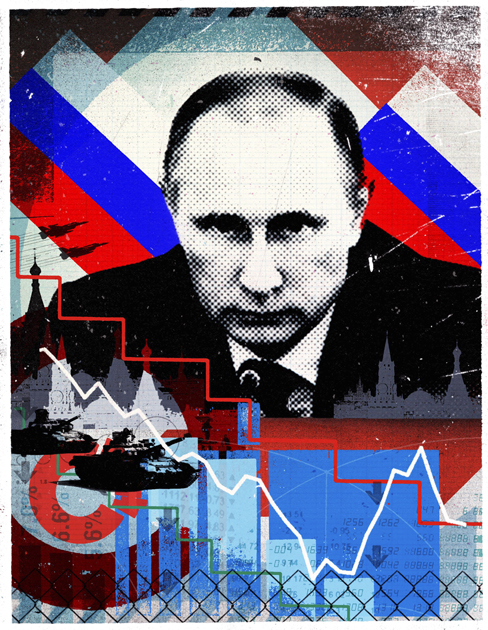 Fly into Moscow on Russia’s national carrier, Aeroflot, and you will be treated to a dose of nostalgia. The flight attendants are decked out in Soviet red, their jackets and hats emblazoned with the hammer and sickle of the Communist Party, which ruled this country with an iron fist during much of the past century.

Don’t be fooled by the airline’s vintage branding. The road from the airport into the city makes it clear that those days are long gone. Dozens of billboards line the highway, pushing not party slogans but modern-day dreams to Russia’s 143 million people: chic global fashion brands, European luxury cars, and much more. Welcome. You’ve landed 23 years after communism’s collapse—in a country that is once again engaged in a game of chicken with the West.

This time around, Russian President Vladimir Putin and his American and European counterparts do not appear to have their fingers poised over their nuclear buttons. Yet the enmity that has riven the two sides is real. It has imperiled multibillion-dollar deals and could ravage business relationships for years to come, as well as pummel the earnings of countless U.S. businesses, from oil producers to investment banks.

The escalating tension this year is depressing. It started with Russia’s seizure of Crimea from Ukraine in March, and it has been followed by a cascading series of punches and counterpunches: U.S. sanctions on Kremlin officials, Putin’s support for Ukraine separatists, more penalties against Russia, and then counter-sanctions as Russia banned the U.S., the European Union, Norway, Australia, and Canada from selling billions of dollars’ worth of fruits, vegetables, fish, and meats to Russia. The downing of the Malaysia Airlines jet over eastern Ukraine, struck apparently in error by rebels using Putin-supplied rockets, killed 298 people and prompted yet another round of sanctions. These restricted credit to some of Russia’s state-owned conglomerates and banks, which, in turn, hampered multiple deals, such as Exxon Mobil’s Arctic exploration with state-run Rosneft.

The downing of the Malaysia Airlines jet over eastern Ukraine, struck apparently in error by rebels using Putin-supplied rockets, killed 298 people and prompted yet another round of sanctions.Photo: Maxim Zmeyev—Reuters

As the winter closes in, Russians are left to wonder just how steep the price of this conflict will be to their post-Soviet comforts. Will Western leaders, despite their tough talk, quietly ease sanctions, especially since the U.S. has dragged into action a reluctant Europe, 30% of whose gas comes from Russia? Eventually, many Russians believe, the fissures between the U.S. and the EU’s 28 countries will make sanctions impossible to maintain. They could be right.

Yet there is another scenario, which, many observers believe, is just as likely: that Putin, with about $465 billion in foreign cash and gold in Russia’s Central Bank, could try to ride out sanctions, perhaps for years, and emerge even stronger (his approval ratings are above 80%) as the Man Who Faced Down the West. “Putin thinks that neither the U.S. nor the EU is prepared for a hot war in Europe,” according to Stanislav Belkovsky, a political consultant in Moscow. By contrast, he says, Putin conveys a sense that he is not afraid of conflict. “For all the problems in the economy,” he says, “Putin has the scent of victory.”

The West’s deteriorating relations with Russia threaten to close off a rich market for consumer goods. Add an anemic projected economic growth of 0.5% next year, due to the weak rube, and Ukraine-related sanctions, and Russian consumers may be pulling back on everything from Pepsi to Hugo Boss suits. here are some brands with major exposure. —Phil Wahba

1. PepsiCo Russia is PepsiCo’s second-largest market after the U.S. with 2013 sales of $4.9 billion. Decades ago, Pepsi was the first Western branded consumer product made there. But sales are starting to falter, and in July, PepsiCo acknowledged the increasingly “challenging” environment there.

2. Danone Russia is the biggest market for the French dairy company, which bought Russia’s Unimilk in 2010. having 24 plants in Russia reduces the impact of sanctions, but the slumping economy is hurting sales.

3. Carlsberg The Danish brewer reduced its forecast this summer: It now expects sales in Russia, where it is the biggest brewer—the company says it commands 39% of the country’s beer market and operated 10 breweries—to full 6% to 7%.

4. McDonald’s Authorities have closed eight McDonald’s restaurants, pending inspections, so far. Russia contributes less than 5% of total company operating profit, but it has been one of McDonald’s few reliable European markets. the company has doubled its Russian outlets over the past five years.

5. Hugo Boss The German clothier has been dropping the franchise model in Russia in favor of company-owned stores, including a new flagship in a trendy Moscow mall. Sales have slowed in Prague and Budapest because fewer Russians are traveling.

Putin has been turning the screws tighter on Western businesses. Food inspectors began raiding dozens of McDonald’s Russian outlets in the summer and shut down several of them for minor infractions. The order included the iconic McDonald’s on Moscow’s Pushkin Square, which crowds thronged when it opened in 1990 as the first American fast-food joint in Communist Russia.

In late September, Russia’s Parliament voted to restrict foreign ownership of local media to 20%, a move that could affect U.S. companies such as Disney, which has a Russian TV channel, and force the sale of the independent Russian financial paper Vedomosti, which is part owned by News Corp.’s Dow Jones and Pearson. Days later, Putin and Iranian President Hassan Rouhani stated that they would no longer settle their bilateral trade in dollars.

The next day, Russian officials announced they were halting the Future Leaders Exchange Program, in which American and Russian teenagers spend a year in each other’s countries. The government insisted the decision was made because a gay Russian student had applied for asylum in the U.S., but to many it suggested just another chill with the American government. Hearing the news, my interpreter, who was 7 when communism ended, slammed her fist in disappointment. “No!” she said, close to tears. “I really wanted my son to work on his English and go to America on the program.”

Indeed, the prospect of isolation from the West troubles young Muscovites accustomed to their wired, global lifestyle. Starbucks’ 38 Moscow cafés are filled with such urbanites, tapping away on their iPads. There’s no chance that Soviet-style isolation will return, but older Russians see echoes of it in today’s crisis. “It is strange how close we are to a new Cold War,” says banking and media tycoon Alexander Lebedev (Britain’s Independent and Evening Standard newspapers are among his vast holdings), who was a KGB spy in the 1980s during the real Cold War. Sitting in his top-floor office suite overlooking Moscow’s gleaming skyscrapers, Lebedev says he believes economic pressure will not persuade Putin to change his policies.

“Russians, even young Russians—80% of them think Putin is right. I thought that the highly educated person would have a different perspective, but most people view the issue as righting a wrong—the wrong being that Khrushchev should have never given Crimea away.”

That may be. But the effects of nearly a year of conflict and sanctions are evident. After years of high growth, Russia, the world’s biggest oil producer, is expected to stagnate next year, with 0.5% growth, according to the IMF. The ruble plummeted to 40 to the dollar in October, about 20% lower than one year earlier. Its free fall has sent Russians scrambling to move money abroad; an estimated $120 billion could leave Russia this year.

There are myriad signs of resistance to Western commerce. French cheeses, Spanish ham, and other delicacies have vanished from supermarket shelves or are now disguised as Turkish or Belarusian, with higher sticker prices. The American-style Chicago Prime steak house near Pushkin Square no longer serves lobster, and its Black Angus steaks now come from a ranch in central Russia rather than Kansas.

The Russia-U.S. standoff is beginning to be felt by American business. In late September, Ford said it could lose about $300 million worth of Russian business this year. Hundreds of deals are frozen as companies attempt to figure out how to comply with new laws. George Kogan, a Russian-born American investment adviser in Moscow, says that years of “fantastic” deals, including numerous IPOs, have run dry: “U.S. hedge funds are all saying, ‘We don’t invest in Russia.’” In Moscow, he says, “people who are handing out jobs and contracts would prefer not to deal with Westerners.” Alexis Rodzianko, president of the American Chamber of Commerce in Russia, says U.S. investment firms are “cooling their heels.”

Most big U.S. corporations operating in Moscow are loath to discuss the sensitivities of U.S.-Russian relations. Many declined Fortune’s requests for an interview. A rare CEO who was willing to speak is Samuel Allen of agricultural equipment giant Deere, back in the U.S. after a trip to Russia. Allen says the sanctions are “certainly having an impact on our business. Some of our customers have had trouble getting financing, and things have slowed down quite a bit.”

Allen says he was struck by the support for Putin. “In our Moscow office,” he says, “we have 300 people. Russians, even young Russians—80% of them think Putin is right. I thought the highly educated person would have a different perspective, but most people view the issue as righting a wrong—the wrong being that [Soviet leader Nikita] Khrushchev should never have given Crimea away” in 1954.

For their part, Russian officials insist they can weather the storm. One government official says that top leaders met last spring to consider the worst possible scenarios and concluded they should build new alliances with China, Persian Gulf states, and others, and begin creating their own products in order to end their dependence on the West. One month later Putin signed a $400 billion deal with China to pipe natural gas to that country for the next 30 years.

The plan sounds optimistic. “If there were an ability to create proper import substitution, it would have been built long ago,” says Andrei Movchan, a co-chairman of Third Rome, an investment group in Moscow. “They failed 100% on that, because they don’t allow private enterprise to flourish.”

Russian tech execs met in Moscow in early October to discuss how to build up their industry, which has lagged for years, as the country imported whatever it needed, largely from the U.S. (where many Russians now work in Silicon Valley). “Oil spoiled us,” says the official. Now Russia needs to innovate, and the record of countries trying to wean themselves from natural resources dependence is, to put it mildly, not good.

As bad as things get, there’s one place in Moscow that reminds Russians that things could be a whole lot worse: the city’s Cold War Museum, which opened a few years ago in a converted bunker. More than 200 feet underground, Soviet officers once monitored the nuclear-bomb control center, braced to launch the missiles that could destroy U.S. targets. Showing a group of locals around the bunker late one night, museum guide Irina Chereponko says the museum “tries to teach the new generation not to repeat the mistakes of the past.” So far, she says, she remains stymied about what to say about Russia’s current conflict with the West. “It will take time to have that perspective about things now,” she says. “Maybe in 30 or 40 years.”