Sandberg on Facebook: ‘We are our own biggest risk’ 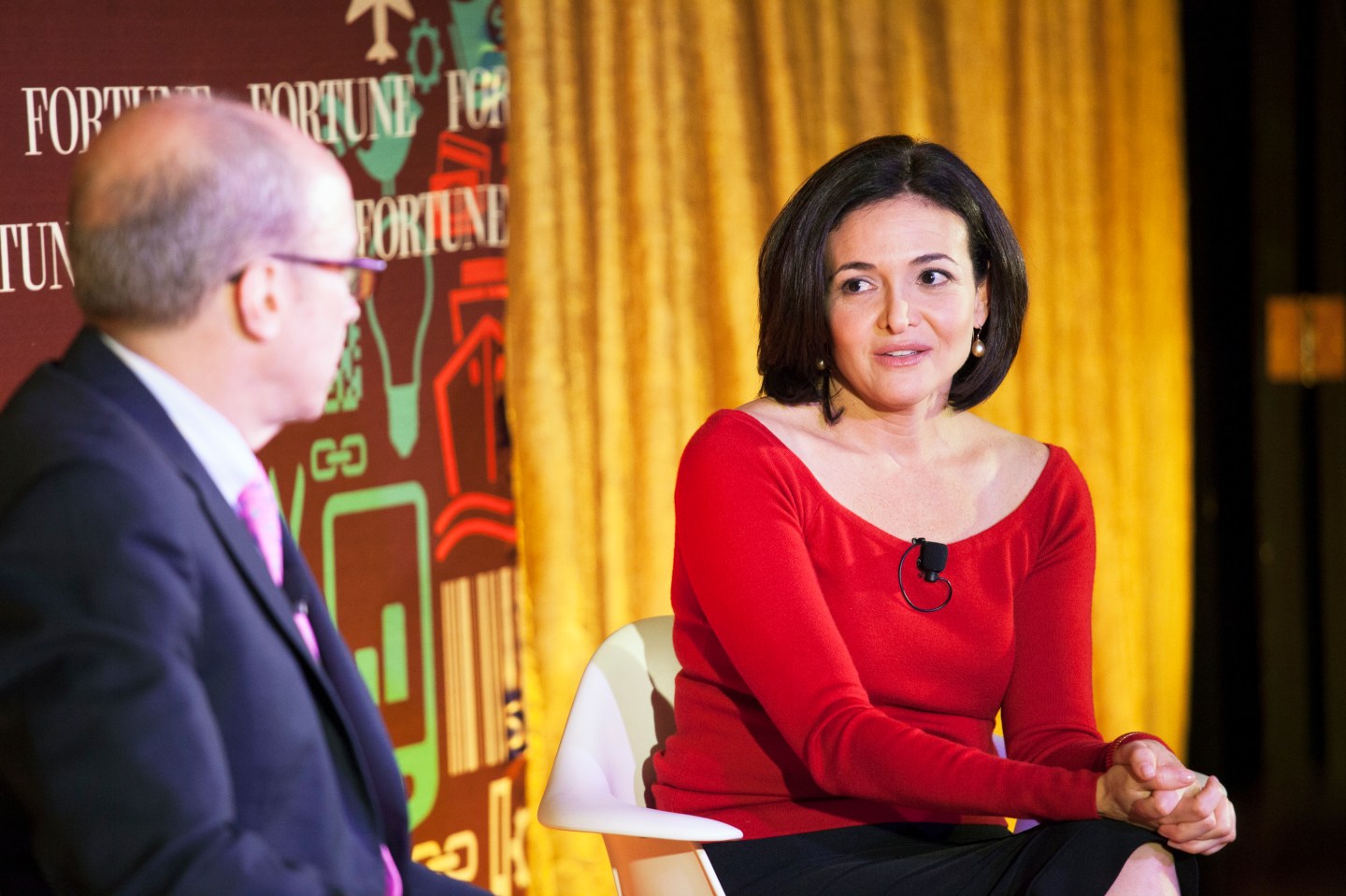 Near the top of Facebook’s most recent annual report—which, I should warn you, runs nearly 100 pages long—the social networking company (FB) outlines its biggest business risks. The first is a tenet of any firm that dares to describe itself with the “s” word. “If we fail to retain existing users or add new users, or if our users decrease their level of engagement with Facebook,” it reads, “our revenue, financial results, and business may be significantly harmed.”

Read a bit further and you’ll come across the second biggest risk to Facebook’s business. It reads: “We generate a substantial majority of our revenue from advertising. The loss of marketers, or reduction in spending by marketers with Facebook, could seriously harm our business.” Substantial, if you’re wondering, is 89% of the almost $8 billion it took in last year.

It is this reason why Sheryl Sandberg, the company’s chief operating officer, was in New York this week. Sandberg, of Lean In fame, was in town for the city’s annual Advertising Week. On Sunday, her company announced that it had rebuilt Atlas, an advertising software suite it bought from Microsoft (MSFT) in early 2013. The new software promises to make cross-device marketing easier. (Or, in the words of Facebook’s own marketing, base it on “people.”)

On Tuesday, Sandberg found herself at a Fortune Brainstorm Tech marketing dinner at Mario Batali’s Del Posto restaurant, explaining to a roomful of marketing and ad executives why even the most basic ad targeting today isn’t effective.

“If you look at how ads are served and measured, the systems we’ve used to do them aren’t working anymore,” she said. “Because they’re cookie-based, they don’t work on mobile. They don’t work offline to online. And they don’t really understand that people have multiple devices. They worked really well when everyone had a desktop computer and nothing else. The old systems don’t work.”

Atlas, she continued, “enables ad-serving and measurement. So that it’s real people and real results. It enables marketers to be more effective and actually reach their target. We think close to 40% of the targeting that is just age and gender, which is the most basic targeting anyone does online, is not getting to the right people.”


What Sandberg didn’t expect was to be put on the defensive by Ello, a pipsqueak rival that has seemingly taken the Internet by storm by professing to never, ever run advertisements. Fortune editor Alan Murray, who interviewed Sandberg during the dinner, asked her about the upstart. She nodded, then threw up her hands.

“I haven’t seen the site,” Sandberg said. “Ever since I’ve been at Facebook, I see things all the time which are like, ‘My Mom’s getting on Facebook, I’m getting off.’ Saturday Night Live did that skit years ago. What really matters is that people get the best product. And they get that by a company being very focused.”

She went on. “People will continue to use Facebook if they understand that we don’t tell who they are to anyone, if they understand that they have control over what they share, and if we build a great product that continues to connect. I think what we’re really focused on is all of those things, particularly the product. What we worry about as we get bigger is, we want to innovate. And so we stay very focused on continuing to ship products.”

[fortune-brightcove videoid=3814526606001]
The 800-pound gorilla in the room, of course, was not so much Ello, whose story has just begun and may prove to be brief. It was the tacit acknowledgment that Facebook has challenged its users’ patience in recent months with changes to its products that cater to its real customers: advertisers. Today, a chief complaint about Facebook is that its algorithms too often show content or ads that are irrelevant to its users. Another is that it doesn’t respect its users’ privacy.

“Neither Atlas nor Facebook tells anyone who you are,” Sandberg said. She would repeat the sentiment, nearly verbatim, later in the talk.

However you feel about Facebook’s business model, it is clear that there is plenty of room for growth. On one hand, the company still trails Google (GOOG) in total ad revenue by a wide margin. On the other, it has fully transitioned into a mobile-first company, receiving more revenue from portable devices than not for the first time in 2014. (“The shift to mobile is the fastest adoption of a communication technology we’ve ever seen,” Sandberg said. “The word ‘online’ is about to be something only your parents say.”) Can Facebook catch up to its Silicon Valley neighbor, just a dozen miles down the road in Mountain View?

“As people transition from offline to online, I think the answer is that we can both win,” Sandberg said. “People are moving online and moving digital. If you look at it right now, mobile is 25% on average of U.S. consumer time and it’s 10% of the [advertising] budget. And as things move from offline to online, I think Google will do very well [and] I think we can do really well.”

She added: “I think there’s room for this pie to grow.” Even as Facebook claims 1 of every 5 minutes a person spends on their Internet-connected phone.

[fortune-brightcove videoid=3814478833001]
The biggest challenge for Facebook, which now counts 8,000 employees and recently celebrated its tenth anniversary, is how it can stay out of its own way on the road to continued growth. “Most companies mess it up all on their own because they don’t execute very well,” Sandberg said. “We are our own biggest risk.”

Editor’s note: Though Sandberg didn’t reprise her Lean In talk, she did remark that there were many women present in the room of marketing executives, and took a moment to conduct an experiment in which she first asked the men in the room to raise their hands if they had ever been told that they were “bossy” at work. (A small handful did.) Then she asked the women. (About four times as many hands went up.)

“If you go to most business dinners in New York or San Francisco, most of the women in this room are used to being the only women in the room,” she said. “That’s what I want to change. That’s what we all want to change.” Joking that a bossy little girl has executive leadership skills isn’t something to chuckle about, she said. There should be as little humor in the thought as there would be for a bossy little boy. “That bias exists in all of us,” she said, “in men, in women, in me.”