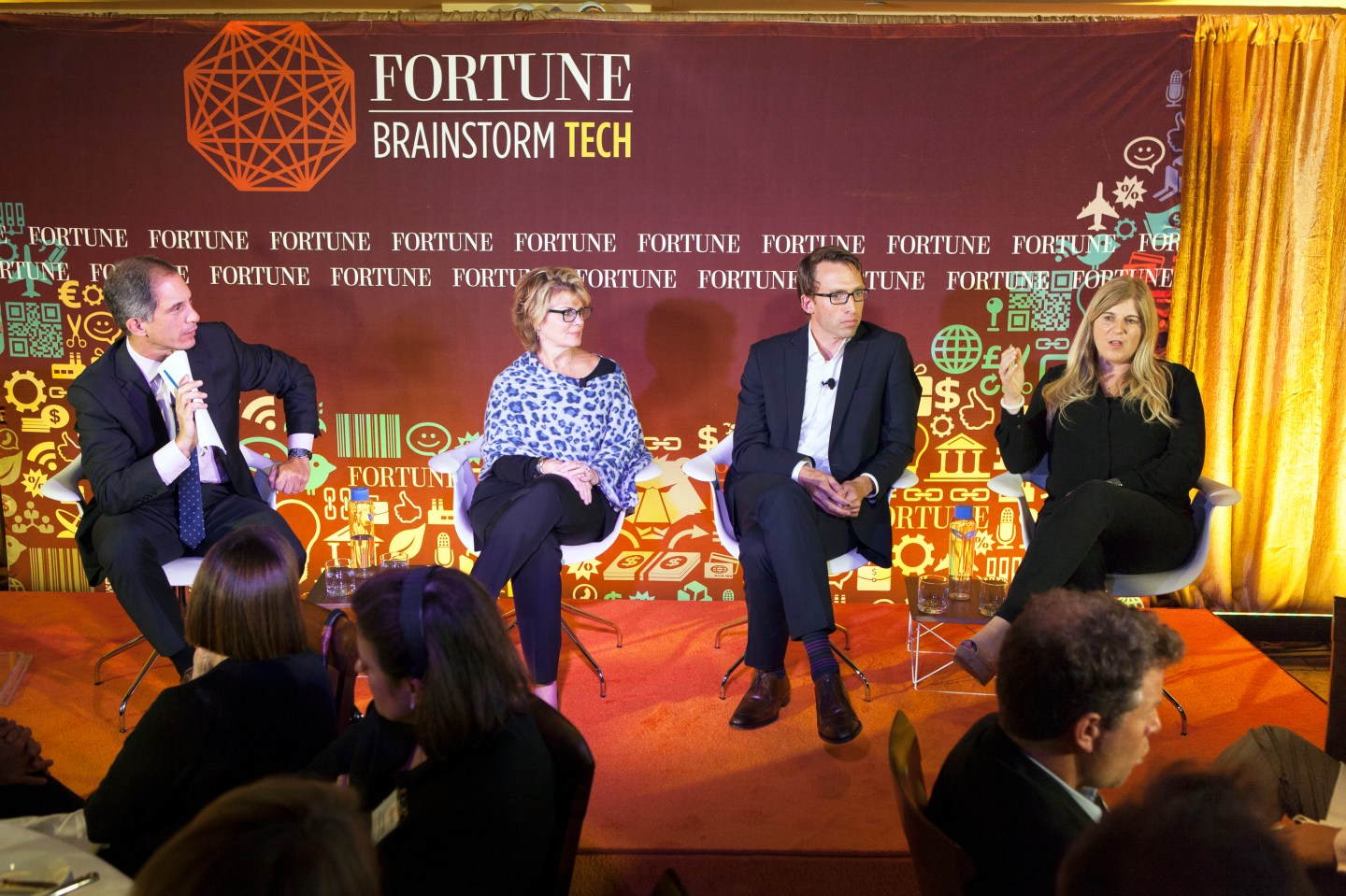 Ever searched for a product online, only to be bombarded soon thereafter with a flood of related suggestions in your Facebook news feed or Google search results?

Now imagine the dinner conversation in Google marketing exec Lorraine Twohill’s household several days after she used her husband’s computer to order “Dora the Explorer” underpants for their three-year-old daughter—subjecting him to at least a month’s worth of misdirected ads for products meant especially for toddlers. Welcome to the Cro-Magnon era of digital marketing, one that Google (GOOG) ironically helped invent.

“It can be a blunt instrument. Some of my most favorite brands, I see them kind of stalking me now,” Twohill said during a panel discussion about emerging marketing technologies at a Fortune Brainstorm Tech marketing dinner Tuesday night in New York.

Many of us are numb to technology-aided personalization except when it’s really irrelevant or rife with offensive stereotypes. But here’s a statistic that should give marketers pause, shared earlier during the evening by Facebook COO Sheryl Sandberg: “We think 40%, close to 40%, of targeting—that’s just age and gender, the most basic part of what anyone does online—is not hitting the right people.”

Sandberg said by far the biggest complaint by Facebook network members today centers not on concerns about privacy, not on frequency, but on newsfeed advertisements that miss the mark. “When you’re going specific, you want it to be relevant. The No. 1 thing we hear from people on Facebook, the No. 1 thing by far, when we ask about ads, is ‘Why aren’t they more relevant?’ ” she said.

Her comments underscore a big distraction for today’s marketing professional: the siren song of sexy, specialized software for social marketing or display advertising, none of which seem to work together, fragmenting the message.

“We need to get back to the storytelling, get back to a brand representing a story, a brand standing for something and telling that story consistently,” said Brad Rencher, senior vice president and general manager of digital marketing for Adobe Systems. “What’s happened, I think is the technology ecosystem, we have done the industry a disservice. We have created tools that are used to do one thing . . . You have to become a specialist to use it and specialists, by definition, exist in siloes.”

Moments later, he added: “Rather than more specialization, I think we need smart generalists.”

When Adobe (ADBE) recently surveyed marketers about their evolving profession, its research found 80% of them think their jobs will morph dramatically over the next two to three years, although only half that number believe they’ll need new skills to handle it. One storyline that remains constant: the marketer’s role as storyteller.

“At the end of the day, how we use the tools, they’re just tools,” echoed Twohill, senior vice president of Google’s marketing team. “The basic core job of a marketer has not changed since the first golden age of marketing, and that is epic storytelling. My number one job is to make sure that people continue to love Google.”

Or to win back that love, as was the case for Bank of America’s global chief strategy and marketing officer Anne Finucane circa 2008, when the U.S. government spent billions to bail out big banks during the financial crisis. Not a popular policy. She joked most people at that time would rather get dental work, without novocaine, than deal with a financial services company.

Repositioning BoA (BAC) required humble, “eyelevel” conversations just as Facebook began hitting its stride and Twitter started emerging as a news outlet. “In reimagining, we had to become more authentic, we had to simplify our thinking, we had to be straightforward about what was valuable to people,” Finucane said. “If we said something that wasn’t authentic or we couldn’t prove, we were going to get rejected.”

She offered the example of a disastrous campaign BoA launched on Facebook maybe 18 months ago, one that failed because it didn’t ring true. Barely three months later, after reconsidering that experience, it introduced a simpler, more genuine message. “It was like magic for us. It sold product, it helped our brand. It created reengagement, but it’s a trial and error.”

“Actually, they’re too savvy,” Rencher said. “At Adobe, the Millennials have reconciled us to the face that we’re not owners of our brand, we’re stewards, and our customers, especially our Millennial customers, want to co-create with us.”

Google’s annual “Doodle for Google” competition—inviting K-12 students to draw a design that might show up as art in its iconic search start page—is a living example. “In hindsight, it was amazing. We took a lot of risks like that with the brand. The doodles themselves, are always a joyful discovery. Because we came from that playful heritage, it has been a lot easier for us to go out and open source ideas . . . We surround ourselves with interesting people, and I really think that’s important today—to not be down a certain path with an agency of record. Surround yourself with all sorts of interesting people who are generating ideas.”

And what about security and privacy (because it would be irresponsible not to ask)?

For a financial services company like BoA, security is preeminent of course, but Finucane declined to get any more detailed with her position on privacy.

Astonishingly, Adobe’s Rencher reveals that just one year ago, security and privacy didn’t rank among the top three concerns for marketers his company encountered (it used to be among the top five). “Now, every time, we’re invited to go talk to a brand, security and privacy—whether their marketer wants it there or their IT or someone else is influencing that—it’s the top three,” he said.

At Google, using technology such as two-step authentication for Gmail accounts to protect user data or dashboards that allow visitors to adjust privacy settings to control what information is collected about them is an ongoing, complicated task.

And then there’s question from an audience member: “Who owns the data ultimately?” Both BoA and Adobe offer the party line answer most big-brand marketers are likely to repeat: my customer, my data.

But for consumers, Twohill’s answer has far more appeal: “The consumer owns the data, that’s why I think controls are so important. The user should be able to know what you know about them and how you’re using it. And they should be able to get out if they want to.”

For a daily dose of business technology news, sign up for Fortune’s Data Sheet newsletter.