Thriving in an Amazon world 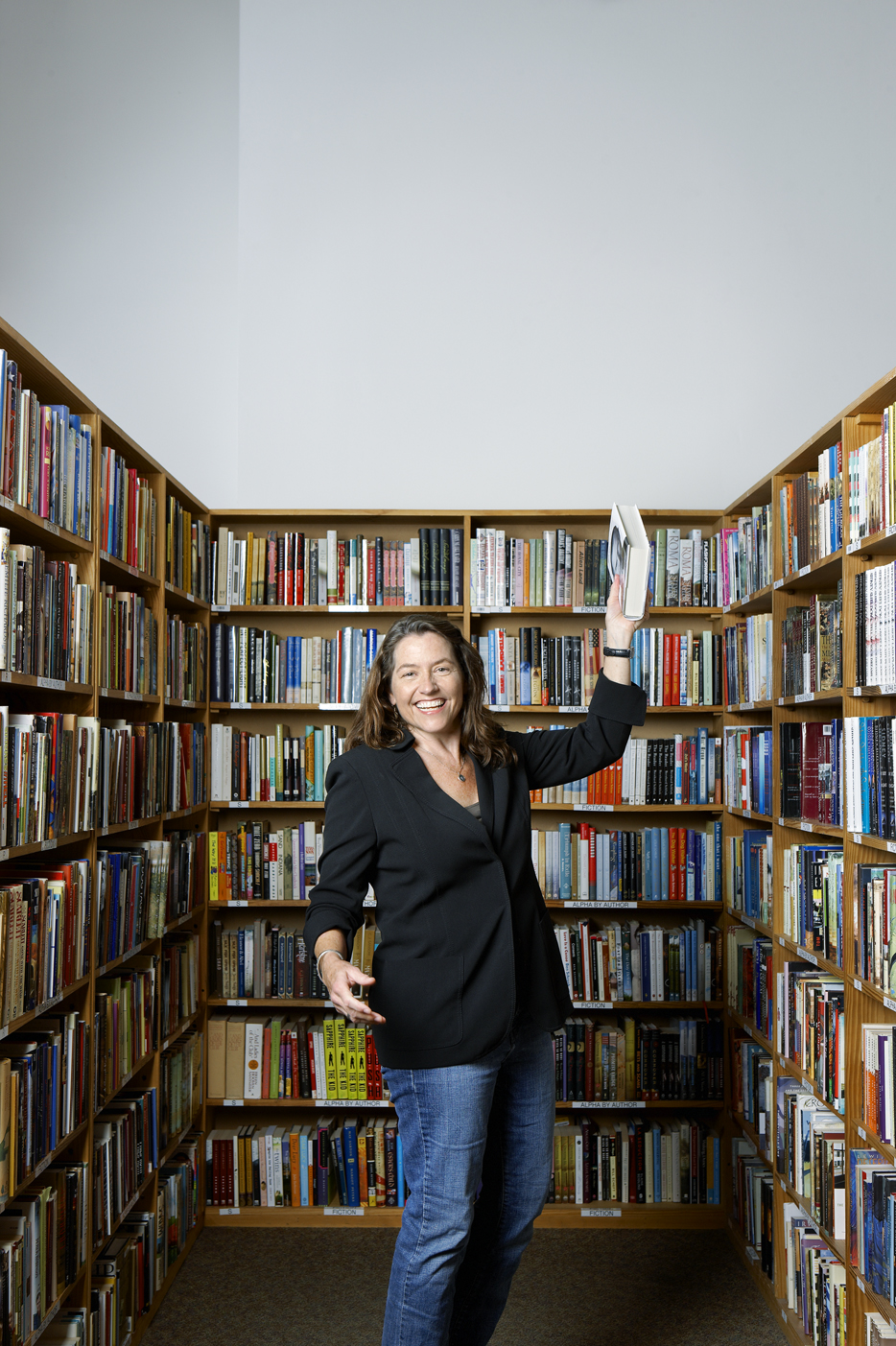 Don’t tell Sharon Anderson Wright that bookstores are a dying industry. The 56-year-old CEO of Half Price Books took a disorganized collection of stores co-founded by her mom—they started by selling used paperbacks and hardcovers out of a dingy former laundromat—and transformed the operation into a chain that is defying a seemingly inexorable tide. While bookstores are shuttered around the country and industry revenue has decreased an average of 3.2% a year over the past five years, Half Price Books is growing. It opens about five stores a year, with revenues rising from $50 million in 1995 to $240 million in 2013. The company is able to resist the Amazon.com tsunami by diversifying its offerings and preserving an in-store experience, while keeping its real estate costs low and remaining debt-free as it expands beyond its 120 retail locations in 16 states. And today the stores still honor their founding promise: They’ll buy virtually anything that is printed (or recorded), excepting newspapers. That’s a proposition that keeps customers returning—in any era.

I was born in Tulsa, the youngest of three girls. When I was 5, we moved to Texas, and my dad became a cuckoo-clock salesman. In 1968 my mom [Pat Anderson] decided to get her psychology degree. Ken Gjemere [pronounced jim-ree] was a buyer for Zales, which my dad sold to, and our families hung out together.

Ken was a World War II vet who was awarded the Silver Star for valor. He became an environmentalist and a staunch peace activist during the Vietnam War years. I always called him our fearless leader. My mom was a protesting hippie type, and they both loved books and recycling. After Ken and Pat separated from their spouses, they moved toward being a couple, and in 1972 they decided to go into business together and start a bookstore. They never married, but every Tuesday they decided to stay together for another week.

They found a 2,000-square-foot location on Lovers Lane in Dallas. It was a ratty old laundromat. The monthly rent was $174. We cleaned it up, built our own shelves, and painted it. We’d load the trucks, unstop the toilet, everything.

As a teenager, I read Kurt Vonnegut, Robert Heinlein—anything science fiction and strange. I was 13, and my job was to sort out the books and shelve them. I became kind of an anthropologist, watching what people read, what they sold and bought.

There weren’t many bookstores at all back then. Ours was an original concept. Pat and Ken wanted to make sure there were affordable reading options for everyone in a comfortable, inviting place to shop. By buying all the items people brought in, they weren’t censoring anyone. We’d pay cash for anything printed or recorded except yesterday’s newspaper, which meant we had current offerings to sell. It was different from other used bookstores, where you traded for books, or high-end antiquarian stores, which intimidated people. We did so well, we opened our second location eight months later in a former meat-storage place.

“My mom had kept all the books by hand. She had written stuff on envelopes…It was a huge challenge to figure out the bookkeeping.”
—Sharon Anderson Wright

It was always a challenge to have cash on hand to pay people. You couldn’t say, “We don’t have the money to pay you.” I don’t know how Pat and Ken managed. But we never were fancy people, so I don’t think we would have noticed any hardships. We ate ravioli out of a can and hamburger casseroles.

In 1976, after I graduated from high school, I became the manager of our store in Richardson, Texas. My dog Dylan and I were the only ones there most of the time. I’d hide the money in a coffee can behind a section somewhere when I needed to go out to get something to eat. In our music section, we bought 45s, eight-track-tape cassettes, Beatles records. Now we have iPads as well as high-end vinyl. It’s come full circle.

Ellen, my oldest sister, is chairperson of the board now. Both of her children are in the business too.

Wright with her mother, Pat Anderson (left), outside their St. Paul store in the late 1980sPhoto: Courteys of Half Price Books

From 1979 to 1981, I worked four days a week as a bookseller in the flagship store and took classes at Richland Junior College. I never got a better offer, and eventually it was obvious I was the one who would stick around. I became Dallas district manager, then general manager in 1990, and started shadowing my mom.

We spent almost every day together. She was a smoker and had chronic obstructive pulmonary disease. She lost patience in her last couple of years. We knew she wasn’t long for this world. The day she died, Ken was partially retired, and I became president and CEO. I was scared to death. It was 1995, and I was 37. My mom was 40 when she opened the first store in 1972.

My mom had kept all the books by hand. She had written stuff on envelopes and little notes. It was a huge challenge to figure out the bookkeeping. In 1995 we had 55 stores, with $50 million in sales. I had had no formal education, and everyone was very patient, teaching me. I had incredibly supportive people who had been there a long time. The head of operations [and] the CFO were all around from the time I was a kid and wanted me to succeed.

“There are still a lot of people who like to browse bookstores and be surprised by what they find. People like to handle paper. It’s the permanency of it.”

I’ve always operated with consensus. People did what they needed to do, and I learned what I needed to learn. We only did what we could afford to pay for, so we always operated on a cash basis. I had my first kid at 40, then the second one at 43. They’re my priority, so I’m often answering emails at 1 to 2 a.m.

Today we have our own publishing arm, and we produce our own stationery, calendars, and CD wallets to sell. Our wholesale division sells to museums, independent bookstores, and Barnes & Noble. We have five to six buyers traveling the country, buying remainders that we can sell at half price. If we buy too much, we sell the extras to Barnes & Noble or others. All of us in the book world feed off each other. There’s competition, but it’s all with great people.

The book industry has changed dramatically because of Amazon, e-readers, and tablets. Stores can’t ignore the fact that you can get just about any book you want while you’re in your pajamas, and it has had an effect on everyone. But there are still a lot of people who like to browse bookstores and be surprised by what they find. People like to handle paper. It’s the permanency of it. We did a survey, and our customers buy 37 books a year. With the recession, we closed three stores, but we’re still profitable.

THIS STORY IS A DOWNER Sales at bookstores (as opposed to at e-tailers such as Amazon.com) have steadily dropped over the past decade.Graphic Source: IbisWorld

The challenges come with huge increases in insurance costs and real estate. We raised our minimum wage to $10 across the board and want to offer good benefits as we grow new locations. So we only take on 8,000 to 10,000 square feet for the majority of our locations. That gives us a much smaller footprint than the big chains, making our real estate costs much lower. Because we are private and don’t have to answer to shareholders, we can expand at our own pace. Plus, our inventory is different than most traditional book retailers’ and is lower in cost, so that gives us a different customer base. We’re trying to be a bookstore, record store, antiquarian store, and comic-book store.

We’ve had people offer us venture capital and ask to franchise or partner with us, but I’ve never seen any gain for us. Borders was in too high-priced real estate and was stuck with new books you get little money for. Barnes & Noble is facing that too, and spent a lot of money on the Nook. We’re the tortoise that’s slow and steady. We just opened in St. Louis, and are looking at Atlanta, Denver, and Nashville. If we can afford it, we’ll do it.

I used to feel insecure about my visions, but now I feel comfortable about them. Fourteen years ago, people thought I was crazy when I wanted to buy 12 acres of land in the heart of Dallas for our flagship store and corporate offices. It was big and expensive, but I was adamant about having the offices connect to the store so that the people running the company would see what others are doing. Our employees are hauling, bending, and lifting, and it’s important for corporate people to see that every day. You get to talk to customers and learn about them too.

We also house our distribution center and the “Woodshoppe,” where we build our own bookshelves and fixtures here. Having the Woodshoppe gives us more flexibility and saves us money, since our locations are all second-generation real estate. We never know what kind of a layout each store will have.

The main location is the only retail location where we own the building and land itself. So this is the only place where we truly have control over our neighbors. We wanted to make the neighborhood better, so we purchased the land across the street. We have Half Price Books and Whole Foods here, and I wanted REI, a like-minded company, to be across the street. So I went to REI in Seattle and convinced them to come. Now I’m trying to handpick other stores that will appeal to our customers, rather than take the first tenant who comes along.

I could have been filthy rich many times over if I’d sold the company. But I didn’t because I would have left the people who did all the work to suffer. Here I do whatever I want, and I’m pigheaded about it. I trust people who tell me when I’m wrong. It’s wonderful to be able to provide 3,000 people with a nice place to work and to be able to donate millions of books to people who can’t afford them. It all makes me pretty happy.