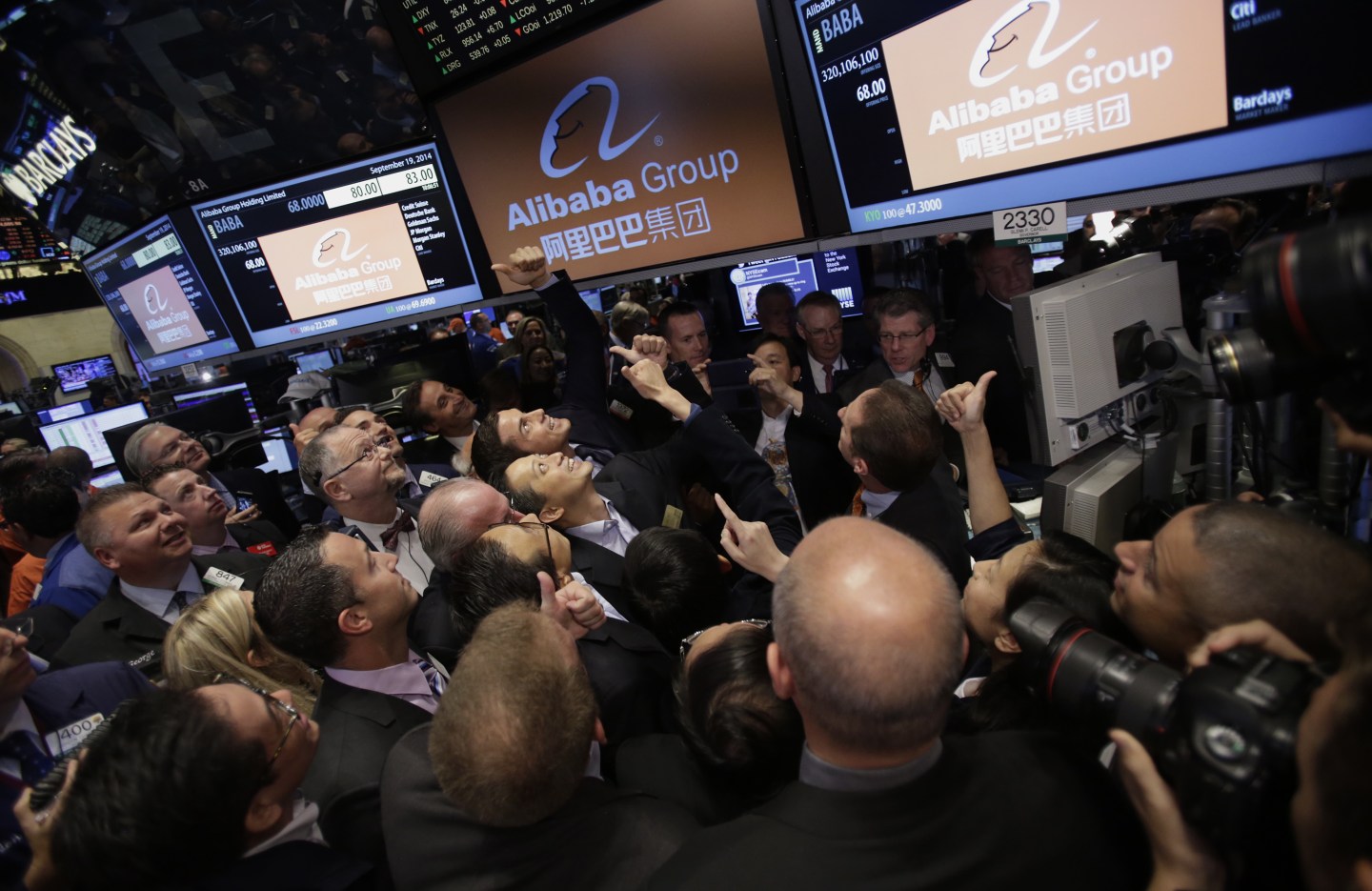 Traders work on the floor of the New York Stock Exchange (NYSE) in New York, U.S., on Friday, Sept. 19, 2014. Alibaba Group Holding Ltd., the e-commerce company started in 1999 with $60,000 cobbled together by Jack Ma, is set to debut in U.S. trading today after raising $21.8 billion in its initial public offering. Photographer: Scott Eells/Bloomberg via Getty Images
Photograph by Scott Eells — Bloomberg/Getty Images

Shares in Alibaba opened significantly higher, at $92.70, on their debut Friday morning.

The stock offering is expected to raise at least $21.8 billion. However, David Ethridge, head of capital markets for the NYSE, was optimistic that underwriters would make use of an overallotment option, which is called a “green shoe,” meaning more shares of the company could be sold. That would push Alibaba’s IPO over $25 billion, making it the biggest in history.

The stock sale places the company in the ranks of the most valuable Internet companies with a market capitalization that peaked Friday at over $240 billion, exceeding industry standard bearers like Amazon (AMZN), Facebook (FB) and Twitter (TWTR). It also puts an exclamation point on China’s rapid rise in the technology industry and its growing ambitions overseas including in the United States.

The Hangzhou, China-based company has started trading on the NYSE under the ticker BABA.

The opening of trading was approached with some caution by the NYSE, however, as Alibaba seeks to avoid a Facebook-style shock.

Alibaba, essentially China’s version of eBay, had initially expected its shares to sell for $60 to $66 in the IPO. But earlier this week, following strong investor demand, it raised the high-end of its expected price range to $68.

Visa previously held the title as the biggest U.S. IPO at $17.9 billion. The worldwide IPO record is held by Agricultural Bank of China, which raised $24.3 billion when it went public in Hong Kong in 2010.

At its offering price, Alibaba’s market value of $168 billion makes it the highest-valued internet company at the time of its public debut. Facebook (FB) was worth $104 billion when it IPO-ed in 2012, and Google (GOOG) was valued at $23 billion in 2004.

Alibaba was co-founded in 1999 by Jack Ma, a former English teacher who has become one of China’s best-known businessmen. The company started as an online marketplace for businesses to sell products to one another but quickly expanded into consumer sales and online payments. Alibaba is now a global hub for selling everything from electronic parts to engines to stuffed animals. It also has a growing portfolio of U.S. investments including ShopRunner, an online delivery service, and ride-hailing app Lyft.

Alibaba is keeping nearly $8.3 billion of the IPO proceeds. A long list of insiders and early investors are also cashing out including Ma, who will make around $900 million, and Yahoo, which sold about a quarter of its stake for more than $8 billion.

Alibaba enters the market during a stellar year for technology stocks. The Dow Jones Internet Composite Index is up 15.6% over the past 12 months compared to a 9.9% rise for the overall Dow Jones Industrial Average.

Investors are hoping Alibaba can continue to ride this wave to even higher stock gains after its debut.