Apple’s iPhone 6 and 6 Plus: The reviews are in 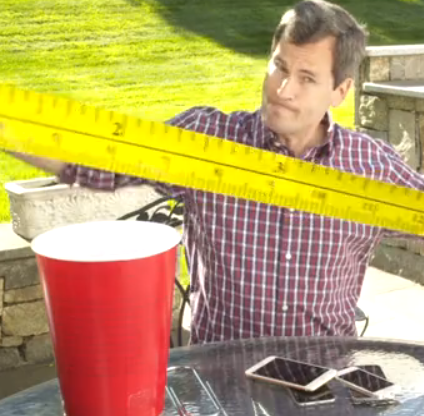 Joshua Topolsky, Bloomberg: Big vs. Extremely Big. “I don’t know if you’ve heard, but there’s a new iPhone. Two, actually. The iPhone 6 and the iPhone 6 Plus. This isn’t just a regular phone release from the cats in Cupertino. With the new devices, Apple enters a market in which it has literally been unable to compete: the market for big, big devices, currently dominated by Korean giant (and Apple nemesis) Samsung Electronics and its Galaxy S line of Android phones. According to court documents revealed earlier this year, Apple executives lamented the company’s lack of a larger phone in a marketing slideshow. “Consumers want what we don’t have,” read one slide as it showed the growth of the jumbo-phone market… Well, so much for that problem.”

“Molly Wood, New York Times: With New iPhone 6 and 6 Plus, It’s What’s Inside That Counts. “After almost a week of trying the phones, it became clear that the hardware was not the best part of the package. In its quest to deliver bigger phones to a market clamoring for them, Apple has made one phone that is actually a little too small and one that’s a little too big.”

David Pogue, Yahoo: iPhone 6 Is a Thin, Sexy Phone with a Killer Camera. “The iPhone 6 and iPhone 6 Plus are absolutely terrific phones. They’re fast and powerful and well designed. There’s not a single component that hasn’t been improved. These phones are a delight to behold and to be held… You will hear — and it’s true — that Apple did not pioneer many of the iPhone 6’s big-ticket features. Other companies’ phones were first to introduce bigger phone screens; “always listening” voice commands; wireless payments; predictive keyboard words; phase-detection autofocusing; time-lapse video; optical image stabilizers; VoLTE calling; and so on. That’s right: Apple has adapted features that first appeared on Android. Just as Google has adapted many features from Apple.”

Harry McCracken, Fast Company: Bigger and better, but still your old phone. “From the start, Apple has never attempted to make its phones do everything; it’s just tried to make them do the things they do as well as possible. It’s not an approach designed to please impatient types. But by keeping people waiting for much-requested features, the company bought the time to do them right in the iPhone 6 and 6 Plus. iPhone fans, your life is about to get better–and the smartphone wars are going to get more interesting for everybody involved.”

Walt Mossberg, re/code: It’s a winner. “Apple says the new iPhones have faster Wi-Fi and faster cellular LTE. In my tests, I found the iPhone 6’s Wi-Fi speeds — both downstream and upstream — were roughly double those of the 5s, and about 25 percent faster than those of the Samsung Galaxy S5. But I saw little difference in LTE speeds, either on Verizon or AT&T… In my daily use, the iPhone 5s generally lasted from eight to 10 hours between charges. But during my week of testing, the iPhone 6 did better, going 14 or 15 hours. Most people will still have to charge it nightly, but won’t be hunting for plugs during the day… The iPhone 6 is a great upgrade for current iPhone owners, or for anyone, really. It manages to provide a much larger display in a phone that’s still small enough to handle easily. It’s my recommendation for the best smartphone you can buy.”

Geoffrey Fowler, Wall Street Journal: Apple’s Cure for Android Envy. “Apple’s biggest advantage over Samsung is the simplicity and style of its software. The latest overhaul, iOS 8, also lays the foundation for new ways for apps to work with us, and with each other. For those worried about security and privacy, the iPhone still offers the best protections for most of us. Apple took heat when celebrity iCloud accounts got hacked, but its app store has far less spyware and the iPhone’s software is less open to hacker manipulation than Android’s. Apple’s strength is choosing the technologies that really matter and taking them mainstream. The iPhone 6 sets up Apple to make good on the long-promised evolution of the smartphone into a wallet and a companion for a universe of personal devices and data, including the forthcoming Apple Watch.”

Darrel Etherington, Techcrunch: Meet The New Best Smartphone. “If Apple has faltered anywhere with design, it might be that protruding iSight camera lens on the back, which sticks out a tiny fraction of an inch thicker than the rest. It’s something that hasn’t yet caused me any issue in daily use, but it does seem like a potential area for grit build-up, and it also means that the phone will be resting on its lens when placed face-up on a flat surface – though that’s somewhat mitigated by the use of sapphire in the lens cover.”

David Pierce, The Verge: Giving the people what they want. “The whole time I’ve had the iPhone 6, I’ve been playing a game. I hand the phone to someone, and guess what phone they use based on their immediate reaction. iPhone users are always shocked by the sheer size of the 6; they all think it must be the 6 Plus. Android users, on the other hand, are unfazed. “This looks just like my phone,” they all say… The iPhone 5S was a stark piece of jewelry, a gorgeous object that was slightly cold and unapproachable. The iPhone 6 is far friendlier and far more usable. Mixing form and function this way is hard to do, and Apple gets it largely right.”

Brad Molen, Engadget: Bigger and better, but with stiffer competition. “This year’s iPhones aren’t groundbreaking, nor are they perfect. But they demonstrate something far more important to Apple’s success in the long run: freshness. Apple ditched the tried-and-true square design (which I’ve always been fond of) for a more rounded, modern look; it added features that should’ve been there ages ago (NFC, anyone?); and it made the phones large enough to start competing in a hotly contested space. No doubt about it, the iPhone needed to grow in size and function, and it did just that. Fortunately, it made the leap before it was too late.”

Stephen Fry, Guardian: The most exquisite mobile ever made. “There’s barely space for me to talk about the extraordinary new Wi-Fi calling option, which allows you to hold a conversation using wireless at home or the office and continue seamlessly as you move out of WiFi range – allowing the LTE (4G) mobile network (EE in the UK’s case) to take over without a blip with Voiceover LTE… It only needs for me to leave with the confident prediction that these phones will prove through sales, as I believe them to be, the best and most beautiful mobile telecom technology ever yet produced.”

Ed Baig, USA Today: iPhones 6 and 6 Plus are a very big deal. “Are the bigger iPhones worth all this big time attention? The answer is a resounding yes, a point emphasized by consumers who’ve preordered the 4.7-inch iPhone 6 and 5.5-inch iPhone 6 Plus in record numbers. These are the phones Apple devotees have been waiting for: iPhones that measure up to what’s fast becoming the new normal — the large, modern smartphone display. Count me among those glad they’re here.”

Jim Dalrymple, The Loop: iPhone 6 and iPhone 6 Plus. “I found nothing significant in my week of use with either iPhone 6 model that would lead me to any other conclusion than to recommend both. Choose the one that fits your lifestyle the best and be happy.”

John Gruber, Daring Fireball: The big picture. “A few days into testing the new iPhone 6 and 6 Plus, I accidentally left my personal iPhone 5S on a desk next to the iPhone 6 Plus. While my back was turned, the Plus tried to eat my 5S. It’s a monster.”