Hands on with Apple’s new Watch and iPhone 6 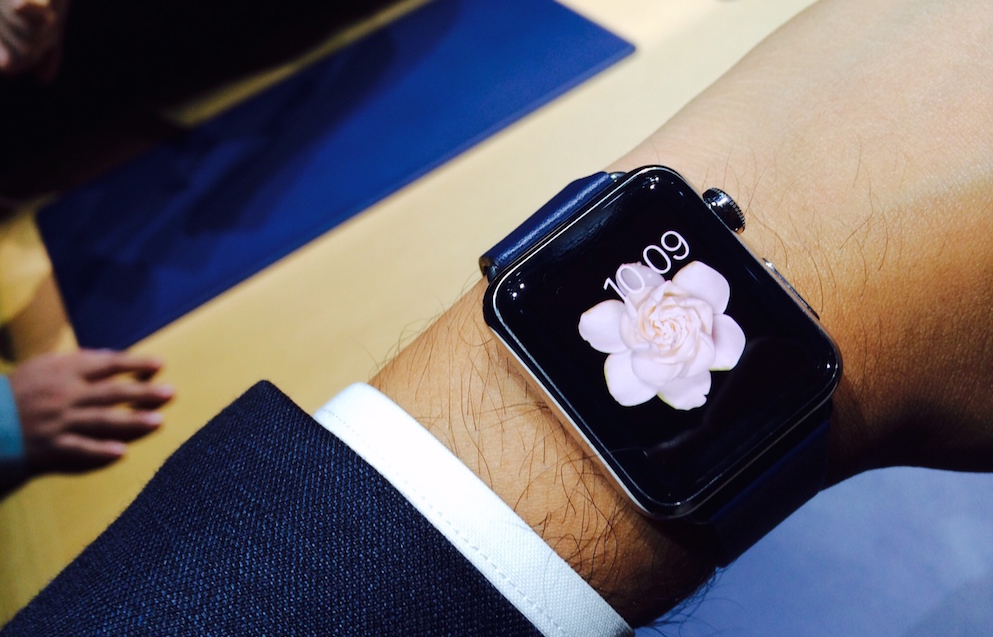 Apple's iWatch up close and personal.
Courtesy of JP Mangalindan/Fortune.com

On Tuesday, Apple unveiled a new bigger iPhone and the smartwatch aficionados have been waiting for. Fortune had 30 minutes to try them both out. What we found in our limited test were two impressive devices in keeping with Apple’s reputation for innovation and design. But some questions still remain.

Apple’s new smartwatch arrives amid a watch boomlet from companies like Samsung, Sony (SNE), and Motorola. When Apple Watch arrives early next year, the $349 device (at least for the low-end design) will come in two different watch face sizes with wrist straps made of leather, synthetic materials and metal. Its 1.5- and 1.65-inch displays use scratch-resistant glass. Sensors on the back of the watch face detect a user’s pulse to track things like calories burned and distance walked or run.

Up close, the Apple Watch is among the sleekest smart watches on the market, matched only in looks by Motorola’s Moto 360. Most smart watches look clunky or uninspired — just a few rungs above those kitschy calculator watches made popular in the 1980s. But Apple’s does a good job masquerading as a slick, traditional timepiece. It’s just small and thin enough — even for folks with smaller wrists like myself — and the premium wrist straps provided in the demos feature the kind of materials found in Swatch or higher-end time pieces.

The watch I spent time with was a size 38 — Apple will sell two sizes, 38 millimeters and 42 millimeters — with the leather strap made of the same thin, flat material used in Apple’s leather iPad cases. For an iPad case, it’s nice, actually, and keeps bulk to a minimum. But when used for a watch strap, that same thin, flat material felt sort of cheap to me. That’s a matter of opinion, of course, and users will have watch strap options, regardless.

On the right side of the watch face are two buttons — a dial called the “digital crown,” which operates a lot like the crowns people used to wind up their old watches. Only here, that dial helps to navigate menus on the screen. Screwing the dial left and right zooms in and out on the apps featured on the main screen. Meanwhile, pressing a button below the digital crown brings up a brief list of favorite friends and family members.

Apple argues this feature will become popular with people seeking a shortcut to quickly access their contact list. As an example, Apple SVP of Operations Jeff Williams measured his heartbeat with a watch and sent it to one of his buddies, in this case, Apple SVP of Internet Software and Services Eddy Cue, who was onstage.

In the real world, I can’t see pulse-tracking being shared this way at all, but I can see this becoming useful if I want to dictate a text to a friend while out jogging. Apple also made a big deal over two new fitness apps — one for tracking my movements everyday, the other for tracking specific activities like a 5-mile run — but I wasn’t able to test those out.

If you’re not used to larger smartphones from Samsung and the like, cradling the larger iPhone 6 in one hand will come as a shock. This thing is thin-and-light, but it’s big, like a miniature iPad Mini. At 4.7-inches, the smaller iPhone 6 is just .2 -inches larger than the iPhone 5, so the difference there is negligible.

But both models now sport an aluminum back that curves around to the front, so there are less seams or gaps in the body. Despite being lightweight, they feel extremely well-made, even more so than the iPhone 5S. A new A8 chip inside zipped along while surfing the web or switching among apps I had open, but the 5S isn’t sluggish either, truth be told. How the iPhone 6 handles 3-D graphics-heavy mobile games should be a better indicator of how powerful Apple’s new chip is.

While Apple’s latest devices seem impressive on first blush, questions remain. Wearable tech, particularly watches, are such a new device category, it’s unclear whether there’s a huge appetite for them, even those sold by Apple. (Do enough Apple users want a watch that communicates with their phones?). Apple also failed to mention the watch’s battery life, a feature CEO Tim Cook bragged about for the iPhone 6 — a worrisome sign, but it also could be because the Apple Watch doesn’t hit until next year. Meanwhile, the iPhone 6 is well-made, but the company’s Apple Pay payment system, which works via a chip inside the phone, could see the same fate as Google Wallet if enough retailers don’t sign-on. But at least one thing was clear: Apple intrigued people — a lot of people — on Tuesday. So mission accomplished.

For more, check out Time senior editor Matt Vella’s Apple Watch impressions, and keep an eye out for Fortune’s full reviews of the iPhone 6 later this September and Apple Watch early next year. But don’t let that stop you from weighing in now. What did you think, Fortune readers? Did Apple deliver, or fall flat? Weigh in with comments below.