How sports events like the U.S. Open are going green 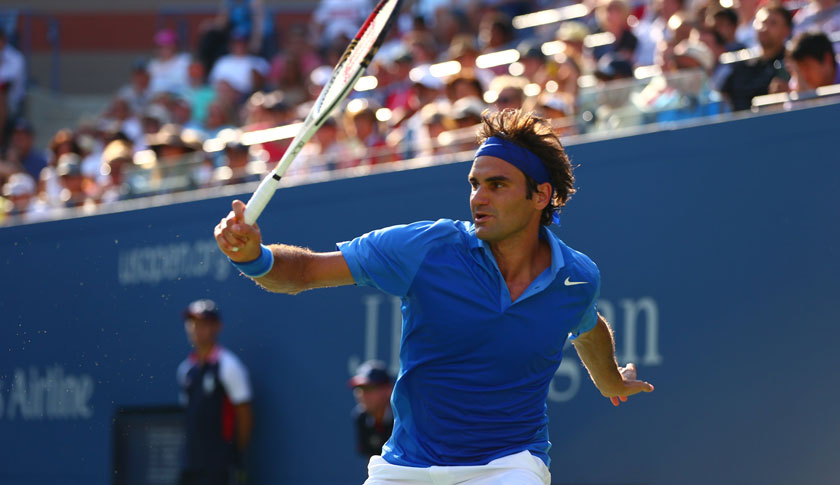 U.S. Open tennis fans may not see many big changes at the event as they watch Roger Federer and Serena Williams battle on court. But over the past few years, organizers have made a number of subtle adjustments like giving visitors recyclable cutlery at the tennis center’s restaurants.

Why? Because like many other sporting events, the U.S. Open is going green.

A behind-the-scenes tour of the sprawling Billie Jean King National Tennis Center showed the environmental efforts at the world’s biggest tennis tournament. It’s a huge undertaking that involves hundreds of tennis players and workers, along with 700,000 fans.

Lauren Kittelstad Tracy, a senior manager for strategic initiatives with the United States Tennis Association (USTA) who heads up environmental efforts at the Open, led the tour around the grounds under a blazing New York City sun. The first stop – Arthur Ashe stadium with its over 20,000 seats, before the morning’s play.

She showed off trash and recycling chutes that are accessible from all three levels of the stadium. They funnel recyclables and compostables to compactors on the ground level.

“The program has been a tremendous success on all fronts for the USTA,” Tracy said about the overall green initiative. “We find the true value in being a good corporate citizen and environmental steward.”

To meet its mission, the USTA has partnered up with a number of environmental organizations. Chief among them is New Jersey-based LEED consultancy firm “eco evolutions.” Bina Indelicato, the firm’s CEO, “is the brain” behind the programming, according to Tracy. There’s also the Green Sports Alliance, a group of 230 sports teams and venues from 20 different sports, that the USTA joined in 2012.

From an internal, human resources standpoint, the USTA uses an “it takes a village” approach. Throughout the year and also during the event, the heads of departments like player transportation and food services meet to discuss ways to be more environmentally-friendly and get training, Tracy said.

The USTA isn’t alone in its green efforts. It works with the organizers of the other Grand Slam tournaments — the Australian Open, Wimbledon and the French Open — on best practices.

In sports, going green is all the rage. In July, the NHL issued its first sustainability report, a first for a North American pro sports league. More recently, the San Francisco 49ers’ have built what its owners describe as the greenest stadium in the U.S., including the most extensive use of recycled water on the field.

Studies like one from the Harvard Business School have shown that going green helps businesses. Wayne Balta, environmental affairs vice president for tech giant IBM (IBM), said in an article: “Thankfully, business leaders have come to realize that decisions about environmental sustainability have to reflect an unambiguous, long-term commitment. The reason is simple: it makes good business sense.” Notably, IBM helps provides match stats for the Open and has a control center inside Arthur Ashe.

The U.S. Open does indeed save money, according to Tracy.

“For instance, our boiler in Arthur Ashe Stadium was changed from electric to gas-fired reducing the ecological impact while providing a projected savings of over $100,000 per year,” Tracy said. She declined to disclose the cost of the boiler, which provides heating within the stadium.

From 2008 to 2012, the USTA says it’s reduced waste from sources like food by as much as 850 tons, cut greenhouse gas emissions by 1,100 tons, and recycled over 1.5 million plastic bottles. Additionally, the USTA buys carbon offsets for the emissions from 2.2 million miles of air and local transportation by player travel.

Of course, despite the efforts, the U.S. Open still creates a big environmental impact. How much, exactly, is unclear.

Making the tournament green has been — and will likely continue to be — a long process. Most new initiatives need to be phased in. Because the event only runs only two weeks annually, extensive planning is necessary during the rest of the year. With perhaps a tinge of jealousy, Tracy said that other sports like the NHL or the MLB have seasons spanning months during which they can push environmentally-friendliness and make tweaks to their initiatives more efficiently.

In terms of tennis, the tournament collects used balls and donates them to junior tennis programs. Officials also collect aluminum lids from ball cans for recycling.

This year, first the time time, the tournament can compost organic waste from everywhere on site including kitchens, from fans in the food court and restaurants in the stadiums.

“As a result of this program, we have collected 425 tons of waste and turned it into compost for landscape and farming uses,” Tracy said.

From a branding perspective, getting fans to understand the arrays of offerings can be tough, especially with so much taken for granted. The USTA used social media this year in an attempt to “engage our fans in our green program” and to get them “excited to make environmentally friendly decisions while on site,” Tracy said.

But in the end, fans pay more attention to a well-struck backhand than a tiny green sign in a flowerbed announcing the dirt is composted material from the last year’s food court waste. Signs inevitably go unread, bottles are flung into incorrect bins or left in the stands for someone else to throw away.

On the final stop of the tour — the food court — Tracy mentioned what she’s most proud of this year. Like many of the programs, it’s no surprise she picks something subtle: Signage in the corporate suites in Arthur Ashe Stadium that quote legendary tennis champion Arthur Ashe.

“Start where you are, use what you have, do what you can,” the signs say.