For today’s drone pilots, the sky—and the law—is the limit 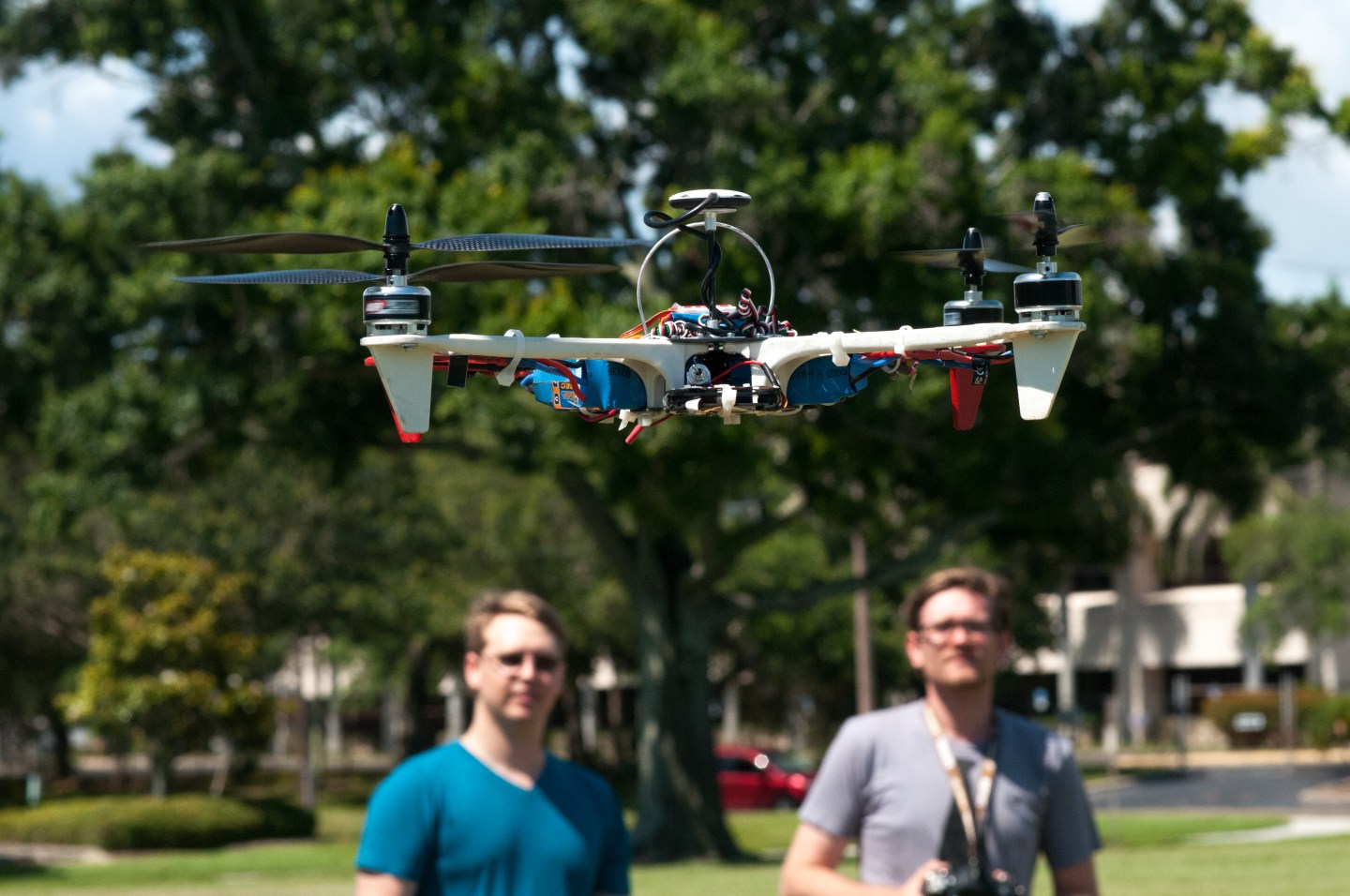 Kevin Lupex and his friend Greg LeCompte stand in a small soccer field, awash in the sea-salt air and unyielding sun of St. Petersburg, Florida. A large, complicated remote control is slung around Lupex’s neck. At his feet is a helicopter the size of a small dog, with four horizontal propeller blades—the sort often referred to as a quadcopter, or a drone.

In cargo shorts and t-shirts with ironic messages on them, Lupex and LeCompte, both 25, look like two laid-back college buddies playing with a fancy toy. But when they started building and flying drones about four months ago, they did it for their careers as much as for fun. Lupex is happy enough with his current work as a server at a beachside Italian restaurant, but he sees explosive potential in his little plastic flyer.

“Just being on the pioneering front of this could land you a job,” Lupex says, before rattling off potential uses for drones, from Hollywood films to sporting events to dangerous inspection work. The Association for Unmanned Vehicle Systems International cosigns his enthusiasm, estimating that unmanned aircraft will generate 100,000 jobs and $82 billion in U.S. economic impact by 2025.

There’s one tiny problem: commercial drone activity is still illegal in the U.S. Current laws require drones to be certified by the Federal Aviation Administration, that each flight be FAA approved, and that each pilot have a traditional private pilots’ license, which requires hundreds of hours in the cockpit of a real airplane. To date, just one unmanned drone operation, run in Alaska by ConocoPhillips (COP), has ever met those criteria.

The FAA will propose new rules by the end of this year, but statements from Jim Williams, manager of the FAA’s Unmanned Aircraft Systems Integration Office, indicate that approval could take up to three more years. There’s also no promise that the new rules would be looser than current ones, though the FAA does say they may offer limited exemptions to existing rules soon.

Preparing for that day, Lupex and LeCompte are learning drone technology and operations inside and out while operating as hobbyists. They built their machines from parts, and Lupex’s ‘copter has the patched-together look of an ambitious high school science project, covered in exposed wire and control boxes, and held together in some places with zip ties.

Watching the thing in flight conjures up a unique, slightly unnerving variety of the wonder humankind has always found in flight. Its high power to weight ratio makes a quadcopter stunningly maneuverable, tracing tight turns and easily holding fixed positions, whether a hundred feet up or four feet off the ground. Even in 15 to 20 mile per hour winds, the drone is uncannily steady, its GPS and flight control systems compensating for every gust.

Lupex sends the drone zooming straight up, to what might be a little above the 400 foot ceiling for recreational unmanned aircraft. “Nobody really enforces that much,” he notes, laughing. The machine looks like it could easily go higher.

Lupex estimates that he’s spent about $800 on his quadcopter so far, and he plans to spend more on upgrades such as a First Person Video rig that would allow piloting the machine through an Oculus Rift-style headset. His ‘copter has about 15 pounds of thrust, he says, and weighs only 4 pounds, meaning that it could in theory serve as part of the drone delivery network being planned by Amazon (AMZN). Lupex thinks that’s a long way off, though, due to technology if nothing else. “I only get 12 minutes of flight on this battery,” he says. “I don’t know how that would work.”

That $800 includes quite a few replacements for parts broken in crashes, such as when a miscalibrated GPS connection sent Lupex’s quadcopter zooming out of control over St. Petersburg’s Venice-like canal neighborhoods. He frantically tracked it, following a trail of curious onlookers. “They’re like, ‘Did you see that thing? What was it?’, and I’m like, ‘Which way did it go?”

Finally, Lupex found that his ‘copter had crashed into the roof of a house, then fallen to the ground. Its rotors kept spinning full force until the home’s owner poked it into submission with a broomstick, breaking all four rotors. Lupex was grateful the episode didn’t end with his investment in a canal, or worse.

“Anything falling out of the sky that’s five pounds will probably kill you,” he points out.

Ground crashes are just one reason for heightened regulatory caution, even if a rulemaking process that might stretch into 2018 seems out of sync with widespread reports of drones already being put to commercial use against regulations.

“We are trying to draft regulations that will ensure the safety of the busiest, most complex airspace in the world,” says FAA spokesperson Les Dorr. That includes the very likely scenario of drones sharing at least some airspace with conventional aircraft, which, if mismanaged, could easily lead to major accidents.

In the meantime, the FAA is studying the possibility of some exemptions for applications posing no threat to anyone on the ground or air. Dorr offered a closed movie set as one possible candidate for this exemption process.

Back at the soccer field in St. Pete, something has gone terribly wrong. About a hundred feet in the air, there’s a tiny metallic sound, and Kevin Lupex’s quadcopter does a tight aerobatic flip. Then it goes into an automatic landing sequence, bouncing to a stop on the grass just short of a sidewalk. Lupex and LeCompte examine the ‘copter, finding that an antenna somehow struck a rotor, ripping off the antenna, overheating a motor, and cracking a strut.

“Looks like we won’t be flying any more today,” Lupex says with a smirk.

He shrugs. “That’s just the reality of it. There are a lot of accidents.”