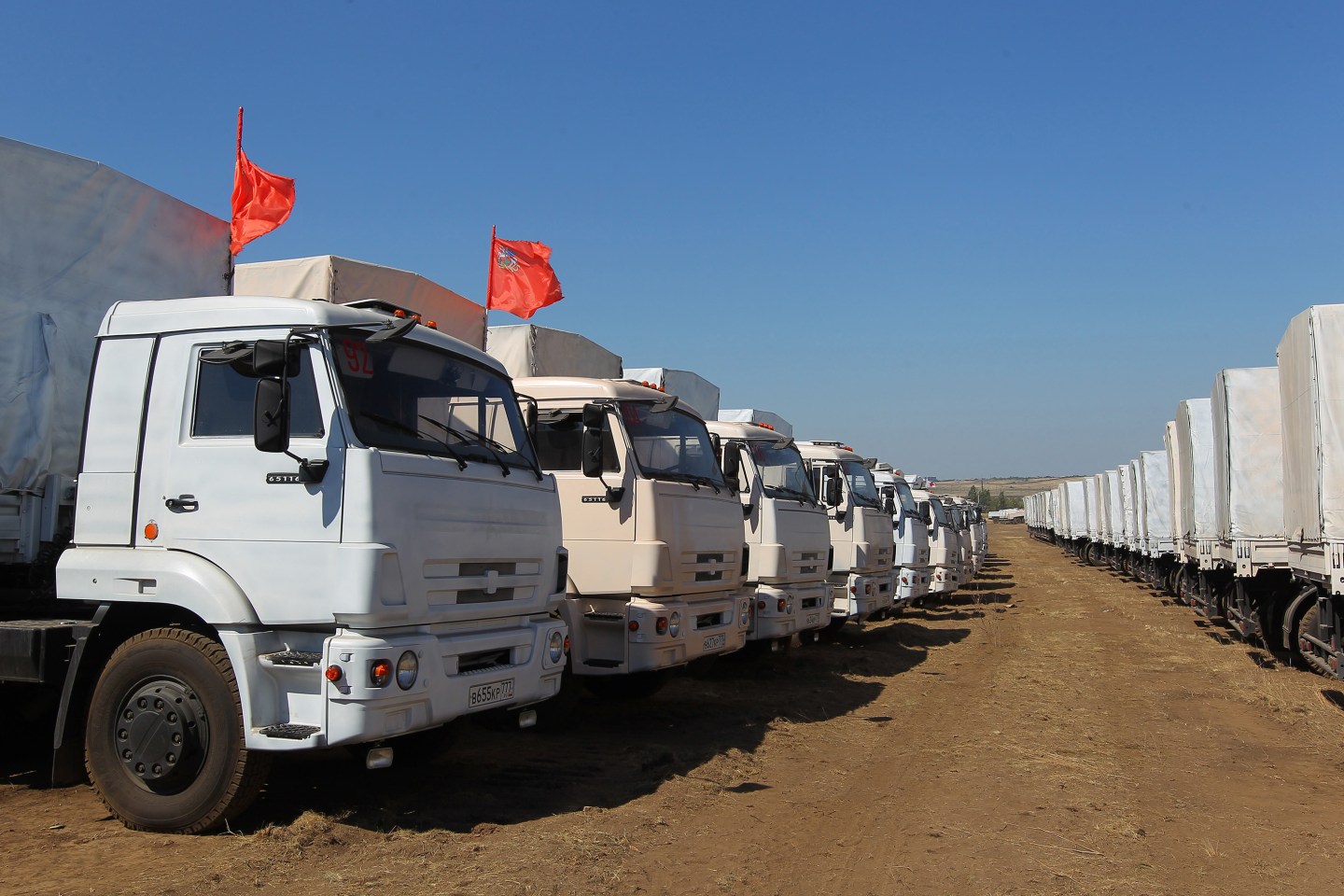 ROSTOV, RUSSIA - AUGUST 15: Aid convoy is parked carrying humanitarian aid for people in Ukraine at the Ukrainian border in Rostov-on-Don region, Russia on August 15, 2014. The Ukrainian government use all means available to block the convoy if the Red Cross is not allowed to inspect the trucks. (Photo by Fedor Larin/Anadolu Agency/Getty Images)
Anadolu Agency--Getty Images

Stock markets fell sharply Friday on reports that Ukrainian forced had engaged and inflicted casualties on Russian armored units that had crossed the border into eastern Ukraine, in a development that appeared to make a full-blown war between the two countries much likelier.

In a statement on his office’s web site, Ukrainian President Petro Poroshenko said that his army’s artillery had “partially destroyed” a column of Russian armored vehicles that had crossed the border on Thursday night.

The comments, made in a summary of a telephone call to U.K. Prime Minister David Cameron, confirmed reports in the British newspapers The Guardian and The Daily Telegraph of around 20 armored personnel carriers heading towards the border from the Russian side. Reuters also cited NATO Secretary-General Anders Fogh Rasmussen as confirming the incursion.

After rising earlier on the day on reports suggesting that a tense stand-off over a Russian convoy carrying aid to the besieged regions of Luhansk and Donetsk had been defused, U.S. and European markets tumbled, with the S&P 500 losing 0.6% and the German DAX index closed down 1.4%. The yield on the 10-year German govenment bond, a traditional “safe-haven” asset, plunged below 1% for the first time ever, to trade at 0.96%, while the 10-year Treasury yield fell to 2.33%.

Russian media reports earlier Friday had carried government denials of any armed incursion. Russia and Ukraine have traded arguments and claims over the conflict since it erupted in April, and Kyiv has protested increasingly in recent weeks that Russia is not only supporting the rebels with men and equipment, but also firing on its troops from its side of the border. Russia denies that and has claimed that Ukrainian forces have killed people on its side of the border with their shelling.

Tension has been mounting since Tuesday, when a convoy of 280 Russian trucks set off from the Moscow region towards Ukraine, ostensibly carrying humanitarian aid such as food, water and sleeping bags. Random checks by western reporters travelling with the company discovered nothing untoward Friday morning, and agencies subsequently reported that Ukrainian border guards had begun to inspect the convoy, apparently preparing to let it into the country, under the auspices of the Red Cross.

A Red Cross spokeswoman told Fortune that her organization still hadn’t received the necessary assurances from all parties to proceed with that work.

However, the Russian Foreign Ministry said the convoy would have to change its agreed route, citing unspecified reports that Ukrainian militia were preparing to mine the road to Luhansk.

“There is now evidence of direct threats of the use of force against our convoy,” the Ministry said, ignoring any mention of the earlier action involving the military column. Ukraine and the E.U. have fretted for days that the convoy could be used as a pretext for a military intervention by Russia.

Meeting in Brussels Friday, E.U. Foreign Ministers warned that: “any unilateral military actions on the part of the Russian Federation in Ukraine under any pretext, including humanitarian, will be considered by the European Union as a blatant violation of international law.”

The need to avert a humanitarian crisis in Luhansk, currently under siege from Ukrainian forces, is not in doubt. It is unclear how many of the city’s pre-war population of 450,000 are still in the city, but they have been without water and electricity supplies for nearly two weeks now.