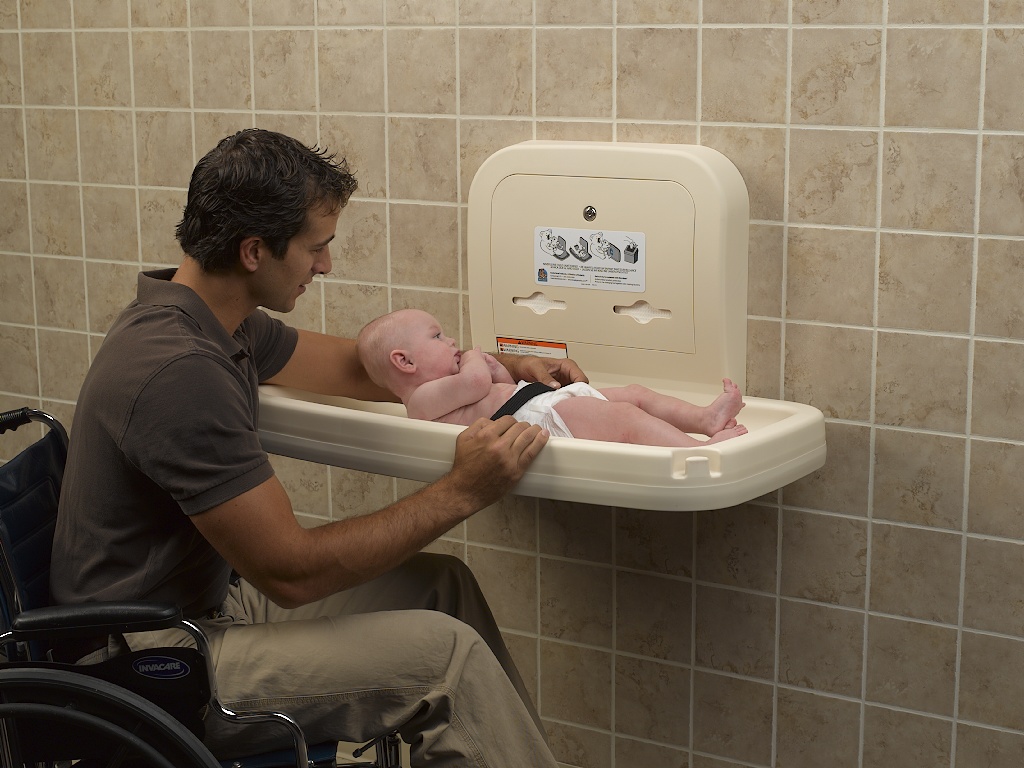 The cover piece this past week in The Onion’s fake Sunday magazine, the Weekender, was all about the stranglehold that Koala Kare has on the market for diaper-changing stations in public restrooms. “Can Anyone Challenge Koala for Baby Changing Station Dominance?” the headline asked.

As always with the Weekender, there was no actual article, just the cover. So we thought we’d provide the article. The answer is that, yes, someone can challenge Koala, and some do, but only on the margins. Koala invented the market for diaper stations in the 1980s, and it does in fact dominate that market. Overwhelmingly.

“Koala is the Kleenex of baby-changing stations,” says Jerry Beaver, a part owner of Babystations.com, which sells the items. “People just call baby-changing stations ‘Koalas.'” But Koala is far more dominant in its market than Kleenex is in the tissue market. Beaver says that about 95% of the changing stations sold on his site are made by Koala. Other distributors give somewhat lower numbers, but none give a number below 80%.

The man now in charge of Koala, Brendan Cherry, won’t give market-share figures (or any other figures, such as sales), but he says Koala competes with about six or eight other firms. All of them, though, produce changing stations as a sideline to their other businesses. Foundations, a company based in Medina, Ohio, makes changing stations as part of its line of child-oriented products for institutions such as hotels and child-care centers. Its main business seems to be cribs (nobody from Foundations could be reached for comment). Newell Rubbermaid makes changing stations, too, but as Cherry put it, “It’s a good brand, but they’re not in the diaper-changing business, they’re in the plastic-molding business.” Newell Rubbermaid’s changing station is just one of hundreds of products including pens, wastebaskets, and ice trays.

Up until the mid-’80s, it was exceedingly difficult for parents (at the time, that mostly meant mothers) to find a good place to change a diaper. In that parental distress, Jeff Hilger, then a medical-device salesman near Minneapolis, saw opportunity. He and a couple of friends decided that the best solution was a fold-out device that could be mounted to a wall.

With that idea and $15,000 in capital, Hilger and his tiny company, then called JBJ Industries, changed the public restroom forever. And in so doing, they also changed American shopping and dining habits. No longer did parents have to beg off an evening out because of the effective impossibility of toting their babies along. The diaper-changing station was a response to the increasing number of dual-income households, and working parents’ increasing desire to be with their kids as much as possible.

Now 68 and something of a racehorse mogul in Minnesota, Hilger hesitates before finally allowing: “Well, yes. We changed the public restroom. We got the babies off the floor.”

He means that literally. When he first started marketing the product to restaurants and retailers, he passed out brochures depicting a family posing with a baby in the arms of its mother. That went nowhere. Business owners just couldn’t see the use case for changing stations. Hilger says he was trying to sell the device to “men in their 50s who never changed a diaper in their life.”

A new brochure — this one depicting a woman on her hands and knees changing her baby’s diaper on a disgusting bathroom floor– did the trick. “We had to make them feel guilty,” Hilger says.

Customers piled in. “McDonald’s called me right away,” Hilger says. In short order came Target (TGT), Burger King (BKH), and a host of other similarly large chains. “We were making millions of dollars, at a company with only nine people,” Hilger says.

After that, the product — called the Koala Bear Kare Baby Changing Station — more or less sold itself. For a paltry amount of money, business owners could vastly improve their customers’ shopping experiences. The changing station has since become a must-have for any business where a baby-toting parent might be a customer.

In 1991, JBJ added a new product: a baby protection seat, to store babies while parents used restroom facilities. In 1993, the company changed its name to Koala Corporation. It went public soon after. Hilger retired in 1996, and Koala went on to make a series of unwise acquisitions. The company was delisted from the Nasdaq in 2003. The baby-station business was sold to Bobrick Washroom Equipment in 2004.

That sale might have saved the brand. Bobrick, the company that introduced the first patented soap dispenser about a century ago, has kept the Koala business basically independent, and has kept the company’s focus on making life easier for parents in public spaces. It sells booster seats, high-chairs, and similar products.

There is still plenty of room for growth, says Cherry, who is a Bobrick vice president and general manager of the Koala subsidiary. In facilities where the women’s restroom has a changing station, the men’s room often doesn’t (there is actually a proposed law before the California legislature to address this problem.) The private company’s growth remains “robust,” Cherry says. What once “was a luxury has now become an expected fixture.”