Russia-Iran trade pact: Great for fear-mongering, not much else 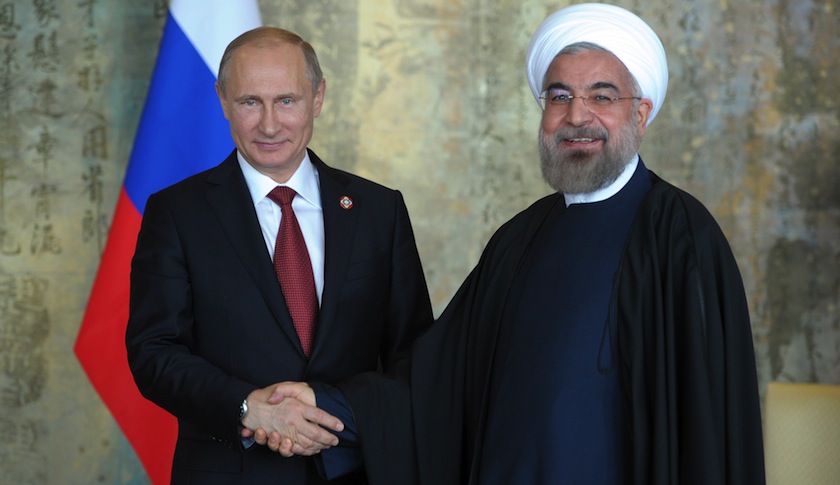 Washington shouldn’t be overly concerned with Russia and Iran forming some sort of sanctions-busting economic trade pact. While a pact between the two countries may make sense politically as they both face economic sanctions from the West, the two sides truly have little in economic benefit to offer each other.

The Russian government surprised the markets on Tuesday when it announced what appeared to be a landmark economic trade pact with Iran. The multi-billion dollar deal was described as an “oil-for-goods” program in which millions of barrels of Iranian crude would be swapped for a variety of Russian goods and services. Russian Energy Minister Alexander Novak told reporters that the country would “participate in arranging shipments of [Iranian] crude oil, including to the Russian market.”

The news confirmed fears in Washington of the formation of an axis between Tehran and Moscow specifically designed to sidestep the Western sanctions targeting both countries. The fears subsided later in the day when the Russian government pulled the statement, giving no explanation. So, was there ever a deal?

Such is the folly that is Russian diplomacy these days. The Russians did reissue a statement on the pact, but it was lacking in any concrete detail regarding the oil swap. The three-paragraph statement said that the two sides had agreed to a “memorandum of understanding” in which the two “envisages the expansion of trade in several areas.” The oil and gas industry was mentioned alongside others such as construction, the development of grid infrastructure, as well as the supply of machinery, equipment, consumer goods, and agricultural products. That’s it. There was no mention of timing or possible volumes of oil to be traded.

Earlier in the year, Russian and Iranian state-owned media announced that the two sides were negotiating a pact that could see as much as 500,000 barrels a day of Iranian crude swapped to Russia. This concerned the White House as it would help Iran increase its export power significantly. Iran has the ability to export around 2.5 million to 3 million barrels of crude a day but, due to sanctions imposed by the West two years ago, the country is only able to export around 1 million to 1.5 million barrels a day.

Such an agreement would devastate the West’s efforts to curtail Iran’s nuclear ambitions through economic sanctions. At the same time, with the oil money cycling through the Russian economy, it would also undermine sanctions recently levied against Russia over its illegal incursions into Ukraine.

But while such a political agreement makes sense on paper, the reality is a bit more nuanced. Russian and Iranian trade is low at around $5 billion a year because neither country exports anything that the other wants. For starters, the last thing Russia needs is more oil. After all, it is the world’s second largest exporter of the stuff—pushing out around 5 million barrels a day or so. Since it is such a prolific exporter, Russia lacks the basic infrastructure to import foreign oil. There are no oil pipelines that link Iran and Russia, meaning that everything would need to go by ship. But since Russia lacks coastal refineries, it would not be able to receive or process any of the crude. Furthermore, its pipeline network is designed to pump oil out of the country, not back into it. This lack of takeaway capacity would make it difficult to move the oil around Russia.

It is difficult for Russia to import Iranian crude, but what about reselling it? That seems difficult as well. Even though Russia might buy oil from Iran, it would still be considered Iranian crude. That means Russia would face the same export restrictions Iran does in a sale. This would prevent it from marketing the oil to the European Union, Russia’s largest energy customer. Meanwhile, countries like China and Korea, which import large amounts of Iranian crude, have put a cap on imports. If Russia sells the oil to them, then Iran is stuck with more crude, evaporating the whole point of the swap.

What can Russia offer Iran? Well, around 70% to 80% of Russian exports is, you guessed it, energy, which, Iran doesn’t need. Reports mention that Russia could assist in upgrading Iran’s power grid and electrifying its rail network. That’s ironic, given the sorry state of Russia’s power grid and rail network, where blackouts and power surges are common. This past April, thousands of people in Russia’s far east went without power for days due to a “breakdown” at a local power plant. Meanwhile, a power surge is thought to have caused a derailment of a Moscow subway train last month that killed 23 people and injured scores of others.

Russia also mentioned beefing up agricultural exports to Iran, but that might be hard following Putin’s decree yesterday banning the importation of all agricultural products from the West. Russia will now have to make up for that shortfall in food by both increasing imports from neutral countries, like Brazil and Turkey, and by increasing its own domestic production, which isn’t an easy job given that winter is coming. In any case, that means Russia is more likely to import food from Iran, not export it.

The Russians also mentioned it could export consumer and manufacturing goods as payment for the oil. Unfortunately, though, Russia doesn’t really make a lot of consumer goods worthy of exportation. Russians themselves prefer goods from abroad and typically shun domestic goods due to their notoriously poor quality. It is doubtful that Iranians would line up to test drive the latest model Lada automobile or rip into a bag of shashlyk-flavored potato chips. The one consumer good Russia can make well is vodka but, alas, alcohol is banned in Iran.

Russia does produce one thing that may be of interest to Iran: weapons. Russia is the world’s second-largest weapons exporter, behind the U.S., so it actually has a lot to offer the Islamic Republic. Unfortunately, Russia is an unreliable supplier. Iran is still waiting for delivery of five S-300 advanced missile defense systems it says it purchased from Russia in 2007. Russia says it can’t deliver the weapons because it is banned from doing so due to, get this, UN sanctions. Iran has filed a $4 billion complaint with the International Court of Arbitration in Geneva to get its missiles. Until that case is resolved, it seems highly unlikely that Iran would want to engage in another multi-billion dollar arms deal with Russia in the near future.

A potential alliance between Iran and Russia has worried the West for centuries. But cultural, political, and economic ties have kept these two great powers at a distance. While the two do have a common enemy in the West, it isn’t enough to make them bosom buddies. Trade may indeed pick up between the two, but it won’t be much of a replacement for the markets these nations will leave behind.