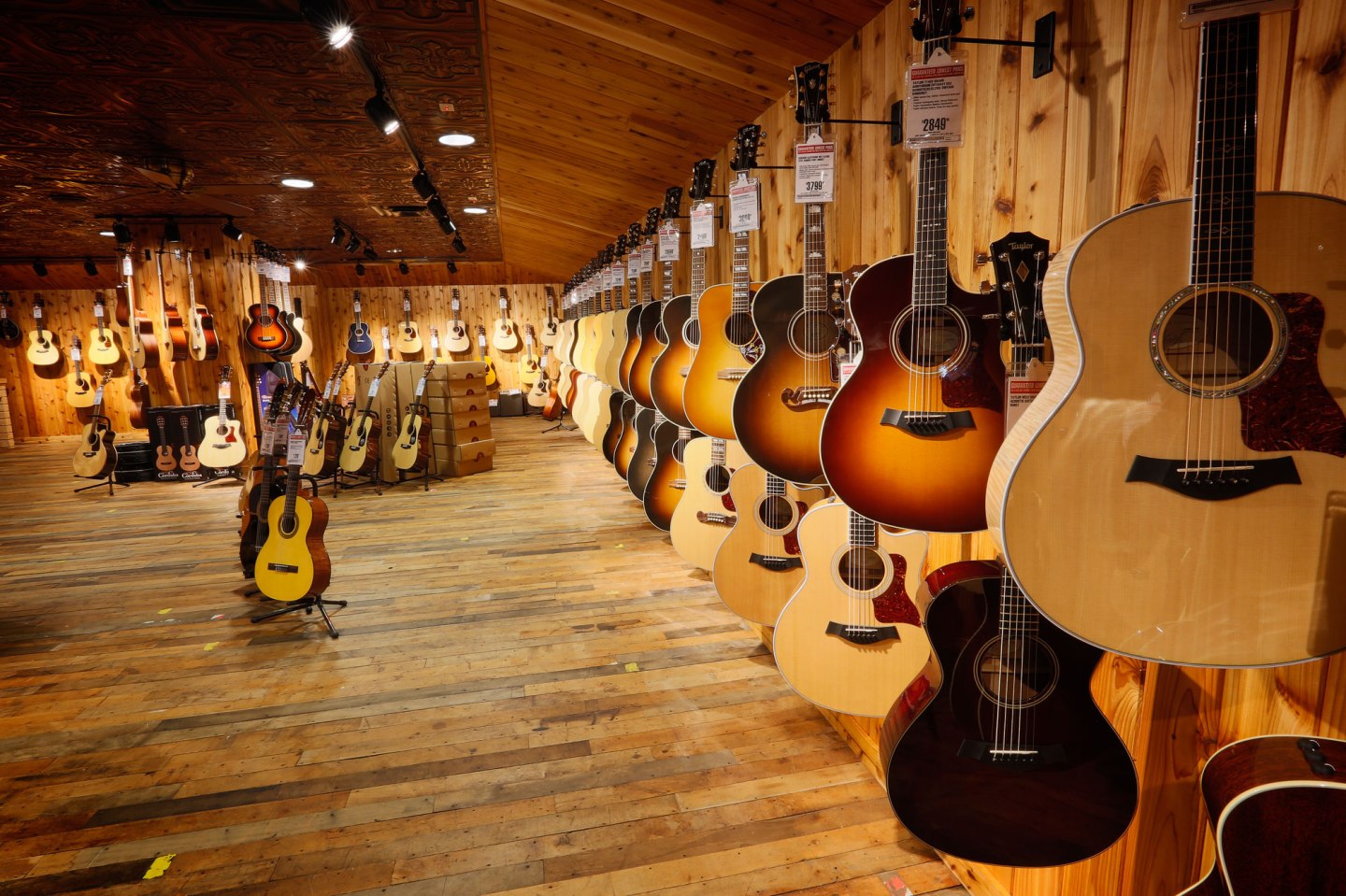 Guitar Center is the rare retailer to be betting heavily on brick-and-mortar for its future.

At a time when overall music instrument sales have stalled and web sites like Amazon.com (AMZN) , eBay (EBAY) and Craigslist are selling more and more music gear, Guitar Center is doubling down on its physical presence, with plans to open between 15 and 20 stores a year for the foreseeable future on top of its current fleet of 262 locations. (It had 210 stores back in 2007.)

One such new store is the mega-store Guitar Center opened Thursday in New York’s Times Square.

The 28,000-square-foot location is indicative of how the privately held company has been radically re-thinking its retail approach. The flagship, about the size of an average Barnes & Noble, will have 9 recording studios, offer extensive music lessons and instrumental rental programs, and boast a snazzy Platinum Club area to showcase its most expensive guitars. And this being Times Square, with the requisite need to dazzle, the Guitar Center flagship will permanently house Eric Clapton’s favorite Fender Stratocaster, “Blackie” which the chain bought for $959,500 in 2004, an auction record that still stands.

While the Times Square store is much larger than a typical Guitar Center, more and more locations of any size in the fleet will offer the same services: currently 80 stores have training spaces, something Guitar Center wants at all stores by 2017. Some 55 locations have recording studios now, and that number will hit 85 by year-end. Meanwhile the company, which sells all manner of items like drums, recording software and sheet music, in addition to guitars and amps, is ramping up rental programs at more stores.

So the idea is for Guitar Center to make its physical stores a more appealing destination that serves more customer needs with high-margin services that Amazon, and for that matter, small independent stores, can’t offer. This will reduce its dependence on instrument sales and, it hopes, raises its profitability– the return on investment for studio space has been 20%, for example.

In addition to the store expansion — the company has already scouted 150 potential store locations — the company wants to retrofit about 207 stores so they are configured to also offer these services.

“We really want to bring these new services to the existing stores—we have great stores that do a lot of business but really do it with a tired format,” Chief Financial Officer Tim Martin said at a media event in New York.

Guitar Center is by far the dominant U.S. specialized musical instrument retailer, with 2013 sales of about $2.2 billion, or five times more than its closest rival, Sam Ash Music, and a 32% share of the market, according to data from Music Trades, an industry publication. But while Guitar Center is targeting annual sales of $3 billion by 2020, its business, like that of the overall industry, has yet to fully recover from the 2008-09 financial meltdown. And that is despite help from the disappearance of countless independent stores and the decision by mass retailers Wal-Mart Stores (WMT) and Target (TGT) to drastically scale back their instrument assortment since then.

The company’s expansion and remodeling plans are expensive and until April, it didn’t really have the money for it as it dealt with the heavy debt burden leftover from the $2.1 billion leveraged buyout by Bain Capital in 2007. That changed when private equity firm Ares Management took a 60% stake in Guitar Center in a deal that converted some its debt in the retailer into equity. Bain Capital still owns a stake in the retailer. Following the Ares deal, Guitar Center’s debt fell to $1.1 billion from $1.6 billion, and its annual interest expense fell $70 million, freeing up a lot of the cash it needed.

Guitar Center’s focus on its stores might seem out of step with prevailing conventional wisdom and current practices: growth in store counts at the 100 largest U.S. retailers by revenue has slowed to less than 3% from more than 12% three years ago, according to new data from Moody’s. And more and more people are buying instruments online—according to a National Association of Music Merchants report, at any given time, there are 1 million instruments for sale on Craigslist. What’s more, according to Music Trades, seven of the 10 fastest-growing musical instrument retailers in 2013 were internet stores.

“They are locked in a mortal combat with Amazon,” Brian Majeski, editor of Music Trade magazine, told Fortune. (Guitar Center gets about 20% of sales online thanks in part to its ownership of the Musiciansfriend e-commerce site.)

Yet, like many retailers, from Macy’s (uses its stores to fill online orders) and PetSmart (many stores offer kennel services), Guitar Center seems to have discovered that physical stores are perhaps its best means of self defense. In its current retail expansion, Guitar Center will try a new tack: new stores will generally be smaller, ranging from 7,000-11,000 square-feet as opposed to the more traditional 15,000 square feet, and most new openings will be in smaller, underserved markets. And consolidation stemming from the continued disappearance of independent stores, which typically don’t have Guitar Center’s clout with vendors to negotiate better prices, will help Guitar Center. About one-third of the company’s capital budget will go to better integrating its online business and its stores.

While the company’s fortunes seem to be turning, with four straight quarters of comparable sales growth, the fact remains overall music instrument sales are barely growing, making it unlikely they’ll return to the $8 billion or so mark they hit in 2005 anytime soon. What’s more, guitar shipments fell 0.7% last year with only higher prices saving the day for retailers. But turning a guitar store into a full-service business is the prescription Guitar Center is betting on to save the day and make an eventual IPO within five years a possibility, with the full backing of its new owners, Ares.

“They want to know how can we build the stores faster, how can we retrofit them faster. They’re pushing me for faster, not slower,” Martin said of Ares.