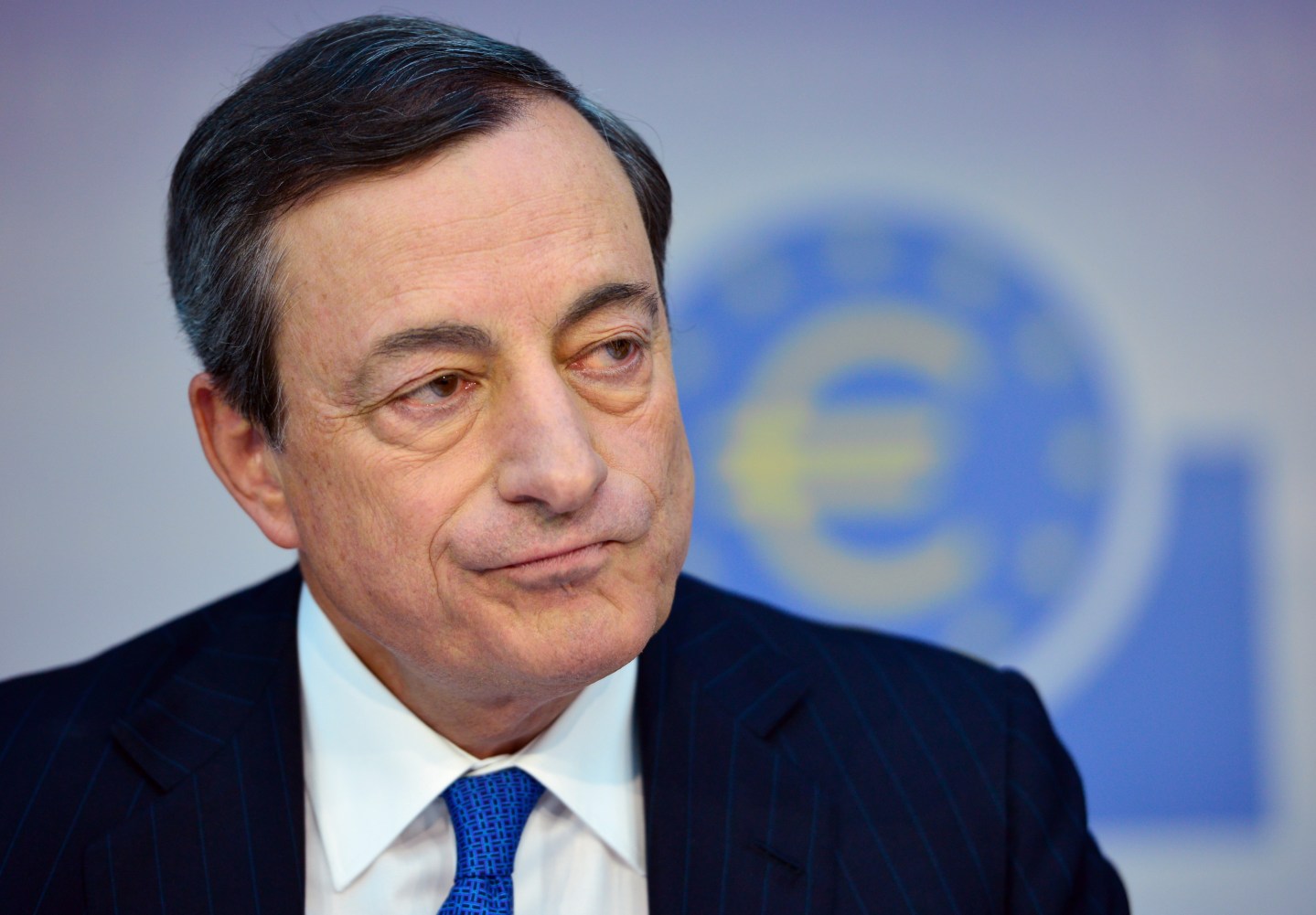 FRANKFURT AM MAIN, GERMANY - JUNE 05: Mario Draghi, president of the European Central Bank (ECB), speaks during a news conference at the bank's headquarters on June 5, 2014 in Frankfurt am Main, Germany. The European Central Bank has lowered its benchmark interest rate to 0.15% and has also reduced its deposit rate below zero, to -0.1%. (Photo by Thomas Lohnes/Getty Images)
Thomas Lohnes--Getty Images

European Central Bank President Mario Draghi refused to press the panic button Thursday, saying that proper reform in countries such as Italy and France would help the Eurozone much more than a knee-jerk reaction to slower growth caused by a trade war with Russia.

With the Eurozone economy appearing to stall as the escalating Ukraine crisis ravages business confidence, Draghi at his monthly press conference stuck to the line that the Eurozone has bigger problems to worry about, such as too-high taxation and stifling bureaucracy.

He repeated the ECB would take further steps if developments threatened to push the Eurozone into a deflationary spiral, and acknowledged that “we will have significantly slower growth in the next two quarters” if the geopolitical situation, especially in Ukraine, gets any worse.

But he said it was too early to assess the impact of the sanctions announced by both sides in the last week, and insisted that the steps the ECB took in June would, in time, encourage lending and bring down the euro’s painfully-high exchange rate, giving relief to exporters.

It’s two months since the ECB cut its key refinancing rate to a new record low of 0.15%, but the economy has slowed since then as the crisis in Ukraine has escalated.

Italy said Wednesday it fell back into recession in the second quarter as its economy shrunk by 0.2%. And figures released earlier Thursday showed industrial production in Germany and Spain both fell clearly short of expectations in June. With new orders also falling sharply, the German government has warned that it expects the economy–the only large one in the Eurozone firing on all cylinders–to slow down in the next few months.

Financial markets weren’t particularly impressed by his stoicism, and although the euro briefly touched an 11-month low against the dollar, it soon rebounded to be little changed on the day. By 1140 EDT, it was at $1.3354, compared to $1.3371 before the press conference.

The euro’s high exchange rate has been blamed by a raft of companies from sportswear group Adidas AG (ADDYY) to advertising group Publicis SA and chemicals giant BASF AG for poor profits in the first half of the year, but it has fallen 4.5% against the dollar since March as financial markets anticipate an end to money-printing by the Federal Reserve and possibly higher interest rates within six months.

“The fundamentals for a weaker exchange rate are much better now than they were a couple of months ago,” Draghi said, adding that markets have understood that interest rates are set to rise much earlier in the U.S. and U.K. than in the Eurozone.

The U.S. and U.K. are both far more important trading partners for the Eurozone than Russia, and both economies are growing strongly as years of aggressively easy monetary policy run their course.

The Bank of England is under pressure to raise interest rates to contain inflation, rather than stimulate the economy. House prices rose at over 10% in the year to July, employment is rising sharply and growth is set to hit 3% this year. But, like the ECB, the BoE left its key interest rate unchanged Thursday.

Although no-one expected the BoE to take action this week, some analysts think that the ‘hawks’ on its Monetary Policy Council may have voted for a rate hike for the first time since the financial crisis. Whether that happened will become clear in six weeks’ time when the Bank publishes the meeting’s minutes.

Recent comments have pushed market expectations for the first rate increase up to the fourth quarter of this year, over a year ahead of what the Bank said it intended to do only 12 months ago.