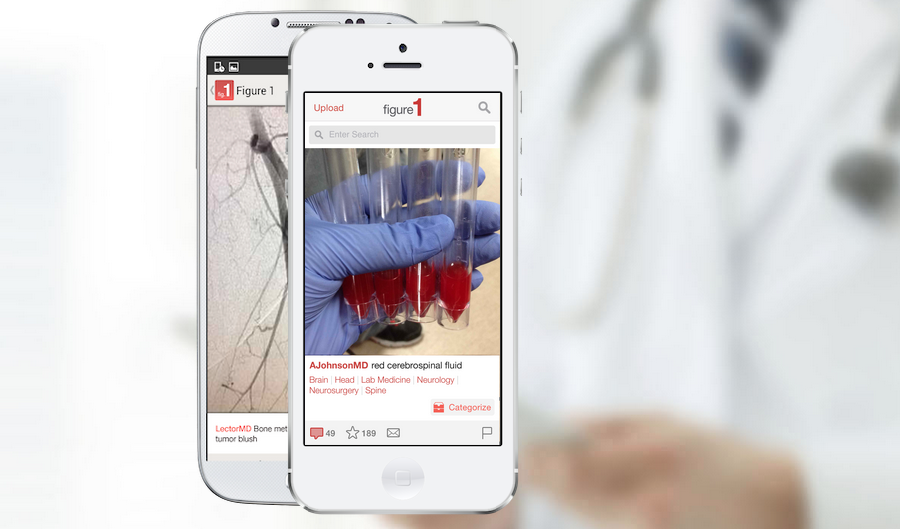 A word of warning: the photographs found on the mobile application Figure 1 may make your stomach turn. They include—and you should skip to the next paragraph if descriptions of medical injuries will nauseate you—a swollen bloody thumb, recently reconstructed after a fireworks injury; a 17 year-old’s foot charred black by an electrical burn; and a worm pulled from a patient’s anus. Yes, really.

This is the stuff that medical professionals don’t see everyday, which is exactly why they’re flocking to this photo-sharing app. Though tiny, it has proven extremely popular since it launched two years ago. The app now counts an audience of 125,000, and its parent company, which shares its name, estimates that 15% of medical students in the United States use it. Which may be one reason why investors are interested: on August 6, the Toronto-based startup will announce that it raised $4 million in funding led by Union Square Ventures.

Figure 1 essentially offers a visual shorthand for healthcare professionals looking to compare notes. In my opening essay for Fortune‘s The Future of the Image series, I made the case for the rise of visual literacy as people increasingly substitute photos for text. This trend will have a huge impact on business. As pictures replace words, tools that allow professionals to take and compare photos have an increasingly important role to play in the enterprise.

Already, a host of software applications are emerging to support this. Architizer invites architects to uplioad and share projects, for example. FoKo offers a secure, private enterprise photo-sharing app designed for companies and counts Whole Foods as a customer.

It’s no surprise that healthcare professionals would embrace an Instagram for doctors. Medicine, after all, is highly visual. Classic textbooks are teeming with diagrammed photos, and for doctors trying to learn about all types of ailments, descriptions are never as good as seeing a malady in all of its splendor.

Joshua Landy, a critical care physician, first saw the potential for a photo-sharing tool while researching online medical education as a visiting scholar at Stanford University in the summer of 2012. In surveys that he distributed, he found doctors were already using their smartphones and other devices to text each other pictures, or to look up medical references. Back in Toronto, he partnered with software developer Richard Penner and former journalist Gregory Levey to launch a platform that allows medical professionals to share photos safely without compromising the privacy of patients.

Anyone can join Figure 1 and “star” photos, which is the equivalent of liking them. Only medical professionals can post photos and make comments. (About a third of the users are doctors, and another third are other types of health care workers.) To comply with HIPAA regulations, users must sign a waiver—an elegantly designed one-click, one-signature process—every time they upload a photo. Figure 1 also blocks faces and obscures other details that may compromise patient privacy.

Many of the images draw diagnostic discussions, though the app isn’t intended for this purpose. The images are user-tagged by anatomy (lower limb, brain) and specialty (cardiology, pediatrics). For example, photographs of a fractured skull with a caption detailing a car accident prompt a conversation about whether the patient was wearing a lap belt (he was) and how often belts break (rarely). An image of a curved portion of a spine accompanies a caption that identifies the patient as a 34-year-old female with gait disturbance and bladder dysfunction and asks for thoughts. Of the seven comments, someone suggests additional x-rays while another commenter asks if it could be a hemangioma, a benign tumor.

Figure 1 will likely have competition as more medical professionals embrace images on the job, and several startups already offer social networking tools for doctors. (One, the physicians’ network Doximity, now boasts more member physicians than the American Medical Association.) But its founders have clearly identified a trend that is sure to gain momentum.