Q&A: An African leader on why the continent could be the next great growth story 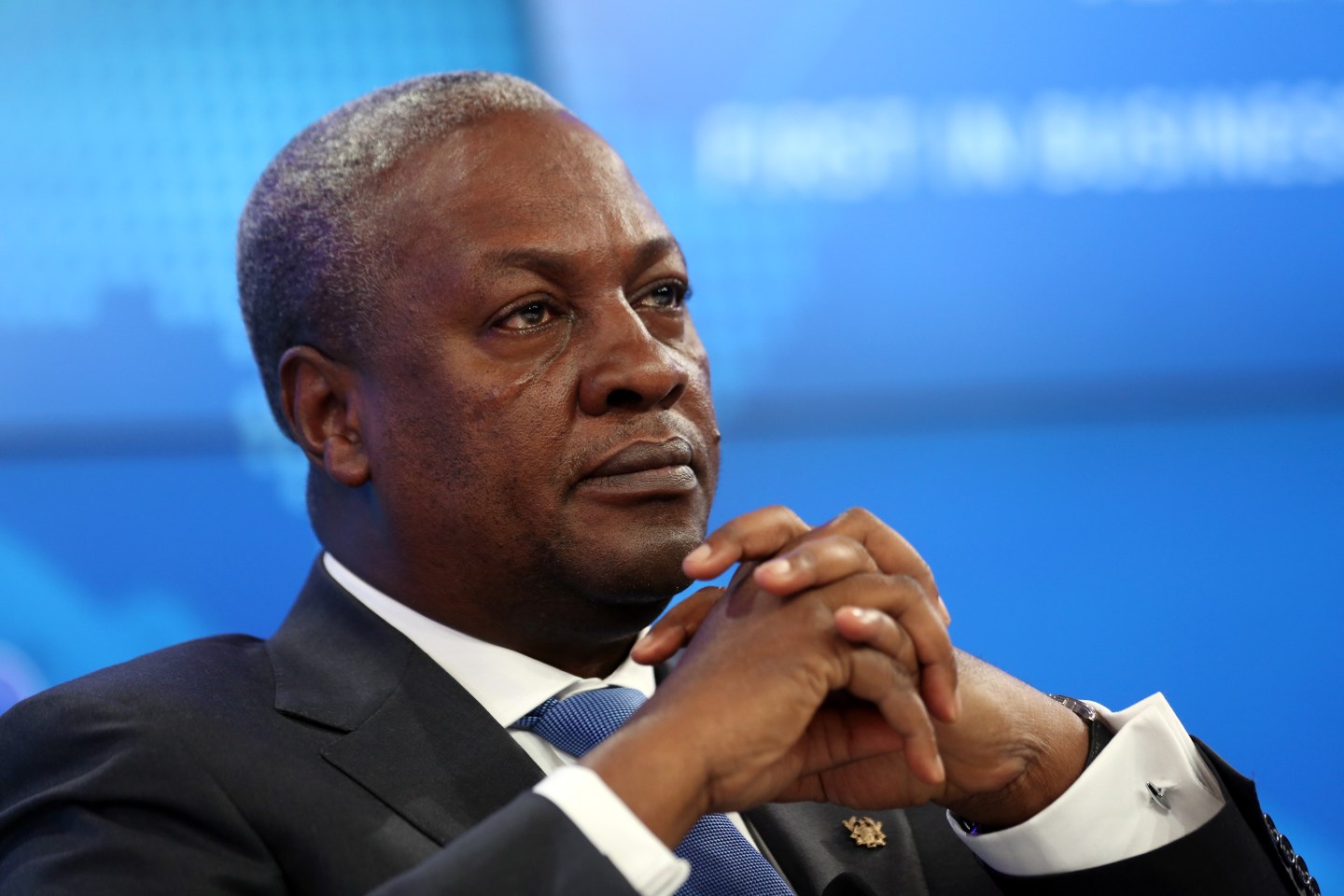 More than 40 African heads of state are convening in Washington today for a three-day White House leaders’ summit about the continent—the first one ever. It’s been a long time coming. China and the European Union have both hosted top-level Africa confabs for years, angling to lock up lucrative contracts and cement their relationships in markets where the average growth rate is about 6%. U.S. investment and know-how is sorely needed.

Nowhere is that true more than in Ghana, which Barack Obama made his first African stop as president in 2009. The country has been hit hard economically, with a high fiscal deficit and oversized public sector. Fortune‘s Vivienne Walt recently sat down with Ghana’s president John Dramani Mahama in his vast office. Atop Flagstaff House, the executive building, with its bird’s eye view of the capital Accra, Mahama offered a preview of the issues that will be discussed at the summit and outlined what Africa needs to prosper.

Fortune: When Obama made his big Africa speech to Ghana’s parliament in 2009 he said this country was the “Africa that is too often overlooked,” democratic and peaceful. And yet it didn’t follow with American investment jumping in. So how do you change the perception among Americans that Africa is just too risky and unstable to invest in?

Mahama: A lot of the misperception in the West is that Africa is one monolithic country. Most people don’t realize it’s made up of 54 sovereign nations. So if you hear there’s a war in Central African Republic it means all of Africa is aflame. We keep trying to influence the reporting on Africa, to change the narrative to the perspective of Africans. Europe has been engaged in Africa for a long time. Recently a lot of Chinese, Malaysians, etc., are pumping in money, setting up industries here. Most of the investments from America are in the form of oil and gas. Those are areas where America has a comparative advantage, so we’re seeing those investments from the U.S.

Fortune: What’s your pitch to American companies about why they should invest in Africa?

Mahama: Money. What’s business about if not about making a profit? Africa currently has the highest rate of return on investment in the world. So that in itself is an attraction to business. Africa has the fastest growing middle class in the world and disposable incomes are increasing, There’s demand for housing, demand for lifestyle products. I believe those who have invested will be our best ambassadors—not only for Ghana, there are several other countries doing as well as Ghana. If people can overcome their wrong perceptions about Africa and put their money here I think they will find they have made a very good decision.

Fortune: It seems what you really need is people to come in here and build factories. And you have launched a new “Made in Ghana” initiative. Is this the next wave of investment here?

Mahama: We have a fast growing youthful population and we need to begin creating jobs to avoid social tensions. We’ve seen the Arab spring. African leaders need to respond quickly to avoid getting caught in some sort of social explosion as a result of youth bulge that does not have meaningful employment. Some of the processing that is done outside the continent we must bring back home. Ghana is the second-leading exporter of cocoa beans in the world. We must bring the secondary and tertiary processing back to Ghana. We are one of the top 10 gold exporters in the world, yet we export it in raw form. We must produce sugar: We’re importing $270 million worth of sugar a year. There are so many things: Poultry, fish products, soya beans.

Mahama: There’s a link between all of this, as you say. One big issue about producing things ourselves if that once the farmer produces it how does he get it to market? It’s difficult. It increases the unit cost of food. I just visited a poultry facility. The farmer produces thousands of eggs a day and the road is so bad that by the time the trucks have taken the eggs to the market he has breakages. So he has a problem.

Mahama: Hah, yes! I’m just giving you one example. It’s not just good roads, but also bridges, railway lines, power, water, irrigation. Energy is becoming the most critical constraint to Africa’s economic growth: The lack of adequate power. That is one sector we have prioritized. We have set a target to improve installed power to 5,000 megawatts by 2016. Currently we are just under 3,000 megawatts. The Ghana natural-gas processing plant should be finished this year, and if that’s finished we can fee up to 150 million cubic feet of gas a day. Beaching our own gas and being able to distribute it is critical to stabilizing power supply. We have an agreement with the U.S., which I’m hoping President Obama and I can initial at the U.S. African leaders summit.

Fortune: How important is this summit in Washington in August? The U.S. has been glaring in its absence in hosting Africa summits.

Mahama: Yes, we’ve had them with Japan, China, India, several countries. So it’s a good signal that there appears to be a new interest and engagement. We felt a strong collaboration during President Clinton’s time when he pushed through AGOA [Africa Growth and Opportunities Act in 2000, which opened U.S. markets to African producers]. We also had a strong feeling of cooperation under President Bush. Ghana is one of the countries that benefited from the compact [U.S. investment agreements with African governments, under the U.S. agency Millennium Challenge Corporation, which Bush introduced in 2004], and now we’re moving on to a second compact.

Fortune: I remember being in Africa right after Obama’s election in 2008, and there was this huge expectation with Obama being half-Africa, that there was going to be much bigger involvement. But it didn’t turn out that way.

Mahama: No, it didn’t turn out that way. We don’t hold that against him. I think President Obama in his first term had been quite preoccupied with fixing the U.S. economy and the fight against terrorism. But in his second term he’s reengaging with Africa and this summit in Washington will refocus some U.S. attention on Africa. I think it’s a good thing for our relations.

Fortune: Ghana’s economy is in bad shape and your currency has sunk against the dollar this year. How confident are you about turning it around and how long is it going to take?

Mahama: It takes multiple years to deal with the deficit. Our deficit rose from 2012 as a result of transition to a new wage system, which led to wage overrun and pressure on the budgets. And then it rose as a result of lack of fast action to reduce subsidies on petroleum. So by 2013 we were running a deficit at almost 12%. We’ve clawed back on subsidies on petroleum products, and on utilities. We’ve moderating wages and compensation rewards. So gradually we’re beginning to see wage pressures come down from as high as 76% of tax revenues it came down to 65% and currently it is at 57%.

Fortune: So much of investment is about perceptions, and when you ask Americans about Africa, they say ‘corruption.’

Mahama: It’s an enduring misperception: That if one place is corrupt the whole of Africa is corrupt. The problem is fixing institutions to prevent corruption. In Africa we’re still building and strengthening institutions. We are implementing a whistleblower’s bill. We’ve authorized the Attorney General to sanction anyone found to misappropriate government finances. It’s a battle we need to fight on an everyday basis.