How to keep America’s roads and bridges from crumbling 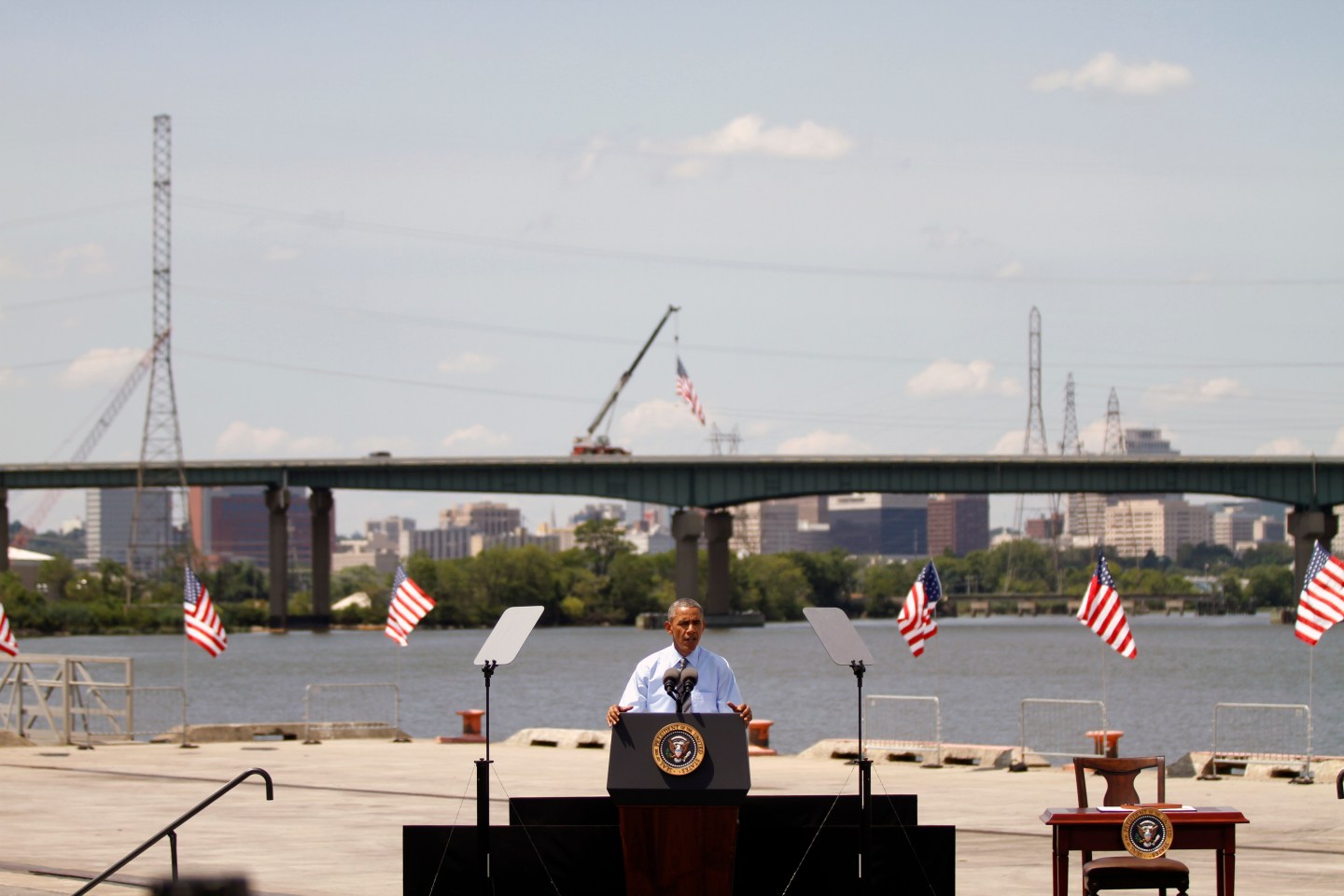 U.S. President Barack Obama on July 17, 2014 announces new national infrastructure initiative at the Port of Wilmington, Delaware, in front of the I-495 Bridge, which is undergoing substantial structural repairs.
Jessica Kourkounis — Getty Images

Many have long said that America hasn’t invested enough in its bridges, roads and other infrastructure. Last week, President Obama took steps to ramp up investments with new initiatives to encourage the private sector to invest in the nation’s infrastructure. This includes filling in the ‘knowledge gap,’ or the expertise that state and local policymakers need to channel such investments in a way that protects taxpayers and still provides sufficient returns to investors. While not a silver bullet, the launch of Obama’s new Transportation Investment Center is a big step in the right direction, as it’s essentially a one-stop shop at the Department of Transportation that connects state and local officials with tools to support private financing for infrastructure projects.

A generation of U.S. roads, bridges, water and sewer pipes built half a century ago is nearing the end of its useful life, but public budgets are too strained to foot the bills to repair and upgrade them. At the same time, private investors from the United States and around the world are desperate to invest in infrastructure projects that provide stable, long-term returns.

Well-designed and executed infrastructure financing using private capital, such as Public Private Partnerships (PPPs), can benefit both government and investors. Projects in Canada, Europe and Australia have shown that compared with purely publicly-run projects, projects coordinated between the public and private sectors have a better track record in being completed on time and under budget. Politically, support for more private dollars for infrastructure is bipartisan and strong. Catalyzing that private investment to fund U.S. infrastructure ought to be a no-brainer.

Yet in the U.S., too few of these projects get off the ground. We have not yet embraced the idea of private dollars going into public projects and have grown accustomed to funding most of our infrastructure through the municipal bond market. Municipal debt is a cheap source of funding that works well for many projects, but for the right project, partnerships between the public and private sectors may prove the best value for taxpayers.

The art is knowing how to measure that value. Using private capital can be complicated and requires a good understanding from the outset of who bears what risks and who receives what benefits. Decisions often boil down to the experience and comfort levels of local and state officials who make the lion’s share of decisions on which projects move forward and how they are funded. However, many states lack the necessary skills and experience to measure what benefits taxpayers best.

One way to make it easier is to create a place to bring best practices and hands-on technical expertise to local and state decisions makers. Obama’s Build America Transportation Investment Center is one solution; it won’t cost much and the government – U.S. Treasury, in particular –already does this successfully overseas. The knowledge gaps that might exist in Montana and Mississippi are not dissimilar to knowledge gaps in Costa Rica or Canada.

In Costa Rica – and elsewhere around the globe – it is the Infrastructure Finance Unit of the U.S. Treasury’s Office of Technical Assistance (OTA) that provides hands-on technical and managerial assistance across virtually all phases of infrastructure development, from project feasibility and design to risk assessment, financial structuring, tendering, fiscal oversight and managing long-term contracts. They help countries analyze which projects would work best for them financially and whether they can manage debts they would take on; they also help countries attract project investors.

Other countries, particularly Canada, have seen success come from their own public-private partnership knowledge center, PPP Canada. Over the past five years the number of Canada’s infrastructure projects has surged. Similarly, the UK has its own “Infrastructure UK” unit operating within the UK Treasury, which supports private investment in British infrastructure.

Until now, the U.S. has remained on the sidelines in providing the same deep level of hands-on technical support for local and state-led public-private partnerships. The new Transportation Investment Center will replicate much of what OTA does, providing technical assistance, best practices and support for accessing credit programs. As currently proposed this center can be established quickly, require minimal funding and benefit taxpayers virtually immediately. As a central repository for expertise, it will need to coordinate closely with other agencies involved in a broad cross-section of infrastructure, especially the Treasury Department, and certainly beyond transportation to include other types of infrastructure like water and energy.

With a projected $3.6 trillion in U.S. infrastructure investment needed by 2020, and with billions of dollars waiting on the sidelines, linking the two should be easier. If the Transportation Investment Center is a success, it could serve as a magnet for private investment for much needed infrastructure right here at home.

Heidi Crebo-Rediker previously served as the State Department’s Chief Economist and is currently a Senior Fellow at the Council on Foreign Relations.