‘Customer success’ software is getting hot 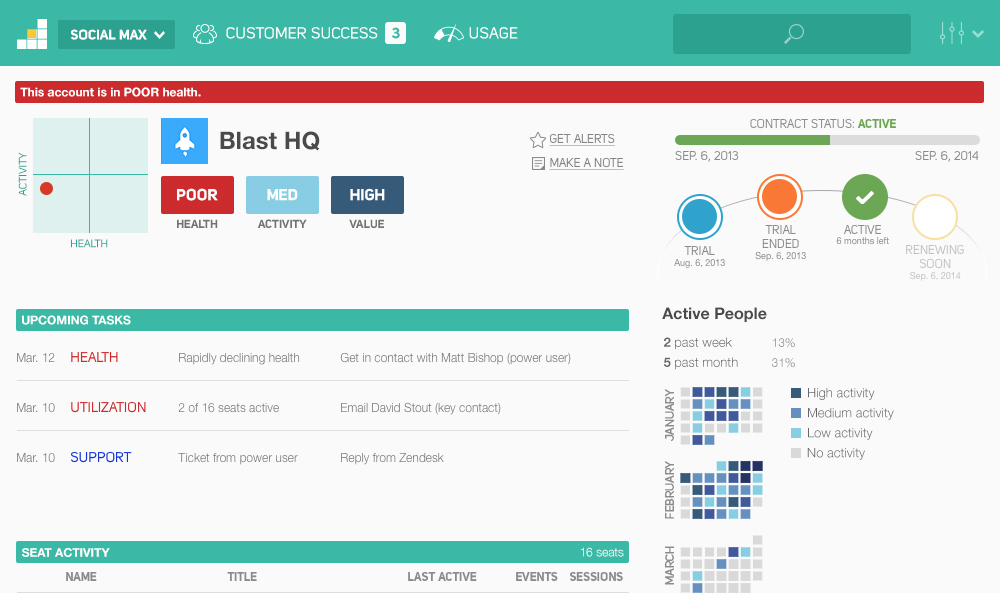 In an op-ed for the Wall Street Journal last year, the prominent investor Marc Andreessen pointed out what has become common wisdom in Silicon Valley: thanks to software, it no longer costs tens of thousands of dollars to build a company.

Preact, a small company based in San Francisco, hopes that lesson applies to customer retention, too.

The startup believes that businesses shouldn’t be spending fistfuls of money acquiring new customers, which is expensive. Rather, businesses should spend comparably less money keeping their existing customers happy.

Two years ago, the company decided to automate this process and base it in the cloud. With a blend of behavioral science, machine learning, and big data analytics, the company says it can predict whether customers will churn, renew, or upgrade based on their past behavior. (“Don’t react,” the company insists. “Preact.”) When a client stops using a piece of software, the business behind it will be notified. And when a power user logs a support ticket, that action is given additional attention. (Preact’s software integrates with Gmail, Salesforce, Zendesk, and Marketo.)

Preact is part of a category called “customer success” software that seems to get more crowded with each passing month. Gainsight is arguably the leading firm; predictive services like Bluenose and Totango are also vying for a piece of the action. There’s nothing inherently new about using detailed analysis of past behavior to predict future performance, but the difference today is that the process can be automated and monitored across a global business.

Michael Geller, Preact’s chief executive, compares Preact’s automation to a Nest thermostat. “Literally, you just set it, and it learns the patterns of behavior in your house,” he says. “It even has a sensor to detect if people are there or not there.”

Though there is buzz around the category, it’s still quite young. Last year, Gainsight hosted in San Francisco the first annual Pulse Conference, at which about 300 people showed up to discuss the growing customer success space. This year’s conference drew 900 people and keynote speaker Malcolm Gladwell.

The conference is an attempt, in part, to define the space, says Anthony Kennada, Gainsight’s head of marketing. When Gainsight started out, “We couldn’t even get people to say ‘customer success,’ Kennada says. “People were marginalizing us as billing solution.”

That’s changing. Some experts say that customer success is the next big thing for the enterprise as well as small- and medium-sized businesses. “It takes about two to three years running a business to truly understand customer success—and see how big its impact is,” says Jason Lemkin, a partner at the early-stage enterprise venture capital fund Storm Ventures.

In the first two years of operation, Lemkin says, most companies have too little revenue and too small of a customer base to accurately predict behavior. “But by about year two and a half,” he explains, “You begin to see a pattern in the revenues. You see referrals and word-of-mouth showing up more and more often as the source of your largest customers. And by year three, you finally have a large enough established base that you can systematically grow it.”

That’s where customer success companies enter the picture. Preact co-founder and chief product officer Christopher Gooley explains that many founders and CEOs have learned the costs of customer retention the hard way. “Companies are not just trying to support and sustain but accelerate growth,” he says. With customer success software, “we don’t try to forecast. We identify users who are very likely to upgrade if you influence them somehow.”

RJMetrics has used Preact for about a year. “Before Preact, our account managers had to spend a lot of time investigating each of their accounts to find out how they had been engaging with our product and team,” explains Jake Stein, co-founder and COO of RJMetrics. “Preact makes that process 25% more efficient, and more importantly, improves the quality of the information that the account management team sees so they can most effectively target their efforts.”

Investors are hoping to ride the wave of interest in customer success. In March, Gainsight closed $21.4 million in a Series B funding round led by Battery Ventures, Summit Partners, and Bain Capital Ventures. In April, Preact received $4.6 million in Series A financing led by Trinity Ventures.

Customer success will eventually become standard for measure health and activity for each individual user and account, Geller says.

“Every user is a snowflake,” he says. “Every account is different.”