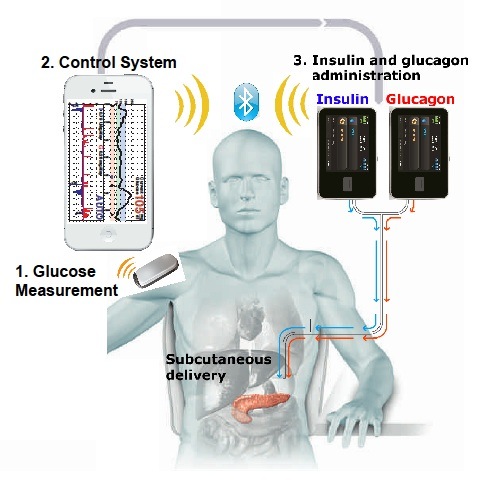 A paper in the prestigious New England Journal of Medicine highlights both the potential benefits of Apple’s newly unveiled HealthKit platform and how far off those benefits might still be.

The report describes an experiment in which 20 adults and 32 adolescents with Type 1 diabetes controlled their insulin levels automatically using a miniature blood sugar monitor, a pair of under-the-skin hormone pumps and an iPhone.

The jerry-rigged device functioned as a bionic pancreas, injecting insulin or glucagon as needed to keep blood sugar levels within a normal range. According to the report, the number of interventions for hypoglycemia among the adolescents was cut in half, from 1.6 per day for a conventional insulin pump to 0.8 a day with the experimental device.

“The data address some of the most difficult problems in diabetes management,” Dr. Kevan Herold, director of the Yale Diabetes Center, told the New York Times. “I’d say that the effects are quite significant and noteworthy.”

The device was developed by Edward R. Damiano, an associate professor of biomechanical engineering at Boston University, whose 15-year-old son has type 1 diabetes. His goal is to begin FDA testing in 2015 and win approval before his son starts college in the fall of 2017.

Type 1 diabetes, a congenital autoimmune disorder, is the rarer form of diabetes. Estimates of the number of Americans living with it range from 25,000 to over 50,000. But systems like Damiano’s might also be used to treat type 2 diabetes. The incidence of type 2 diabetes has climbed sharply with the rise of obesity and is now estimated to exceed 17 million in the U.S. alone.

In Damiano’s device, according to a 2012 article in Diabetes Mine, the iPhone communicates wirelessly with the hormone pumps and sends periodic reports to the iCloud, where the patient data is accessed and managed.

An early version was built using an off-the-shelf iPhone 4.