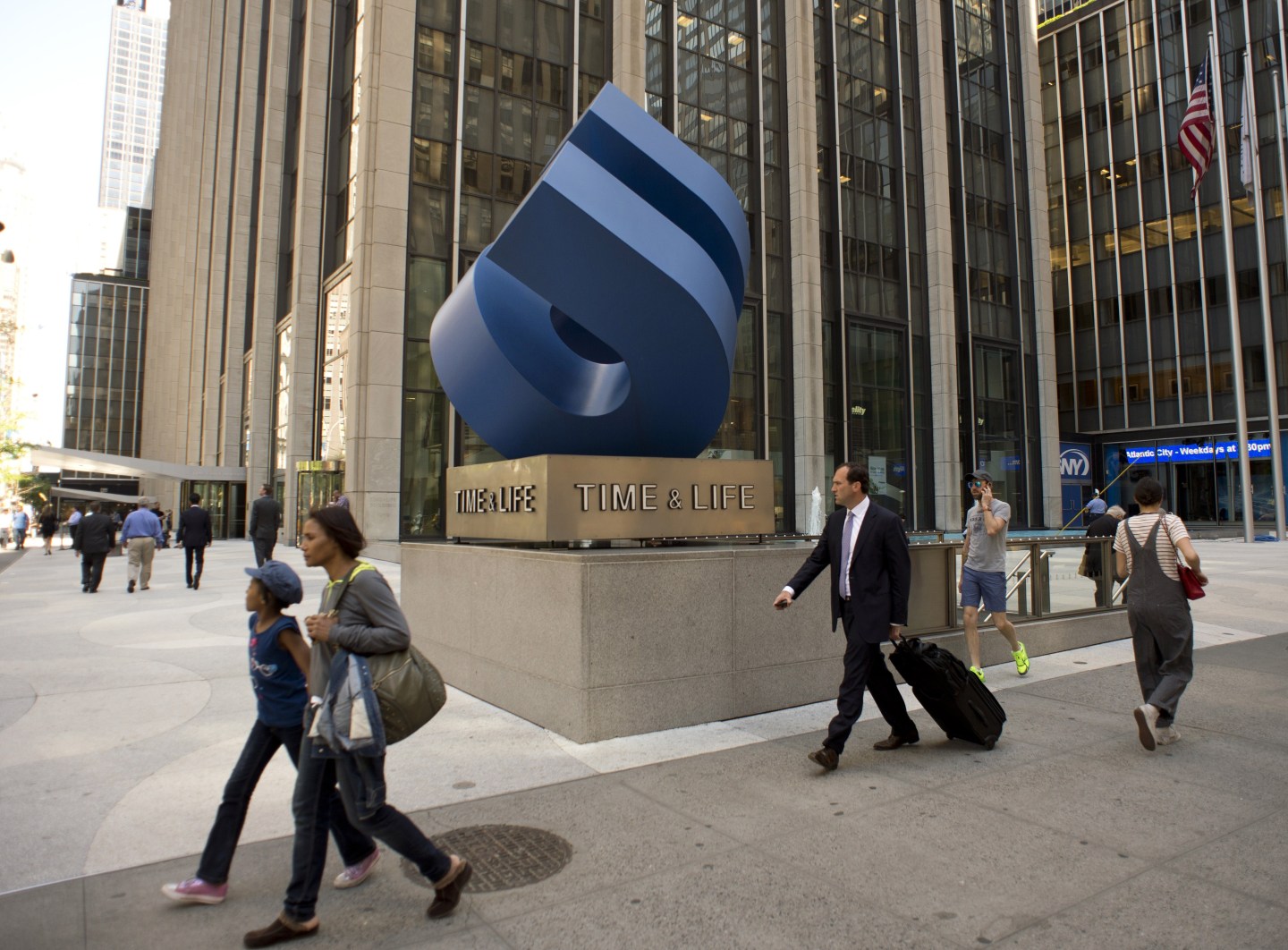 People walk past the Time & Life Building on the Avenue of the Americas June 2, 2014 in New York. Time Inc. is getting a fresh start with its upcoming spinoff as an independent company in a media landscape that will be challenging for the storied magazine publisher. In a symbolic move, the new company will be leaving the Time & Life building in midtown New York, where it has been since 1959, and relocating to the Lower Manhattan district. AFP PHOTO/Don Emmert (Photo credit should read DON EMMERT/AFP/Getty Images)
Photo by DON EMMERT AFP—Getty Images

You can’t take the Warner out of Time Warner (TWX), but apparently you can kick Time to the curb. And get paid in the process.

Time Inc., the venerable magazine publisher whose titles include Fortune, this morning was spun out into an independent company by Time Warner and has begun trading on the New York Stock Exchange under ticker symbol  (TIME).  Not only do shareholders in the former parent get new Time Inc. stock, but Time Warner also received $600 million via a one-time dividend paid out of Time Inc.’s $1.3 billion in recently-issued debt.

Here’s the bull case for Time Inc: For years, the company had basically served as a piggy-bank for Time Warner, generating hundreds of millions of dollars in profit that it rarely got to reinvest in its own business. Why rock the boat with new digital initiatives when the paper mags provided steady, if declining, treasure? Now Time Inc. gets to chart its own course with new management, and already has begun bulking up its Web properties (including this site, which launched just last week with more than a dozen new staffers). In short, innovation will no longer be stifled. Time Inc. already has plenty of brand equity, and now it actually gets to evolve the brands to meet the current market.

Here’s the bear case: Time Inc. may not actually know how to innovate, or at least not how to do it at scale. After all, it’s pretty tough to flip the switch when those mental muscles have been atrophied after more than a decade of being told “No, don’t spend money on that.” The up-and-coming digital talent wants pre-IPO stock at places like Buzzfeed, not options in a maxed-out Time Inc. Plus, there is all that new debt. It’s not completely unwieldy, but certainly makes Time Inc. less nimble than a rival like News Corp., which received $2 billion in cash and zero debt when it was spun off (NWSA) last year.

Here’s the pragmatic case: There have been concerns that Time Inc. shares would sink like a stone in the early days. After all, Time Warner shareholders have been told for years that Time Inc. is a drag on earnings, so wouldn’t they want to dump fast when given the new shares? Short-seller paradise. But Time Inc. stock actually climbed in pre-market trading, suggesting two factors in play: (1) Shorts may be holding off, out of fear that they’d get squeezed if Time Inc. manages to sell off a crown jewel or two. (2) Time Inc. still does have much better financials than its reputation indicates, and even skeptics may be a bit curious to see a quarter or two of independent performance.

This is where it’s worth emphasizing that I don’t come to this as an unbiased reporter. Instead, I’m on the inside looking out. My colleagues and I seem to share a sense of time-constrained optimism. It’s a sprint for the privilege of running the longer race. Consider Time Inc. a startup of sorts, or at least a leveraged reboot with an extraordinary amount of brand equity. Like most startups, there is a high probability of failure. But it is hardly predetermined.

Correction: An earlier version of this story incorrectly said that Time Warner, rather than Time Warner shareholders, would initially receive the majority of Time Inc. stock.