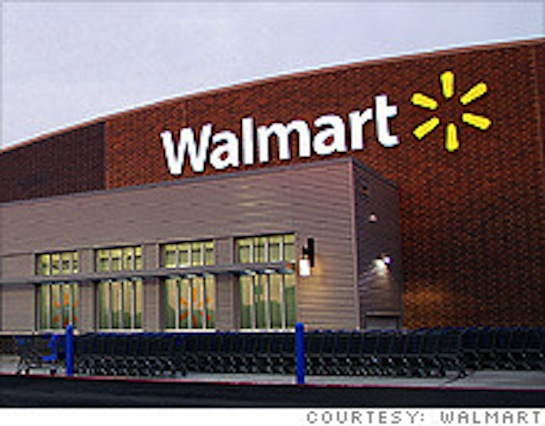 Wal-Mart, one of the nation’s largest, most-profitable companies, has received $104 million in tax breaks for giving its executives huge bonuses, according to a report released on Wednesday.

The retail giant received tax write-offs for doling out $298 million in performance pay to executives over the last six years, according to the report’s authors, the Institute for Policy Studies, a Washington think tank, and Americans for Tax Fairness, a coalition of 400 national and state organizations for tax reform. Such loopholes ultimately cost regular taxpayers dearly in terms of government service and higher tax rates, the groups said.

Frank Clemente, the executive director at Americans for Tax Fairness, called the tax break “outrageous” and added that it’s “truly one of the most perverse loopholes of all time.” Sarah Anderson, the global economy director at Institute for Policy Studies, said that the $104 million “would have been enough, for example, to cover the cost of providing free lunches for $33,000 children.”

“What’s even more outrageous is that this is a company that pays its workers so little that many of them must rely on such public assistance programs,” she said in a statement. The groups released the report in prelude to Wal-Mart’s (WMT) annual meeting scheduled for June 6.

This isn’t the first time that Wal-Mart has been targeted by the organization, a company spokesman said. “This is the same group that put out a similar flawed report last year based on promoting their agenda rather than on the facts,” he said.

The spokesman continued, “Unlike some companies, Wal-Mart pays billions of dollars per year in U.S. federal, state, and local taxes, helping to fund education, public safety, and infrastructure improvements in the communities where we operate.” He also said that Wal-Mart is a pay-for-performance company, adding, “our executive compensation program has been developed in the same way as other companies across America and it complies with the federal tax laws.”

The report, titled “Walmart’s Executive Bonuses Cost Taxpayers Millions,” focuses on tax law that allows companies to deduct unlimited amounts for performance-based compensation. The law was put in place in 1993 in order to discourage excessive pay, according to the study, which goes on to say that Wal-Mart has abused the law.

Former Wal-Mart CEO Michael Duke, who was replaced suddenly at the end of 2013, received $116 million in stock options and performance-based compensation over five years, which lowered federal tax payments by $40 million, according to the study. Meanwhile, Doug McMillon, the current CEO, is said to have received $58 million in performance-based compensation that translates into a $20 million tax break.

Some members of Congress have introduced legislation to change law to prohibit tax deductions for executive bonuses. Rep. Lloyd Doggett, a Democrat from Texas who is pushing such a bill, excoriated big corporations for forcing small businesses and families to pay more because of the current tax law.

“Publicly held companies like Wal-Mart can continue paying their executives multimillion dollar bonuses; just don’t expect the American taxpayer to pick up your tab,” he said in a statement. “It makes no sense for working families to subsidize those making nearly 300 times the average worker.”