Words are dead. Here’s what will replace them. 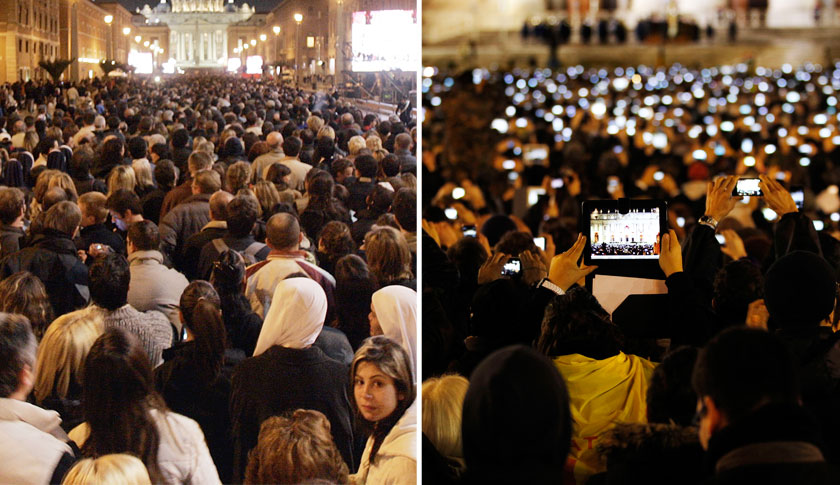 In the spring of 2013, two digital photos became an Internet sensation. The first, taken in 2005, depicts a crowd gathered at the Vatican for Pope John Paul II’s funeral. It is shot from behind—backs of heads turned up, and in the bottom right corner, a lone flip phone pointing toward a balcony. The second, taken from an analogous spot in 2013, depicts another throng welcoming the new leader of the Catholic Church, Pope Francis. The photos are nearly identical except for one defining feature. In the 2013 shot, a sea of screens—iPhones, iPads, Androids—rises up above the heads of onlookers, offering a powerful permanent form of witness.

Something profound has happened in the time between that first photograph and the second: Cheap, dead-simple cameras have crept into everything. By one analyst’s estimate, a billion cameras were added to smartphones and tablets manufactured in 2012. All these cameras have made billions of people into photographers, able to capture and share images of anything with a basic technical proficiency. No one needs to know how a camera works. No one needs to know what an f-stop is, or how to manipulate darkroom chemicals. No one has to be a good photographer to take good photos. One only has to point, shoot, and share.

According to Mary Meeker’s annual Internet Trends report, released May 28, we currently upload and share 1.8 billion photos every single day. This sheer abundance has redefined the nature of the photograph entirely. Pictures are no longer precious; there are just too many of them. Once collected and preserved as art, or to document memories, they are now emerging as a new language, one that promises to be both more universally understood and accessible to anyone. Witness the rise of a new visual vocabulary. Photos, along with emojis, video snippets, GIFS, and other imagery, are replacing written language for many of the things we once relied on words to express.

We’ve seen this mass shift in literacy before. Until fairly recently in history, literacy was restricted to the professionals—a small group of educated scribes and religious figures understood to be fit to translate Biblical texts and render contracts. In the 1400s, Europeans were considered literate if they could spell their names—and 80% could not. Then came the printing press. Within a century, people could read and write in growing numbers, and the literate were able to express complex ideas in writing. This mass shift in literacy ushered in progress in science, general education, and the arts. We are now entering a similar period for images. Our smartphones and the Internet that enables them are the modern-day equivalent to movable type, and these tools are still very new.

Like many mainstream Americans, I uploaded my first digital photograph to a website called Shutterfly in 1999. An early adopter, I registered for a Facebook account in 2005, though it took three years for my friends and family to join the service with enough mass to make it a reliable platform for communication. And I got an iPhone in the fall of 2007, shortly after Steve Jobs introduced a device so radical it transformed the phone into a camera.

Now it’s 2014, and I have taken 500 photos in the past month. They include a daily snapshot of my dog on our morning walk, holiday photos of family members cooking together, photos of my notes from interviews, of business cards, the tag to a dress I might buy, the milk I need to pick up from the store. And a hastily snapped “selfie,” or self-portrait, of myself frowning in the dentist’s office, sent to my partner to make the point that I hate visiting the dentist.

For the most part, these photos are not designed to document an occasion. They have become a visual shorthand that is at once more emotionally resonant and more efficient than the words I might once have used to express the same ideas. This shift in the nature of communications will have a substantial effect on culture, business, and politics. It’s already reshaping entire industries from advertising to journalism to fashion. It’s powering political campaigns and will help decide elections. It’s changing the American approach to foreign diplomacy. It’s redefining art and our relationship with the cultural institutions that embody it.

Those who embrace this shift early have the opportunity to amass influence in their fields and gain power among their peers. How, you ask? Read on. In this month’s series, I plan to chronicle the stories of the people and businesses enabling and evolving new forms of visual literacy. I will write about the toolmakers—the entrepreneurs attending the LDV Vision Summit June 4 in New York, where they’ll discuss computer vision and trends in communications technology. I will introduce you to the communicators—the artists like Mississippi-based Melissa Vincent who are building hundreds of thousands of followers on Instagram, and discovering new ways of telling stories in the process. And I will shed light on the decoders like Brian Kennedy, the director of the Toledo Art Museum, who has developed a curriculum for visual literacy.

The future belongs to the visually literate. May you be among them.