The most disliked car of the year (so far): 2014 Cadillac ELR 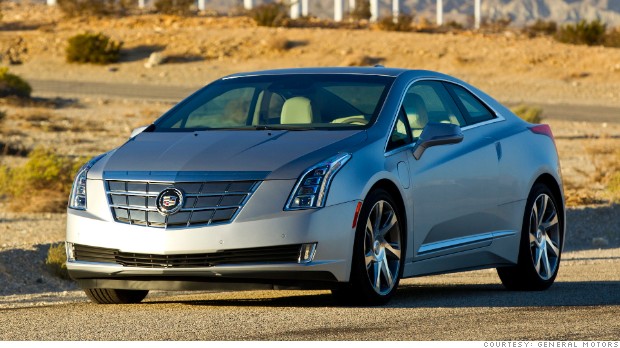 General Motors (GM) has far more pressing issues to deal with — recalls, lawsuits, and congressional investigations, to name just three. But some of its dealers have an immediate problem they’d like to solve: how to move the unloved Cadillac ELR off their lots. Launched in December, the pricey coupe is selling more slowly than any new car in memory. Its stubborn inability to find a market makes it, by a wide margin, the most disliked car of 2014 (so far).

Buyers are avoiding the ELR in droves. Ownership is more exclusive than Augusta National. Only 61 ELRs found customers in April, bringing the year’s total sales to 241. It isn’t that buyers are abandoning Cadillac; it has sold nearly 11,000 CTS’s this year and more than 10,000 ATS’s. But shoppers are walking past parked ELRs on dealer lots as if they were still buried in winter’s snow. Automotive News calculated that at the end of April, 1,700 unsold ELRs were scattered at retailers around the country, which amounts to a two-year backlog. Some other cars have proved relatively sales-proof in recent years — sportback models like the Acura ZDX and BMW X6 spring to mind — but the ELR puts them all in the shade.

With unusual unanimity, the automotive press has lasered in on ELR’s fatal flaw: It uses the same plug-in hybrid technology as the Chevrolet Volt but costs far more, earning it the moniker, “the $75,999 Volt.” Edmunds.com observed, “Although the time has arguably come for luxury-brand plug-in hybrids, this coupe simply doesn’t have the performance credentials, refinement or day-to-day functionality to justify the asking price.” Consumer Reports’ diligent engineers suffered sticker shock: “Sleek, luxurious plug-in hybrid is priced out of its league.”Autoweek didn’t like the noisy gasoline engine, tight backseat, or small trunk, and noted, “The problems begin when you look at the 2014 ELR’s price tag, which is more than double that of the Volt.”

In an effort to justify the higher price, Cadillac smothered the ELR’s interior in leather, wood, and Alcantara, an artificial suede made of polyester and polyurethane. The exterior seems to combine every styling trick that Cadillac has used in the past five years, applied to a body with proportions more appropriate for the 24 Hours of Le Mans. But piling on expensive features and glitzing up the exterior can’t compensate for dynamic shortcomings and lack of exclusivity in testers’ eyes. Observed Car and Driver: “Cadillac is betting that the stunning shape of its ELR coupe makes it worth twice the price of the Chevrolet Volt on which it’s based. Is Caddy onto something, or just smoking something?”

About the only positive comments came from the Detroit Free Press, where a hometown production rarely gets a bad review. Confidently declaring that most of what you’ve probably heard about the ELR is wrong, its car critic apparently confused a high price with desirability and praised it as a “legitimate luxury coupe.” He compared the Cadillac to BMW’s $135,700 hybrid i8, and Porsche’s $99,000 Panamera plug-in, as well as its hybrid $845,000 918 Spyder, and determined that “the ELR could be a bargain.”

So how did a misguided missile like the ELR ever get to market? Here is one narrative:

Looking to layer some glamour onto the dowdy Volt, GM took a wildly styled, if transparently impractical, concept car from the 2009 Detroit auto show called the Converj. The automaker then toned it down for production with smaller tires and rear-view mirrors, and equipped it with the Volt’s unique powertrain combination of electric motor backed up by a gasoline engine (“extended-range EV” in GM-speak).

The result was like a horse designed by a committee. Instead of a thoroughbred, GM produced a camel. The racetrack styling, which looked so otherworldly on the auto show stand, now seems wildly out of place on a car that takes nearly eight seconds to get to 60 miles per hour and manages a top speed of only 110. “The ELR’s looks are opposite of every successful alternative-propulsion vehicle on the road,” observed Road and Track. “It’s aggressive, brash, and in-your-face in a far-too-Tony-Soprano kind of way. That styling works fine in New Jersey but directly contradicts the ELR’s fuel-saving mission.”

Any car with that kind of mixed ancestry (which evokes memories of the 2001 SUV/minivan Pontiac Aztek) is unlikely to succeed, regardless of price. And in a bizarre attempt to recover some of the cost associated with building and marketing a low-volume vehicle, GM priced the ELR at a level that invites invidious comparison with other vehicles. Not only is this cramped four-seater the most expensive car in Cadillac’s lineup, it makes Tesla’s Model S look economical. The Tesla (TSLA) may cost the same, but it goes faster, runs farther on an electric charge, and carries more people.

In ELR, GM has repeated many of the mistakes it made with the first-generation Volt, which is now selling at a rate of 1,500 cars a month and can safely be labeled a flop. (GM has the capacity to build 60,000 Volts a year). The automaker developed a complex and expensive propulsion system with benefits that were not widely understood, packaged it in an inefficient body that didn’t communicate the right messages, and then priced the car to reflect its costs rather than market demand.

With few alternatives left, GM has resorted to distress pricing for the ELR, offering discounts for test drives and home charging equipment along with plain old cash on the hood. Once GM’s new managers dig out from the avalanche of recalls, it will be interesting to see what they do with a car that seems to repeat so many of the mistakes made by the old GM.