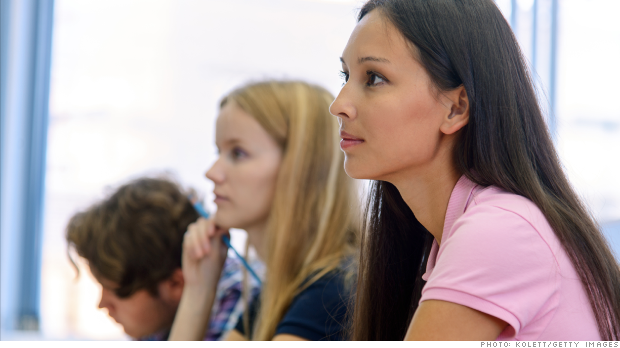 FORTUNE — It would be tough to find a better illustration of the acute need for big-data skills today than the situation KeyCorp (KEY) has been experiencing. Over the past year or so, big-data positions there have been taking twice as long to fill as other professional roles have, said Amy Brady, the company’s chief information officer — 100 to 120 days on average, rather than 55 to 60.

“Those skills are incredibly hard to find,” Brady said. “We have examples in our risk analytics and quantitative groups of roles that have been open for a long time.”

“There is a shortage,” Durney said. “I think it’s driven by a couple of things. One, so many companies are looking to fill these needs at the same time. Everybody is trying to do something with their data. The other piece is, you just don’t have the build-up of supply, partly because the demand has increased so rapidly.”

There are an average of 1,894 big-data jobs posted on Dice on any given day, Dice spokeswoman Rachel Ceccarelli said. That’s up 41 percent year on year; two years ago, only 438 such jobs were listed.

MORE: How a scrappy young startup plans to turn the massive database market on its ear

In 2012, the market research firm Gartner predicted that 4.4 million IT jobs would be created globally to support big data by 2015, including 1.9 million IT jobs in the United States.

How those jobs would be filled, however, wasn’t entirely clear. Until recently, big-data education programs were few and far between. In the last few years, graduate, undergraduate, and professional-education programs have begun popping up to address this gaping need. Now that they’ve begun to emerge, the demand is considerable.

“There has been tremendous interest,” said Erik Brynjolfsson, a professor at the Sloan School of Management at the Massachusetts Institute of Technology. Along with professor Sandy Pentland, Brynjolfsson will be teaching an executive education course this summer entitled, “Big Data: Making Complex Things Simpler.” Pentland said a recent MIT course on big data, offered through the online education service edX, “had super-fast sign-up — 1,000 people per day.”

“We have more data than ever,” Brynjolfsson said, “but understanding how to apply it to solve business problems needs creativity and also a special kind of person.” Neither the “pure geeks” nor the “pure suits” have what it takes, he said. “We need people with a little bit of each.”

MIT’s big-data education programs have involved numerous partners in the technology industry, including IBM (IBM), which began its involvement in big data education about four years ago. IBM revealed to Fortune that it plans to expand its academic partnership program by launching new academic programs and new curricula with more than twenty business schools and universities, to begin in the fall.

To date, IBM has invested more than $24 billion in R&D and acquisitions to build the company’s capabilities around big data and analytics, and it employs about 15,000 consultants and 400 mathematicians to focus exclusively on the area. Business analytics is now a nearly $16 billion business for the company, IBM says — which might be why it is interested in cultivating partnerships with more than 1,000 institutions of higher education to drive curricula focused on data-intensive careers.

“Every profession in the enterprise is being transformed by the vast amounts of data that are now available,” Jim Spohrer, IBM’s director of university programs, said. “Big data is clearly impacting every industry and profession.” Spohrer added that IBM plans to put equal emphasis on the business and technical aspects of the topic.

Michael Goul, chair of the Information Systems department at the W. P. Carey School of Business at Arizona State University, which last year launched a Master of Science in Business Analytics degree and is now adding a Bachelor of Science in Data Analytics program as well, said the impetus for his school’s program came from its advisory board.

“We came to the conclusion that students needed to understand the business angle,” Goul said. “Describing the value of what you’ve discovered is just as key as discovering it.”

ASU started its master’s program small, with an initial cohort of five students last fall. Today, it has matriculated 100 and is shooting for two groups of 50 next year. Meanwhile, the number of applications to the master’s program has jumped from 159 in 2013 to 298 applications as of early May.

To support all that demand, the university has hired several new faculty over the past three years, Goul said.

Case Western Reserve University, meanwhile, is offering a new undergraduate program in data science and analytics that aims to provide a broad range of students with industry-specific skills to capitalize on big data for competitive advantage.

“Most programs so far have been in the graduate and professional-education area,” said William “Bud” Baeslack, a provost at Case Western. “We’re expecting large numbers of students.”

MORE: A big data look at the lime shortage

In addition to its undergraduate major program, Case Western will also offer a minor in applied data science targeting students in management, finance, nursing, engineering and other fields. “We’re designing this minor to represent the breadth of fields data science will practice in,” said Don Feke, the university’s vice provost for undergraduate education. “By offering both a major and a minor in data science, we can essentially ‘data enable’ a wide range of students, including those studying computer science, mathematics, communications and marketing. The opportunity is far-reaching.”

That’s by design. Companies like KeyCorp believe that data science skills will be needed in myriad ways in the future, Brady said. “We need all levels of education — undergraduate, graduate and executive,” she said. “Even high schools can play a role.”

While much of the focus so far has been on graduate programs, “we’re excited about IBM’s focus on undergrad programs,” she said. “We don’t need all Ph.Ds. There’s also a need for entry-level people that you can grow in your own organization — the undergraduate part is critical to the sustainability of this model.”

In fact, “I’d encourage all students in any field to have some kind of data-analytic coursework by the time they graduate,” Brady added.

Of course, industry players like IBM stand to benefit as well — and not just on the hiring end, Dice’s Durney said. “There is opportunity for companies to get behind it and push it, and that helps give it momentum,” he said.

Spohrer said that IBM sees its educational outreach around big data “as an enormous business opportunity to help us grow and help our customers.”

“I like to say [that] the best way to predict the future is to inspire the next generation of students to build it better,” he said. “Give them the opportunity to invent the next transformation.”