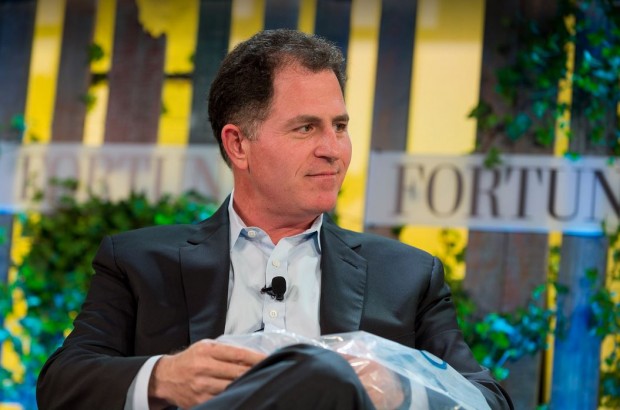 FORTUNE — Michael Dell appeared earlier this week at Fortune Brainstorm Green, our annual conference focused on the intersection of business and environmental responsibility. It seems that Dell Inc. makes a lot of its packaging out of sustainable materials, including some sort of mushroom mixture that Michael and Fortune managing editor Andy Serwer tasted during the interview (skip to 15 minute mark in video below).When Andy tried to ask a few more “standard” questions about how Dell Inc. has performed since being taken private last fall, however, he didn’t get very far. Michael Dell did say that the company’s tablet sales tripled between Q3 and Q4, and also that it is expecting double-digit PC sales growth this year. Beyond that, he fell into the rote “we’re private now” talking points. So I figured I’d look up how Dell Inc.’s financial statements. After all, leveraged buyout debt is typically registered with the SEC, which means that the issuer is subject to regular reporting requirements. The “value-add” of going private isn’t so much less disclosure as it is less short-term scrutiny by bank analysts and hedge fund managers,

But there are no public financials on Dell since last fall, because the company structured all of its bonds as Rule 144a for-life.

RELATED: Long live the Dell PCFor those unfamiliar with Rule 144a for-life offerings, they basically rely on a 2008 rule change that permits unregistered bonds to trade freely just 12 months after being issued (as opposed to the previous two-year waiting period). For the first few years of this rule, 144a for-life offerings were relatively rare, due to liquidity fears that tacked on between 25 and 50 basis points. But now those concerns seem to have subsided, with the price bump virtually gone.“There really isn’t much reason for anyone to not use 144a for-life when issuing high-yield debt related to LBOs,” says Justin Breen, a partner with corporate law firm Proskuer. “And I think you’re beginning to see that get recognized, based on the increasing percentage of use.”

Indeed, Proskauer reports that 56% of global high-yield issues last year were done under Rule 144a for-life, while sponsor-backed deals were closer to 70%. And the percentages grow alongside deal size:

Companies like Dell do still need to report earnings to bondholders and prospective bondholders/analysts, but now do so via confidential, password-protected websites. They also are exempt from some of the normal 8-K disclosure requirements, like certain management changes.So, in short: When companies like Dell go private now, they really mean it. And the amount of public disclosure is only going to decline.