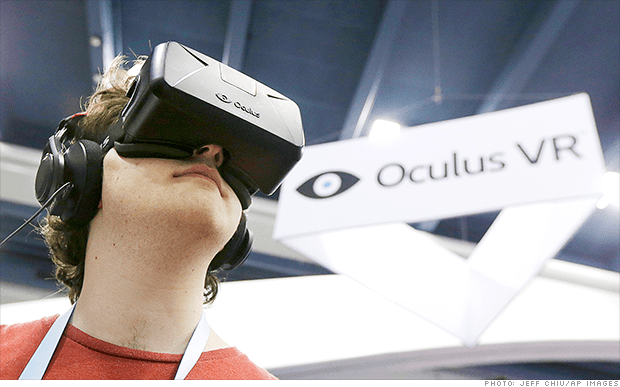 FORTUNE — Some lucky kids will soon be able to test the virtual reality headgear made by recent Facebook (FB) acquisition Oculus Rift while surrounded by cheap pizza and singing robotic animals.

Chuck E. Cheese’s, the restaurant and entertainment chain “Where a kid can be a kid,” said Tuesday the headset will be part of a new Virtual Ticket Blaster Experience birthday package that will be available in select markets for a six-week trial-run starting this week. The package adapts the chain’s normal Ticket Blaster experience — wherein the birthday boy or girl goes into a booth and attempts to grab as many falling gaming tickets as possible — in virtual reality.

Considering that a consumer version of Oculus Rift’s product has yet to be released commercially, the Chuck E. Cheese’s offer may be one of the first opportunities for members of the public to try the hardware outside of a tech conference — that is, assuming their parents make a birthday party reservation. The birthday packages will be available at Dallas-Fort Worth area Chuck E. Cheese’s locations as early as today, with the equipment becoming available at more locations in that area, as well as Orlando, Fla. and San Diego, later this month.

The Oculus Rift headset features 360-degree head-tracking technology along with 3-D views that let users “feel as though they are inside the Ticket Blaster with Chuck E.,” the company said. The headset will track the number of virtual tickets grabbed by the birthday kid, who can then redeem them for merchandise. The company says the Virtual Ticket Blaster game was developed by Dallas-based visual effects studio Reel FX.

Roger Cardinale, president of Chuck E. Cheese’s parent company CEC Entertainment, Inc., said in a statement that children currently have “unprecedented access” to gaming options. “Our challenge is to deliver an experience not available at home, and there is no doubt virtual reality does just that. Oculus Rift technology is the next frontier in the gaming industry, and we’re thrilled to be able to say it’s part of the Chuck E. Cheese’s lineup,” he said.

In March, Facebook agreed to pay $2 billion to acquire Oculus Rift, which got its start raising capital through Kickstarter before finding venture funding. The Irvine, Calif.-based company is expected to release its first commercial virtual reality headsets sometime next year. (CEC Entertainment was also recently sold, with buyout firm Apollo Global Management paying $1.3 billion for the company earlier this year.)

Chuck E. Cheese’s may seem like an odd choice for an early look at the virtual reality gaming platform, but the chain’s founder, Nolan Bushnell, is no stranger to working with gaming startups, having also co-founded the pioneering video game company Atari. As The Atlantic’s Alexis Madrigal pointed out last year, Bushnell actually came up with the concept of Chuck E. Cheese’s as an extension of Atari, whose coin-operated games were featured prominently at the chain’s early locations, allowing Bushnell to “vertically integrate the market.”