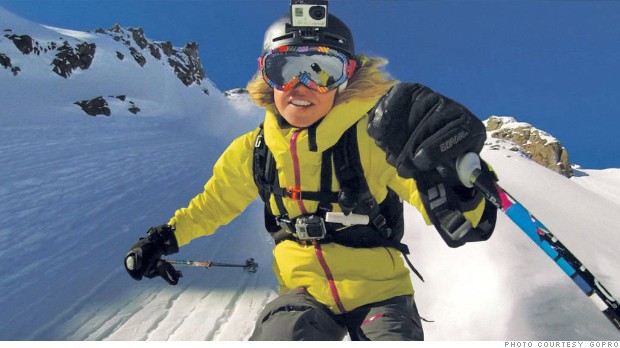 FORTUNE — Last week, just days before unveiling its first public filing for an initial public offering, GoPro’s marketing and media teams held a two-day event in Oahu, Hawaii for about 100 of their top sponsored athletes. The impressive lineup included snowboarder Shaun White, professional surfer Alana Blanchard, and gravity-defying extreme mountain bike rider Kelly McGarry. On the agenda? Stand up paddling, kayaking, and boat-diving with sharks. Also on the agenda: Tutorials on how to create the most killer — and viral — GoPro content on the web.

The action camera maker raked in $985.7 in revenue last year (profit came in at $60.6 million) from sales of its small, somewhat boxy cameras and outlandish product line of accessories. (Athletes at last week’s event in Oahu were equipped with head and chest straps, an array of tripods and other mounts, and even small floatation devices for their cameras.) Yet despite its massive growth and marketing prowess, the San Mateo, Calif.-based company’s future at least partly rests on its ability to transform itself from a hardware powerhouse to a lifestyle empire built on content.

GoPro’s newish media strategy isn’t all that new. Over the last few years, it has slowly inked deals to distribute its videos via different venues, including a dedicated channel on Virgin America flights. According to the company’s recent S-1 filing: “To date, we have generated substantially all of our revenue from the sale of our cameras and accessories and we believe that the growing adoption of our capture devices and the engaging content they enable, position GoPro to become an exciting new media company.”

In a packed ballroom last week at the company’s “athletes’ summit,” many of its executives took to the stage to welcome the abnormally fit audience in the room. As a sea of people sporting Red Bull baseball hats (the popular energy drink manufacturer sponsors many of GoPro’s athletes) looked on, GoPro spewed out some impressive stats — more than 7.2 million “likes” on Facebook, more than 2 million Instagram followers, and more than 1.8 million subscribers on YouTube, where the company is ranked as the No. 1 consumer brand.

Take a quick look at some of GoPro’s available content and you’ll see why. From a video of a guy hugging a lion to base jumpers in stilettos, there’s a lot of adrenaline-pounding footage to watch. Of course, there are also plenty of duds — not everyone can pull off what professional athletes and crazy zookeepers can do. Lots of people use GoPro cameras to capture their personal ski runs, or to mount on their dog’s head, or to get somewhat normal family footage.

And there’s the rub: For GoPro to keep growing, it will need to not only keep expanding its base of professional athletes and give incentives to everyday folks to strap on a GoPro and try a crazy stunt, but expand its paid channels of distribution. “As of December 31, 2013, we had not derived revenue from the distribution of, or social engagement with, our content on the GoPro Network,” the company states in its S-1 filing. “However, we plan to pursue new revenue opportunities from the distribution of engaging GoPro content in the near term.”

At the recent GoPro summit, many of the athletes in attendance didn’t know that the company was slated to go public. They gladly strapped on their GoPro cameras while slipping into a cage to view sharks in the open waters, even capturing the aftermath — three of the athletes and members of GoPro’s team vomited over the side of the boat after becoming seasick (giving a whole new meaning to the term viral video).

But while many of GoPro’s sponsored athletes would probably make use of the small camera regardless of whether the company paid them to or not, the process of capturing, editing, and distributing footage has become much more of an operation. The company now has about 80 people on its media team, including video editors for every vertical. That also means the expectations on athletes have mounted — a cool trick is great, but at last week’s event GoPro’s marketing managers extolled the virtues of storytelling, not just capturing their daily routines. Those kinds of videos often require multiple cameras from multiple angles, not to mention a bit more thought and manpower. And even professional, gravity-defying athletes can sometimes run out of new things to try.

Of course, some of GoPro’s greatest hits have been surprisingly amateurish videos uploaded and shared by everyday people. But while GoPro’s cameras have been a wild success, the content business is much more hit or miss — something GoPro surely already knows, particularly assessing all of the risks associated with its planned public offering.