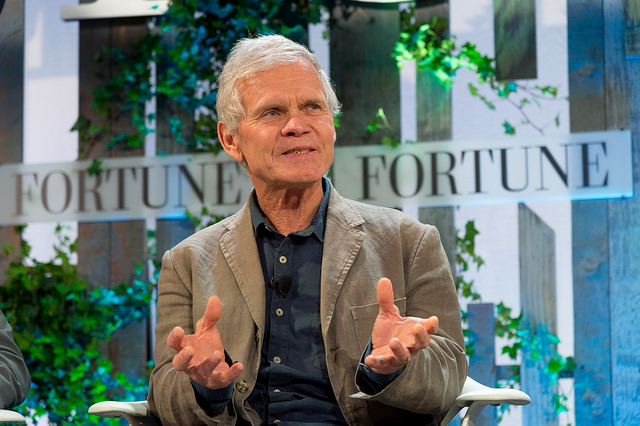 FORTUNE — How can companies get consumers to help combat climate change?

For Rick Ridgeway, vice president of environmental initiatives at outdoor apparel retailer Patagonia, the answer sometimes means going against the principle mission of his company: to sell clothes.

Last summer, the company announced that it would start buying back and reselling customers’ used Patagonia gear as part of its Worn Wear program. The campaign “encourages customers to think twice about whether they need to buy anything in the first place,” Ridgeway explained Monday during Fortune’s Brainstorm Green conference.

The program saves customers money and is good for the environment, Ridgeway said, but it still protects Patagonia’s bottom line since the company hopes that when customers really do need new clothes, they’ll still invest in the company’s long-lasting and repairable gear. He adds that, through Worn Wear, the company is appealing to new American consumer behavior and consumption habits that developed during the 2008 recession when people began recognizing that investing in quality products was a better value proposition.

Another panelist, Jonathan Bass, director of communications at SolarCity (SCTY), agreed that catering to consumers’ financial concerns is key to getting them to make decisions that are good for the environment.

He told the Brainstorm Green audience that a recent survey of 1,400 American households found that 62% of respondents were interested in solar power for their own homes. But of the 110 million households in the United States, just 500,000 are solar-equipped. “Consumers don’t like to change, you have to give them a compelling reason to do so,” he said And the rising cost of retail electricity might be SolarCity’s best selling point.

Solar power can help consumers save on their utility bills in 15 states — many of which have big incentives for renewable energy, Bass explained. “SolarCity comes close to doubling every year, we’re moving in the right direction not because we’re an app that’s going to go viral,” he says, but because the company is giving consumer a discount on their utility rates.