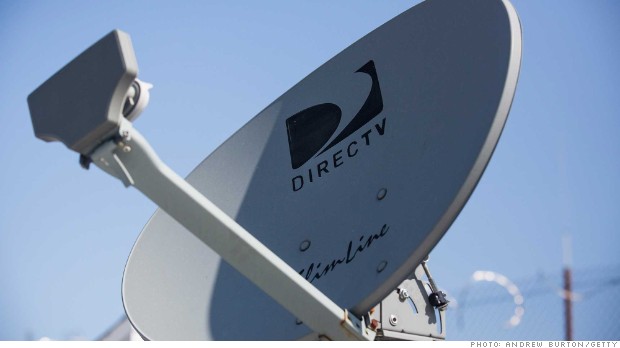 FORTUNE — I’ve got a hot stock tip for you.

Buy every outstanding share of DirecTV (DTV) and offer to pay $85 a share for the satellite television provider. You’ll make $5 billion and change overnight, probably. Please send your commission check to Fortune c/o me.

There is one little hitch, of course.

Someone else, AT&T (T), has already offered to buy DirecTV, and the telephone and Internet provider is willing to pay $95 a share. So, only people who hate money, or don’t read the news, would be willing to sell it to you for $85, right? Apparently, no.

Shares of DirecTV were trading below $85 on Monday, down nearly $1.50 on the news that AT&T was going to buy the company. More than 26 million shares had traded hands around that price. So, go ahead, make billions. Wall Street is giving it away.

This is, of course, odd, but perhaps not as peculiar as it seems. Shares of acquisition targets often trade for less than their proposed purchase prices. There’s the risk that the deal won’t get done. Plus, you don’t get your money immediately. And some people thought AT&T would offer as much as $100 per share for DirecTV.

Still, the $10 gap is large, especially at a time when there doesn’t seem like a heck of a lot of other places left to make money. There is, in fact, a whole micro-culture of people on Wall Street who specialize in making money off those no-brainer bets, merger arbitrage. Their trading tends to narrow the gap. But that doesn’t seem to be happening this time.

Here’s another way to look at it: A week ago, AT&T had a market cap (the total value of all its shares) of $197 billion, and DirecTV’s market cap was $46 billion, for a combined $243 billion. Today, the two companies’ total market cap is $232 billion. In other words, the market thinks AT&T and DirecTV is a deal where one plus one equals 1.9.

On a conference call Monday morning, AT&T CEO Randall Stephenson spent a lot of time talking about going “over the top,” which is actually not a metaphor but an industry term for delivering video wirelessly directly to your house. That’s something the TV that I grew up with did very well (for seven channels), but AT&T and others have been talking about it a lot recently. Forget about whether AT&T will actually be able to get its 70 million subscribers to sign up for DirecTV, or what it will have to do to integrate the two companies and their technologies. There is, apparently, a good deal of “over the top” potential in this deal.

At the same time, a good portion of what’s driving this deal seems to be financial. AT&T is not a company that’s full of growth potential. So, to attract shareholders, it has promised a big dividend. As AT&T has done more deals in search of growth, often paying with stock, its total dividend payout has grown. Last year, it was $9.7 billion.

But the pot from which it can pay out those dividends is shrinking. Two years ago, AT&T had $19 billion in free cash flow. This year, before the merger deal, it expected about $11 billion.

DirecTV will add $2.6 billion in cash flow. And DirecTV’s cash pile is still growing, by about 13% last year. What’s more, AT&T says the merger will allow the combined companies to save $1.6 billion a year. Factor that in, and AT&T with DirecTV will have $15.2 billion in dividend available cash.

But remember AT&T is paying for DirecTV partly in stock. If the deal goes through at the current price, DirecTV investors will get roughly 935 million new AT&T shares, the equivalent of $65 for each one of their DirecTV shares. The rest of the purchase is in cash and perhaps some debt, which could eat into that cash flow as well. All those new shares will push AT&T’s annual dividend commitment to $11.4 billion.

Put it all together, and the DirecTV deal, at least financially, doesn’t seem like that much of an improvement for AT&T. The company is paying $67 billion in stock, cash, and assumed debt for DirecTV, so AT&T can continue to pay $10 billion a year to shareholders. It still may not be able to.

Two years ago, AT&T’s dividend equaled 53% of its free cash flow. Last year, it was 71%. With DirecTV, the dividend will eat up 75% of its free cash flow. That’s if everything goes according to plan. If, instead, AT&T messes up integrating DirecTV, or if it only has $400 million in cost savings, as independent analyst Craig Moffett predicts, then the dividend could potentially swallow 81% (or more, even) of AT&T’s cash flow.

Of course, this is not what AT&T’s Stephenson wants you to believe. His company is going over the top. Combined, the cash flow of the two companies will grow much faster. But the market doesn’t seem to be buying it. DirecTV’s stock is trading at a discount to the deal price not because investors think they won’t end up getting AT&T’s shares but rather because they don’t want them.

After Publicis and Omincom called off their merger last week, I wrote how the current M&A wave was getting rougher. As the wave gets bigger, it draws more sharks and more prey. A few weeks ago, Comcast agreed to pay $45 billion for Time Warner Cable — a company that, just a few years ago, Time Warner CEO Jeff Bewkes (Fortune‘s boss for a few more days) wanted nothing to do with.

Now, AT&T’s Stephenson is riding the merger wave with his own deal, paying more for something that will deliver less. Investors don’t appear to like what they see on the other side.