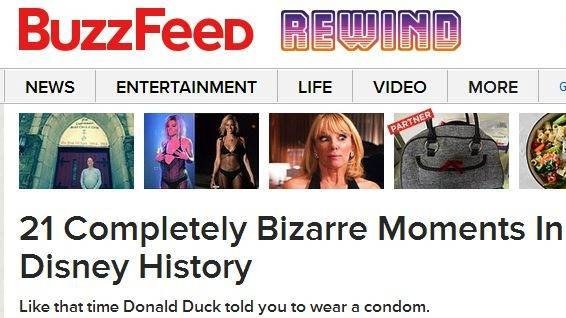 The Walt Disney Co. was in talks to acquire online content juggernaut BuzzFeed earlier this year, Fortune has learned. Talks apparently broke down over price — with BuzzFeed said to have sought upwards of $1 billion — and are not believed to still be active.

BuzzFeed last raised venture capital funding in January 2013, when it secured $19.3 million at around a $200 million valuation. But, even then, investors were touting the New York-based company’s ability to become a billion-dollar property.

Discussions with Disney (DIS) wound down as Disney’s pursuit of multichannel video network Maker Studios heated up. The Maker Studios transaction will be for $500 million, plus possible earn-outs that could bring the deal closer to $1 billion. A source familiar with Disney’s strategy says that the company saw Maker as “a call option on over-the-top content” from multichannel networks — something that it did not want to build itself.

But Disney wasn’t as interested in dropping 10 figures for BuzzFeed, largely because the strategic fit isn’t as tight. Disney focuses on acquiring and aggregating intellectual property, which it can monetize through many channels like licensing, merchandising, TV, games, animation, and theme parks. BuzzFeed’s content ranges from entertainment-style lists to serious reporting, having recently hired Pulitzer-prize winning journalists Mark Schoofs and Chris Hambly.

At the same time, BuzzFeed wasn’t exactly begging to be bought. The company continues to grow quickly and value its independence. In a letter to employees last fall, CEO Jonah Peretti wrote that the company had hit profitability with more than 300 employees and 85 million monthly unique visitors. Moreover, Bloomberg reported that BuzzFeed is forecasting $120 million in revenue in 2014, which would double its 2013 sales.

BuzzFeed has raised a total of $46.3 million in funding from Hearst Ventures, Softbank Capital, Lerer Ventures, RRE Ventures, SV Angel, Founder Collective, New Enterprise Associates, and angel investors. It is known as a leader in the new category of “native advertising,” which sells sponsored content created by an editorial team to brands.

Messages left with Disney were not returned. A BuzzFeed spokesperson declined to comment on the story except to say that BuzzFeed is not in talks with any companies and “is focused on becoming a big, independent company.”