Why homebuilders are still cautious 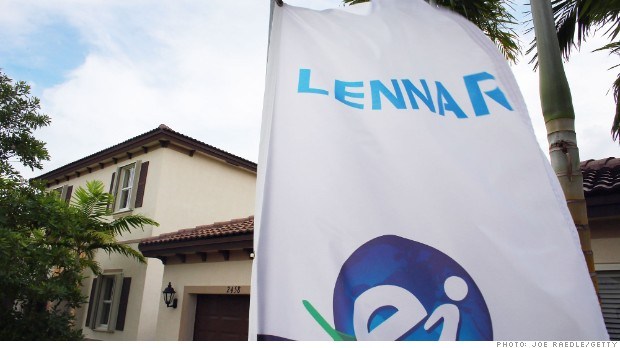 The latest earnings from the nation’s biggest homebuilders would suggest the housing market is recovering nicely. While some of that’s true, the healing process from years of record foreclosures and spiraling home prices are far from perfect. A critical piece is missing: home construction.

That might sound odd, given the recent strong earnings reported by the likes of Toll Brothers, D.R. Horton, Lennar Homes, and Pulte Groupe.

On Wednesday, Lennar (LEN), considered by some analysts to be the industry’s biggest player, reported its earnings climbed 32% as the homebuilder sold more homes at higher prices. This follows positive earnings from luxury homebuilder Toll Brothers (TOL), which reported earlier this month that its earnings rose to $411.4 million, or $2.35 per share during the fourth quarter, compared with $15 million, or 9 cents per share, a year earlier. D.R. Horton (DHI) last month reported that profits during its final quarter rose 39% as higher closing costs boosted revenue; in October, PulteGroup Inc. (PHM) reported third quarter profits that beat analysts’ estimates with revenue rising to $1.58 billion from $1.3 billion a year earlier.

True, builders are building more today than they were six years ago. In November, home construction is at its fastest pace in over five years; housing starts jumped by 22.7% to a 1.09 million annualized rate, the Commerce Department reported Wednesday. Most in the financial media have been reporting that the strong data suggests builders are optimistic in the face of higher mortgage rates. That’s likely true, but November’s data is only one month’s worth. And unlike home prices and foreclosures, the pace of home construction is far from returning to normal.

The government’s latest report on housing starts represents the first time in eight months, and only the second time since 2009, that starts have been above 1 million. Since the housing market crashed at the end of 2007, starts have averaged about 723,000 a month. Historically, housing starts have averaged 1.5 million a month, which means the current pace of home construction isn’t even halfway back to normal, says Jed Kolko, chief economist at Trulia, a San Francisco-based real estate website.

Given the markedly slow pace of building, it’s surprising that investors were excited about homebuilders stocks last year. Altogether, shares of DR Horton, Lennar, and PulteGroup, all of which are listed on the Standard and Poor’s 500 index, were up 102.8% in 2012 — surpassing the overall index, which was up 13.4%, according to FactSet. Super low interest rates combined with a tight supply of homes for sale gave investors the green light to buy homebuilder stocks, but they probably didn’t consider that construction, at least these days, is driven less by those factors than the pace at which new households are formed.

In other words, U.S. home prices might have risen more than 12% this year, but that hasn’t led builders to build that many more homes because a big chunk of unemployed young adults can’t afford to get their own place, Kolko says. Today, only 74.9% of adults ages 25 to 34 have jobs, an improvement from the 73.6% rate during the worst moments of the recession but still lower than the normal rate of 79.3% prior to the downturn. This has held homebuilders back, Kolko adds.

And while the latest earnings of homebuilders look positive, investors have generally turned bearish this year. Homebuilders stocks listed on the S&P are down 4.8% so far this year, while the overall index is up 24.9%, according to FactSet.

What 2014 will bring is anyone’s guess. But if investors are looking to buy into homebuilders stock, look not to home prices or interest rates. Rather, it’s best to keep a close eye on how many young adults will have decent jobs in the coming year.