Why Loehmann’s is bankrupt while T.J. Maxx cruises along 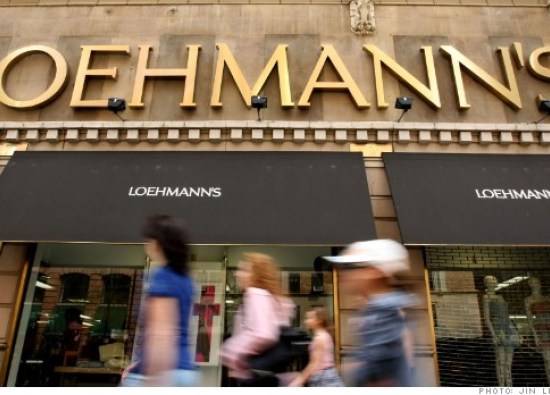 On Monday, Loehmann’s filed for bankruptcy for the third time, citing $100 million in debt. It plans to close all of its 39 stores.

The Bronx-based retailer, which blamed increased competition and a number of strategic, financial, and operating decisions for its decline, joins a growing graveyard of deceased discount retailers that includes the likes of Filene’s Basement, Daffy’s, and Syms.

Meanwhile, another off-price retailer, The TJX Companies (TJX), which owns T.J. Maxx, Marshall’s, and HomeGoods, reported that third-quarter sales at its 3,000 stores increased 9% to $7 billion, as same-store sales grew 5%. It also announced long-term plans to open 2,000 new stores. Likewise, discount retailer Ross Stores (ROST) set a goal of adding 65 new stores in 2013 and reported that third-quarter sales at its 1,100 locations totaled $2.4 billion — a 6% jump — with comparable store sales up 2%.

MORE: Find an apartment in San Francisco? That’d be Lovely

The stark contrast in fortunes among discounters raises the question: What separates the winners from the losers?

In a word: scale.

With each new store opening, T.J. Maxx and Ross have upped their leverage to demand department-store quality goods at lower prices.

Howard Davidowitz, chair of retail consulting and investment banking firm Davidowitz & Associates, explains it this way: “If T.J. Maxx [hypothetically] goes to Van Heusen, and says, ‘We like this $40 shirt you’re selling at Macy’s (M), but we want to retail it for $22. We don’t need the lining and we could use cheaper buttons,’” T.J. Maxx will get what it asks for because it will place an order of one or two million. But if the little guys — with fewer stores and therefore smaller orders — make that same custom request, there’s little incentive for Van Heusen to fulfill it. That leaves smaller stores like Loehmann’s to “scrounge around the market to find deals and order cancellations,” he says. For instance, “if Michael Kors (KORS) has a bad color, that’s what they’ll get.”

Leverage has become increasingly important in a climate where consumer confidence has hit record lows and discounts offered by department and specialty stores are so deep they nearly undercut bargain shops.

“The life blood of the [discount retail] business is on-price vs. off-price. If you can’t beat Macy’s by 30-40%, you have to be different, you have to have a niche,” says Davidowitz. He points to New York-based Century 21, whose sleek layout and gigantic selection feels like a department store, as one example. Plus, when a manufacturer is looking to get rid of excess merchandise, it wants to deal with just one store — likely a big one — that can take all the items at once.

Another factor has plagued Loehmann’s: its own expensive tastes. While T.J. Maxx and Ross offer big name brands, Loehmann’s specialized in selling designer duds. The store would acquire cast-off or leftover apparel from, say, a designer’s spring collection. It would wait to sell those clothes until the next spring, since fashion houses wanted to limit their supply and avoid a situation where an item would be on sale at Loehmann’s while it was also on a rack — at full price – at Bloomingdales.

That model has been upended by online flash sales from Gilt Groupe and Rue La La, which gave designers an alternative way to sell their clothes as they pleased, says Joel Bines, co-lead of the retail practice at advisory firm AlixPartners.

Since 2001, the off-price sector has doubled its market share of total U.S. retail sales (excluding auto), according to a Cowen and Company report from earlier this year. “It’s a great market, but there are competitive advantages that make it a hard space to enter,” says Bridget Weishaar of Moringstar, Inc. “We see smaller stores leaving and no one replacing them.”