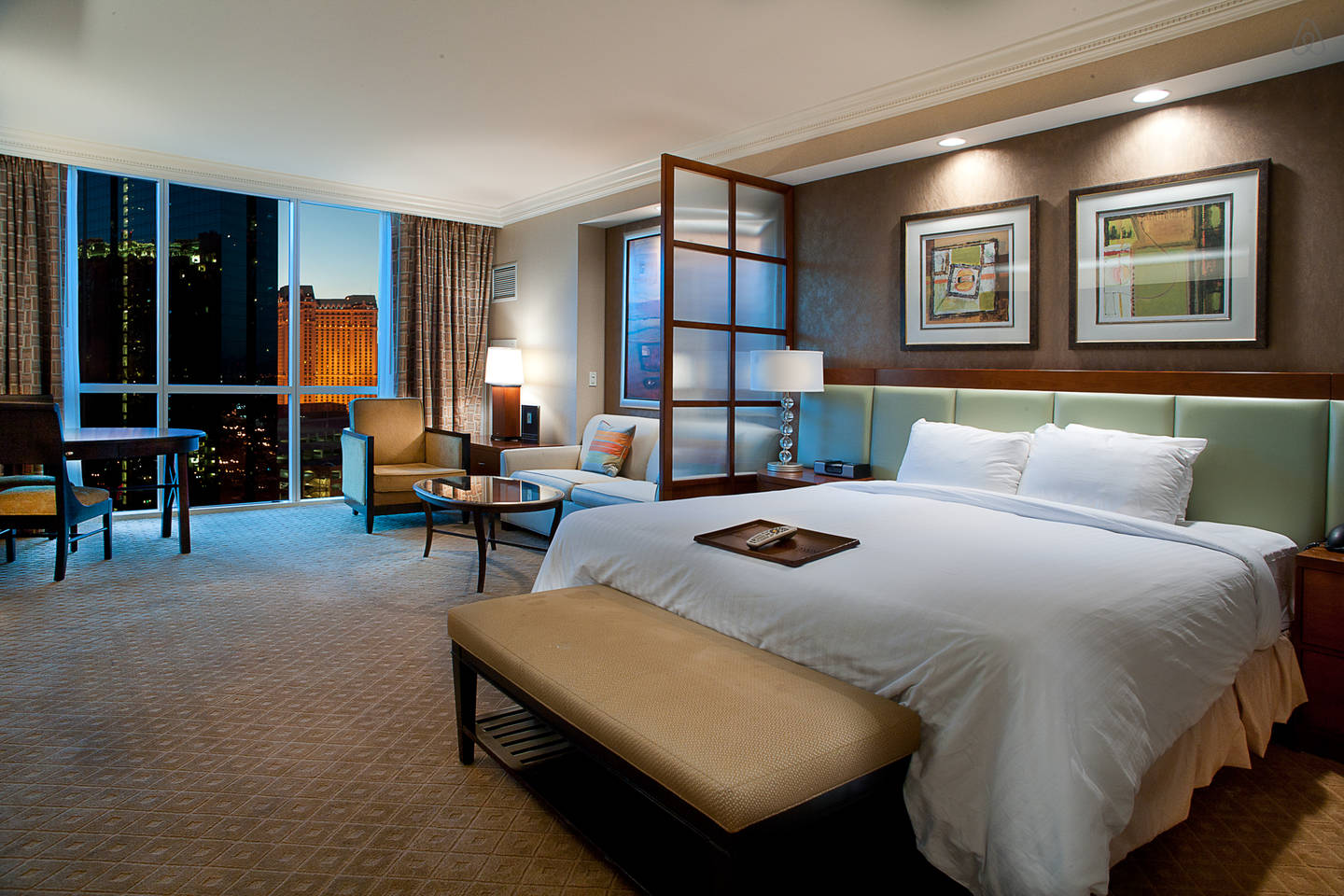 An Airbnb listing at the MGM Grand Signature in Las Vegas, Nevada.
Courtesy of Airbnb

The week before Thanksgiving, roughly 200 Airbnb hosts and community organizers sat shoulder-to-shoulder at The Alley, a Midtown Manhattan co-working space popular with techies. The event was convened by Peers, an organization developed to support the growth of the sharing economy.

An Airbnb host named Mishelle Farer got up to speak. Farer explained how she’d used the money she earned letting out a room in the Williamsburg neighborhood of Brooklyn to fund a public policy degree so that she could launch a career after serving in the military. Now, facing a New York State law that throws Airbnb’s practices into question — people are barred from renting an apartment for fewer than thirty days if a permanent resident of the apartment isn’t present — Farer has turned to Peers.org to launch a petition to clarify it. It has received more than 230,000 signatures so far.

The debate over Airbnb’s legality in New York City is shaping up to be the seminal legal dispute for the sharing economy. The stakes have never been higher for the young San Francisco company, and by extension, any of the tech startups that lay claim to a business that supports the sharing economy.

MORE: Profiting $13K a year on an Airbnb rental? Maybe.

Which is why Airbnb is asking New York State to fix it so that people are allowed to share their homes using Airbnb’s service. The company is now sparring with New York State attorney general Eric Schneiderman, who wants to enforce the law. He takes issue with the hosts who run massive numbers of listings and are not required to pay the city’s 15% hotel occupancy tax. This fall, he subpoenaed the company for its transaction records for 15,000 New York hosts; Airbnb is fighting to keep that information private to protect its hosts. Meanwhile, the move has had a chilling effect on New York City’s 225,000 Airbnb community members, many of whom are understandably concerned about the ramifications of their actions.

Back at The Alley, attendees broke into action teams, segregated by neighborhood, and planned trips to Albany to share their personal Airbnb stories with legislators. Before the legislature convenes in January, New York State senators will likely hear directly from a number of individuals with stories as heartwarming as Farer’s.

While it is true that New Yorkers like Farer stand to benefit tremendously from services like Airbnb, all of the rallying around the sharing economy obscures a larger truth: The Internet is disrupting traditional businesses by providing more effective and better designed services. Over the course of history, lawmakers have set up rules and regulations that are designed to help those traditional businesses — hotels, for example, or taxi services — operate successfully while keeping consumers safe. As new Internet-enabled businesses like Airbnb and the on-demand driver service Uber are introduced, those laws will need to be reexamined.

This process is already happening across the country. The San Francisco city government has been pressing Airbnb and its hosts to assume responsibility for the same 15% “transient occupancy tax” hotels pay. In Grand Rapids, Mich., the City Commission recently withdrew a proposed ordinance change that would have made advertising on Airbnb a misdemeanor; currently, the city government is studying the issue. The city council in sunny San Luis Obispo this fall legalized home-stays and home rentals of less than 30 days. And that’s just Airbnb; Uber’s services have similarly been called into question in a number of U.S. cities.

None of these locations has set a precedent for the industry as a whole, but none is as large and as lucrative as New York. A tremendous amount of money hangs in the balance: Revenue from the New York market for Airbnb, hotel tax dollars that the attorney general says Airbnb have been costing the state each year, and of course the fees charged by local New Yorkers to generate a source of income from their overnight guests. The top 40 Airbnb hosts in New York have each grossed at least $400,000 over the past three years, for a total of $35 million.

Schneiderman’s concern is that Airbnb can be used as a front for highly profitable illegal businesses that are acting as hotels without paying the taxes or enforcing regulations designed to protect consumers. But Airbnb’s Head of Global Public Policy, David Hantman, points out that 90% of Airbnb’s hosts have only one listing, and it’s for space within their primary residences. The company has said it supports the goal of the 2010 state law, which is to crack down on illegal hotels, and wants to work with Schneiderman to focus on the small subset of hosts using the service this way.

Airbnb also argues that the state should support the service because it is generating a good deal of economic activity for New York City. The company has commissioned an economic study suggesting it has generated $632 million from 419,000 visitors in the state, and more than two-thirds of that sum was money spent on goods and services in outer boroughs, the parts of the city that often don’t have hotels.

Meanwhile, Peers has sprung up to influence the conflict through activism. Its volunteers are mostly members of babysitting collectives, car-share services and home-share programs who possess extreme conviction about the role that regular people play in these new business models. Executive Director Natalie Foster explains the group launched in August “with the idea that the sharing economy movement needed a support center.” (Foster knows something about how to create movements; she worked at the Sierra Club, MoveOn.org, and on Presidential Obama’s digital team.)

But there’s one catch: The organization traces its roots to the sharing economy companies that benefit from its activism. Airbnb hired the creative agency Purpose to help brainstorm plans for the organization. Foster says that Peers doesn’t take donations from the sharing economy companies, but many of the individuals who are investors in — and sometimes executives at — these companies have contributed. Peers has amassed 216,000 members in less than one year.

The New York State judge presiding over the Airbnb case will hear oral arguments in the next month or two. A ruling is expected to be made by January 18.