The pride of St. Louis 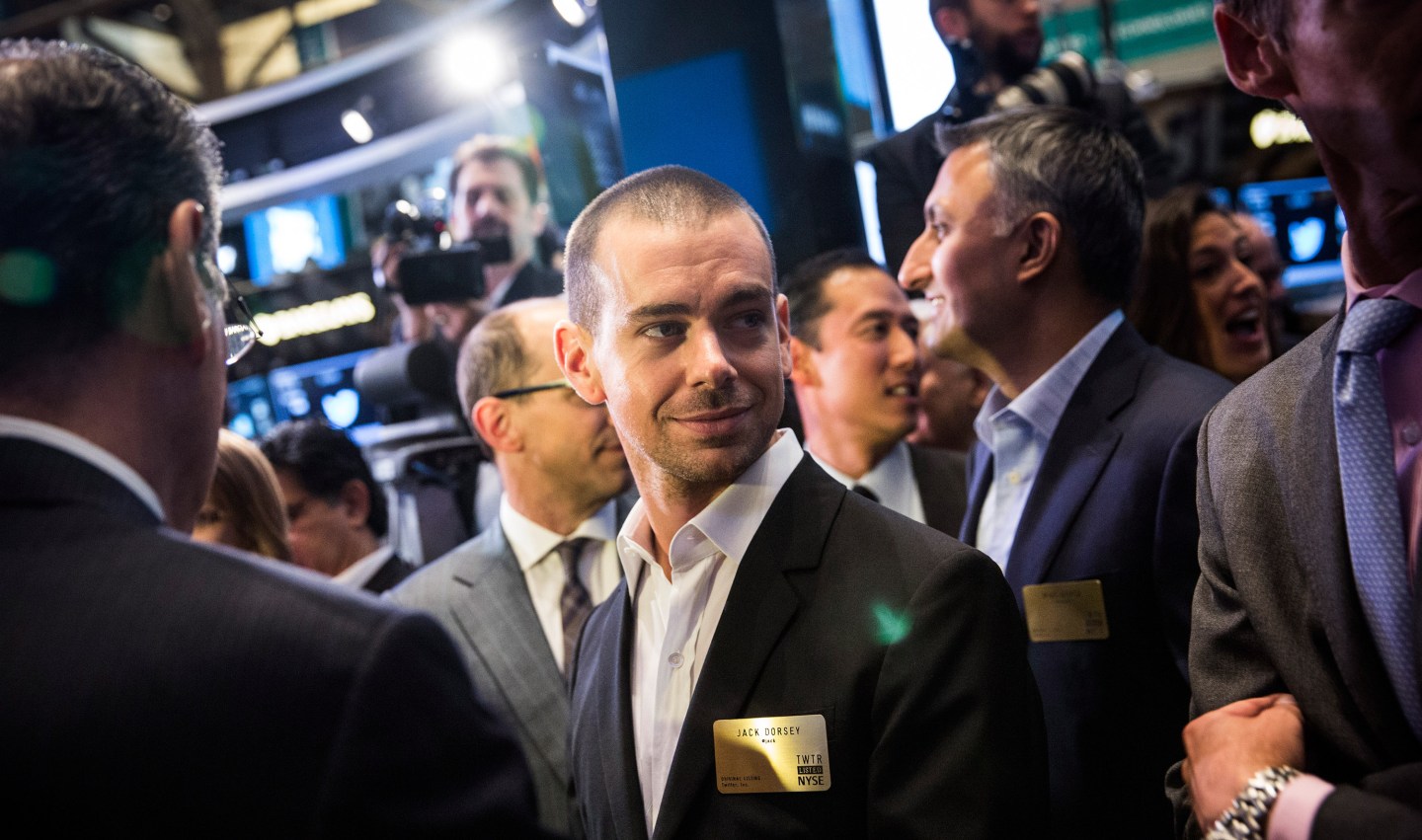 NEW YORK, NY - NOVEMBER 07: Twitter co-founder Jack Dorsey waits to see what Twitter's opening market price will be on the floor of the New York Stock Exchange (NYSE) on November 7, 2013 in New York City. Twitter went public November 7, on the NYSE selling at a market price of $45.10, with the initial price being set at $26 on November 6. (Photo by Andrew Burton/Getty Images)
Andrew Burton—Getty Images

Just two weeks before Twitter announced its much anticipated IPO with a tweet, co-founder Jack Dorsey traveled to St. Louis to plug his other company, mobile-payments startup Square. The entrepreneur of the moment (and No. 2 on this year’s “40 Under 40” list) returned to his hometown to lead a discussion with small-business owners, the first in a nationwide tour of town-hall-style sessions Square is hosting this year. In interviews with Fortune before and after the event, Dorsey stayed mum on Twitter’s IPO plans. But he did answer the audience’s questions on how he’s managed to help launch not one, but two of the hottest companies in tech.

“We’re still taking first steps at Twitter because we want to constantly reinvent the company — we want to rethink what we’re doing,” Dorsey told attendees.

Twitter’s public offering had been rumored for years (and frenziedly, in recent months), but its stealthy September SEC filing generated plenty of excitement nonetheless — which may bode well for the company’s shares. It’s timing ain’t bad either, given the stock market’s sudden affection for social networks — notably, Facebook (FB), which got off to a rocky start when shares debuted in 2012. Dorsey, who will likely join the billionaires club once Twitter goes public, is the company’s executive chairman (and until recently led the effort to bring new features to the service). But his primary day job is running Square, the mobile-payments company he started in 2009. The San Francisco firm (across the street from Twitter) is also rumored to be eyeing the public market, but that’s likely to be a few months out at least. One thing is clear: Both in and out of Silicon Valley, Dorsey’s influence is on the rise.

That’s especially true in his hometown. On a sultry weeknight late in August, more than 500 locals pack into the Casa Loma Ballroom, an antiquated event hall in the city’s once-thriving Cherokee Street neighborhood. They are giving their native son the kind of welcome normally reserved for American Idol finalists. They cheer wildly after the city’s mayor, Francis Slay, introduces Dorsey as “someone that we’re very proud to call a fellow St. Louisan.”

Dorsey’s parents, uncles, and brother beam from the front row of the hall. Even teachers from his alma mater, Bishop DuBourg High School, donning red T-shirts emblazoned with the school name, have come for the welcome. “I’m with Jack!” the crowd seems to be shouting.

Dorsey may not quite be St. Louis’s favorite son — 87-year-old baseball great Joe Garagiola is awfully hard to displace — but at age 36, he has already made one hell of an entrepreneurial splash. Both Twitter and Square have received massive valuations — upwards of $10 billion and $5.5 billion, respectively.

Square enables anyone (from dog sitters to restaurant owners) to accept credit card payments via a small plastic reader that attaches to smartphones; it now processes $15 billion in transactions annually, up from $5 billion in April 2012. And Dorsey is trying to do much more than process credit card payments. He wants to simplify every aspect of the transaction process, from the clunky cash register to accounting software to customer loyalty programs — making it easier for everyone from organic bakers to taxi drivers to ply their trades. As Dorsey tells it, they are the kinds of business owners who will be the linchpin of any economic revival in struggling cities like St. Louis.

“We fundamentally believe that the power of the local economy will help fix the national economy and potentially the global economy,” Dorsey says, sitting in one of his favorite local spots, Sump Coffee, a few hours before his spotlight turn at the Casa Loma Ballroom. “If we have strong networks of people working together to build [local] commerce, it can drive people to want to stay and live in these neighborhoods, and it builds a strong underpinning for the whole nation.”

St. Louis, the proverbial Gateway to the West, was once a hub of commerce and manufacturing. It’s still home to Anheuser-Busch (BUD) and the Nestlé Purina PetCare Co., but many of the city’s big businesses — like shoe manufacturers and meatpackers — have moved out or shut down. “The market area’s labor force has been in almost continuous decline,” says a recent report on the local economy, from PNC Bank’s financial services group. Shuttered factories dot the banks of the Mississippi River, which cuts through the city, and in some neighborhoods, the windows of abandoned red-brick buildings have been boarded up. But Dorsey sees the city on the cusp of revival — and he’s counting on Square’s on-the-ground presence to help.

The company’s traveling series, dubbed “Let’s Talk,” also has more-selfish aspirations, Dorsey admits. For starters, it’s a way for Square to connect with and learn from its demographic. The company will hit five other U.S. cities, including Detroit, New Orleans, and Minneapolis. But St. Louis has special meaning for Dorsey. “It still feels like home,” he says. “My whole family’s here. I’m the only one who left.”

Dorsey’s roots in St. Louis run deep. His family goes back more than six generations (his great-grandmother died in a tornado that devastated the city in 1927). His parents each ran local businesses — including a coffee shop and a pizza parlor — and both his younger brothers still live in the city. His dad, Tim, a friendly fellow with a multibanded ponytail, stumbled upon Sump Coffee several months ago and realized it uses Square to process payments. Dorsey’s parents are regulars now. (They even order milk from a local dairy through Scott Carey, Sump’s owner.) And, naturally, they brought in their son. “When he first came in, I had no idea who he was,” says Carey, a bearded former patent lawyer who has since become close to the Dorsey clan.

Dorsey comes across as unassuming but intense. And he can turn on the charm when he needs to. He has spawned curious fans and followers — a whopping 2.4 million and counting on Twitter — not just for his innovative companies but also because of his eclectic hobbies and interests. (Fun fact: He once studied to become a massage therapist.) He has been compared to Steve Jobs — a premature assessment. But his cachet in the tech world is growing.

That said, Square — like Twitter to this day — has plenty of skeptics. The company won’t say whether it’s profitable, but industry insiders say it’s unlikely, given the company’s rapid expansion. (Nor will Square release revenue figures.) And although Square is growing fast, many of its competitors have deeper pockets and a larger, built-in customer base. For example, Intuit, in Mountain View, Calif., already sells its accounting software, QuickBooks, to more than 5 million small businesses. Dan Wernikoff, senior VP and general manager of the company’s small-business financial-solutions group, says Intuit’s existing ecosystem of products gives it a “strategic advantage” over Square. (Intuit (INTU) also sells a Square-like credit card reader called GoPayment.)

But Dorsey has something many of his competitors don’t — an ability to get people to rally behind him, to believe in his vision, and to buy into the cool factor Square has managed to accumulate. Back in St. Louis’s Casa Loma Ballroom, he confidently kicks off the evening’s panel discussion with a question only another entrepreneur can pose: “Why’d you do it [start your business]? Why’d you put yourself through all that pain?” The sleeves of his blue button-down shirt are rolled up to just below his elbows, politician-style. (Dorsey has made no secret of his interest in politics.)

After the event, people line up to talk to him. Eventually the crowd thins, and he exits the building with the rest of the Square crew and his family — including “Uncle Dan,” a Catholic priest who is also Dorsey’s godfather. It’s 9 p.m. and 86° F outside. The plan? To hit local dessert joint Ted Drewes, which has been making frozen custard since 1929.

“When I was growing up, there was a real feeling of neighborhood,” Dorsey tells me back at Sump Coffee. “But the corner places aren’t talking to the other corner places anymore.”

It’s unlikely Square’s one-off event will move the needle in St. Louis. But for Dorsey, building a community around his company’s products — both in and out of his hometown — isn’t just a do-gooder effort, it’s part of the strategy.