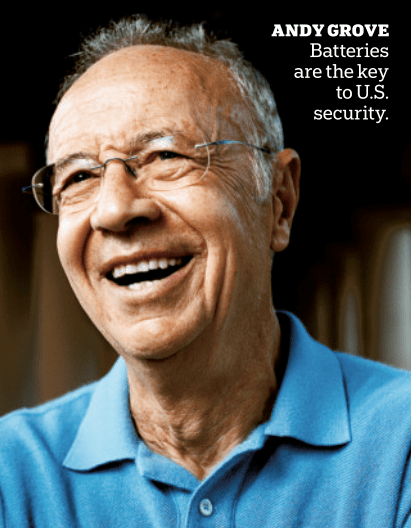 When gas was topping $4 a gallon last summer, the urgency to find alternative sources of energy to power cars and trucks became clear to most Americans. But with oil prices toppling since, the push for new energy technologies is being shoved aside by the nation’s other economic woes. That is a mistake that could cost the United States everything—especially if this recession is followed by a period of fast growth.

Economic growth requires energy. When the world economy starts to grow again, all countries, and especially China and the U.S., will be competing for the same finite supplies of oil and gas. If we had the ability to use varied sources of energy to power transportation, we would have a competitive advantage. We would also have a degree of resilience in the face of threats. And they exist. Just this past year Russia sent tanks into oil-rich Georgia, and an oil tanker was hijacked off the coast of Somalia. In addition, climate change demands that we harness new, renewable sources of energy. Here, too, electricity is key.

The power and efficiency of the internal-combustion engine were at the core of the development of the automobile. In a similar vein, batteries will be a competitive advantage for the automakers of the future. Batteries that go farther than the competition’s and recharge in a shorter time will win. This does not bode well for U.S. auto manufacturers. Battery technology has been the domain of consumer electronics manufacturers, and that industry migrated out of America decades ago. We must bring this important technology back to the U.S., and we must do it quickly to save Detroit.

If we don’t care about our automotive industry, we can let Toyota or Honda build our electric cars, with LG or Panasonic making the batteries. But what if we have only a short time before the oil supply is disrupted? To keep U.S. cars and trucks on the road, we need to do something different—and fast.

Developing a domestic car-battery industry should be the focus of both corporations and the U.S. government. There is a model that may point to the way to build a new battery industry: the early days of the microprocessor. The history of the chip industry is a combination of the private sector overcoming technical challenges, with government playing a supporting role. In 1947 scientists at Bell Labs, which owed its existence to a government-granted monopoly, invented the transistor, the essential ingredient that in time led to the integrated circuit and the microprocessor. Bell Labs licensed the technology to all comers.

As a start, Energy Secretary Steven Chu should organize an industry council—like the World War II Production Board—and run it as if we were under wartime pressure. He can pull in the National Academy of Engineering and the National Science Foundation and have them recommend the technical approach. He can use the National Labs for R&D.

But the critical limitation is going to be battery production. To get an adequate supply of batteries for U.S. automobiles will require new manufacturing capacity that costs billions. Let us create a government-owned foundry organization that supplies, say, the first few million batteries, until the electric car and battery industries reach a critical size. Then let this organization license the manufacturing technology to private companies and let it go out of business.

When the government helped American chip companies, the industry did all right. It hung in as other industries left the U.S., and it still leads globally. We can do the same for transportation. We must.

Andy Grove is the co-founder and former CEO of Intel. He is currently teaching at Stanford’s business school.