‘The thought of it makes my chest hurt’: Many rural families are stuck in an impossible situation, and fixing the childcare crisis is a first step to help them 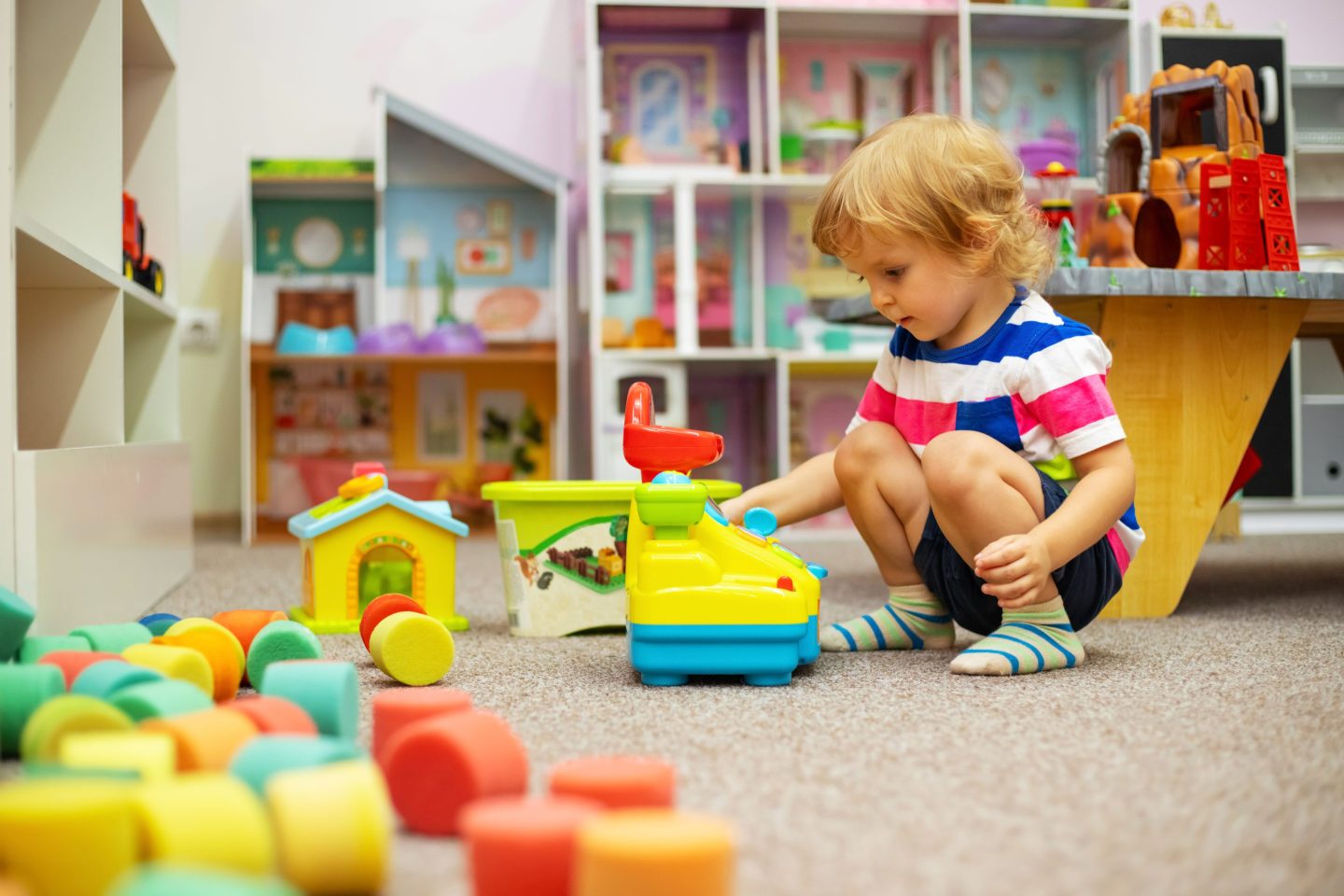 Those who need childcare the most can’t access it.
Andrii Zorii—Getty Images

Breanna Dietrich was on the wait list at a day care before her daughter was even born. Nearly two years later, a slot has yet to open up.

Even if there was an opening at a childcare center in her hometown of Wheeling, W.Va., Dietrich isn’t sure she’d be able to afford it. “I have no idea what I can afford. The thought of that makes my chest hurt,” she tells Fortune.

Dietrich, 36, is now a stay-at-home mother to her blended family of four teenagers and a 17-month-old. Before having her youngest, she worked as a manager at a local outpost of a national pizza chain. But during her pregnancy, she battled health problems—including a heart condition—without any paid sick leave. Six months into her pregnancy, she was forced to quit after her supervisor wouldn’t give her time off when she had to go to the hospital.

Since then, the family has relied solely on the income her husband earns as a utility pole inspector, but they have struggled with rent, food, and bills—especially amid high inflation and the formula shortage earlier this year. “I’m a mom of five, and my husband works, and he works out of town a lot of times, too. So it’s just me. And I am financially not able to work, which sounds crazy.”

Nearly one in three (31%) rural Americans, including 75% of parents, have personally faced at least one type of childcare challenge, according to a new survey shared exclusively with Fortune and conducted by the Save the Children Action Network (SCAN) that polled 1,006 respondents living in rural areas or small towns. Like Dietrich, 11% have had to leave the workforce as a result.

“When you’re in a rural community, and your childcare center closes or when your family provider stops doing that, it’s not like you then have this laundry list of other places to call. Often it’s the only place to call or one of a very small number of places,” Christy Gleason, the executive director of SCAN, tells Fortune.

But many of these parents not only struggle to find available childcare options, they struggle to afford it. “Most people in our area, I will tell you right now, cannot afford $700 or $800 a week [for childcare]. That’s more than my husband makes,” Dietrich says. And while there are free or reduced-fee programs, she says they tend to be full. “I’m not going to pay [the price of] a college education for my child at a year old. I don’t swim in gold coins at night.”

In many rural and small-town communities, childcare centers are more than just a place to drop the kids while parents work, they provide children with basic needs like reliable meals. “Children are experiencing their most stable, reliable, nutritious, balanced meal—so that they can thrive, play, grow, and learn—with their [childcare] provider,” says Mary Beth Salomone Testa, a consultant with Home Grown, a home-based childcare collaborative.

Hunger and childcare issues are interconnected

Half of parents living outside major metros say they are currently struggling to afford to feed their families—compared with 32% of nonparents. And even more are worried about the future with a recession looming on the horizon and continuing economic headwinds. More than three-quarters of parents (77%) worry they might not be able to continue to put enough food on the table ​​over the next year, SCAN’s survey finds.

“The ability to have kids in affordable, quality childcare and early childhood education programs does help alleviate and help address food security issues for kids,” Gleason says. Parents currently utilizing childcare are slightly more likely to say they’re on better footing compared with those who report having childcare issues.

Many childcare centers, day cares, and in-home providers are able to supply meals thanks to federal programs like the Child and Adult Care Food Program (CACFP). The federal policy reimburses centers, family childcare providers, Head Start programs, and even after-school care for providing up to two daily nutritious meals and a snack.

It’s not a perfect program, Testa says, adding that the paperwork and red tape can be difficult for smaller providers to navigate. “It’s not a full reimbursement—it’s pennies on the dollar.” But for participating childcare providers, it does add up and can be as much as $3,000 to $4,000 a year to help cushion providers’ food budget.

“Providers who are not in the program have to face the need to ask families to send in food—families who are also struggling to pay for their own food,” Testa says.

Childcare providers are never going to let a child go hungry when they can do something about it, Testa says. “But they shouldn’t have to do that on their own—and not while not food prices are so high.”

During the pandemic, the USDA provided all family day cares with the higher, temporary reimbursement rate for CACFP, and in July 2022, that was extended through the 2022–23 school year. Congress included $4.7 billion in CACFP funding in the 2023 omnibus appropriations legislation, up from the $4.3 billion in funding allocated in FY 2022, but that’s not likely to make a huge impact given rising food prices.

The funding allocated for FY 2023 reflects that estimated CACFP participation will increase, Testa says. This would be making up for lost participation during COVID, but it could be more especially considering that reimbursements cost more because of the inflation adjustment. She also noted that lawmakers opted not to include funding for reimbursements for an additional meal, a policy change advocates were seeking.

The 2023 budget —which President Joe Biden signed into law on Dec. 29—does include $2.8 billion in new, additional funding for federal early learning and childcare programs, including a 30% increase in Child Care and Development Block Grant (CCDBG) program funding, according to an analysis by nonprofit First Five Years Fund. The CCDBG program is set to receive $8 billion (a $1.8 billion increase over FY 2022), while Head Start and Early Head Start and the Preschool Development Grant Birth Through Five (PDGB5) programs get more modest funding increases, but will have budgets of approximately $12 billion and $315 million for FY 2023, respectively.

“The more we can make affordable childcare available to families, then the more they’re able to look at their budget in a different way, because childcare is such a huge cost driver for families across this country, including in rural communities,” Gleason says.

And every bit helps, says Julie Kashen, director of women’s economic justice and senior fellow at The Century Foundation. “Without that help, then childcare providers are struggling just as much as families are struggling—and the cost of providing childcare is high.”

Funding is happening, but families are still struggling

Although Congress’s recent funding increases are much needed, it may not be enough. Especially given that the over $50 billion in pandemic-era stabilization grant and supplemental CCDBG funds are set to expire in September 2023 and 2024, respectively, though some states are already reporting they’ve run out of money.

That extra aid helped 200,000 childcare providers keep their doors open and serve as many as 9.5 million children over the past couple of years. The grants helped providers cope with soaring operational costs and help recruit and retain staff amid a national shortage. Without those funds, many childcare providers are facing a financial cliff with no real solutions in sight.

“The year-end omnibus was a start in providing some relief on childcare and hunger but not nearly enough to address the scale of the crisis we see in these numbers,” Gleason says.

Moreover, one of the biggest aids for families, the federal enhanced monthly Child Tax Credit (CTC), was not included in the latest end-of-the-year omnibus funding bill. Despite measurably reducing childhood poverty rates and improving American families’ ability to afford basic necessities, the policy has faced an uphill struggle to get renewed.

Research indicates that while the CTC was being paid out monthly, the U.S. experienced its lowest child poverty rates on record, with a full 2.9 million children being affected directly by the policy. As of October, nine months after the last monthly payment was issued, child poverty rates had almost returned to pre-pandemic levels, according to Columbia University’s Center on Poverty and Social Policy.

Gleason agrees, saying at the end of the day, it’s one family budget. And that’s how policymakers need to look at it—and why programs like the monthly Child Tax Credit were so helpful.

“The Child Tax Credit is something that really does sit at the heart of both the food insecurity [and] hunger issue, and the childcare and early childhood education issue,” Gleason says. “The CTC has the ability to put money back into family budgets.”

Having that extra monthly payment has a real-world impact, particularly on the parent who is at the grocery store making hard choices right now amid high inflation. SCAN’s survey found that as a result of high prices, 72% of rural Americans are changing how and what they buy at the store—and of course, some are going without.

“The more that we can address and provide federal investment for childcare, and help expand access to affordable, quality childcare and early education—that has an impact on the family’s budget overall,” Gleason says.

For Dietrich, her ability to get back into the workforce may shift when her daughter is old enough for school—and the family is already beginning to look into preschool options. But that too, is another challenge. While Dietrich says she feels a little sad her baby is growing up so fast, she’s a big believer in the benefits of early childhood education, noting that kids who don’t get that head start experience a “snowball effect” when they are older.

“The people that need the day care the most can’t afford it,” Dietrich says.