They won’t be home for the holidays: why these millennials are saying no to family gatherings and yes to themselves 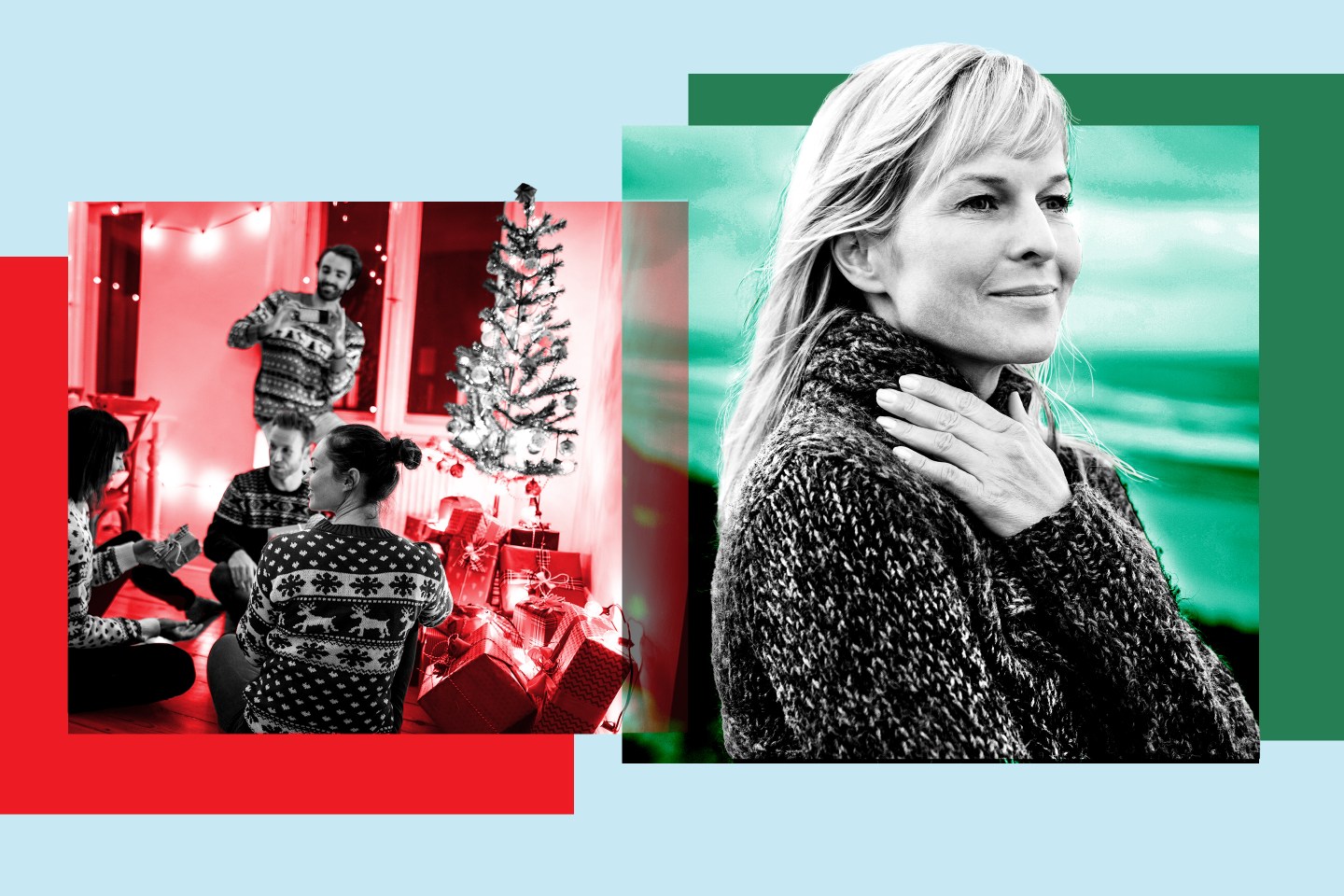 “We, as a society, need to recognize that some people are not feeling joy."
Photo illustration by Fortune; Original photos by Getty Images (2)

Sarah isn’t going home for the holidays. She plans to read, spend time with her dog, and even get in a few yoga sessions.

The 30 year old, who is using her first name to protect her family’s privacy, lives in Seattle, just 30 to 45 minutes away from relatives. Despite the short trek, she enjoyed her own company during Thanksgiving.

“I have more peace being by myself when I need to be,” says Sarah, who made a roast and watched a movie alongside her dog.

It’s become obvious to her over the past few years that she doesn’t share the same values with a lot of her extended family, describing certain moments at past gatherings as “emotionally triggering” and “sad.” A lot of the tension stemmed from politics during the COVID-19 pandemic and election cycles. As much as she wants to focus just on the warm times, pushing herself to go home for the holidays doesn’t feel worth it anymore.

“I just always felt like I was doing it to check a box rather than to relive the childhood memories of what we thought the holidays were,” she says. “It’s so different when you’re an adult.”

Sarah hasn’t been with the maternal side of her family for the holidays in years. At first she felt sad about it and feared she would feel lonely. But by not forcing herself into an emotionally draining situation, she feels more in control.

Going home for the holidays is not feasible for everyone, whether because of financial hardship, to protect emotional well-being, or ongoing mental health struggles.

“We, as a society, need to recognize that some people are not feeling joy,” says Dr. Frank Ghinassi, the CEO and president of Rutgers University Behavioral Health Care and senior vice president of the Behavioral Health and Addiction Service Line at RWJBarnabas Health, who adds that holiday marketing doesn’t help people already struggling. “It highlights the chasm between what the world is expecting and what some people can give.”

A pre-pandemic report from the National Alliance on Mental Illness (NAMI) found 64% of people with a mental illness say holidays make their condition worse. Last year, a poll found people were five times more likely to say their stress increases rather than decreases during the holidays, largely due to the fear of contracting COVID-19, but also searching for and affording presents.

In a survey of over 1,000 American adults, commissioned by BetterHelp in partnership with Material, a research company, 72% said they expect something to negatively impact their well-being this winter, mainly financial troubles, with almost half worried about their mental health this holiday season. More than one in four respondents expect managing family dynamics to negatively impact their well-being this holiday season.

After leaving a childhood home, some people find additional communities, passions, and even a sense of individualism that aligns more with their values, and returning home can cause mental distress by challenging that newfound identity, Ghinassi says.

“When people individuate early and form their adult life, they often leave behind a family dynamic and elements that make them feel less effective. They reinvent themselves in order to feel empowered,” Ghinassi says.

Choosing to skip family for the holidays can seem harsh, but it can actually be a form of self preservation, Sheri Riley, founder of Exponential Living, a personal and professional leadership development company and author of Exponential Living: Stop Spending 100% of Your Time on 10% of Who You Are, tells Fortune.

For Gotham Sharma who lives in New York City, forgoing the holiday season isn’t because of familial distress but a desire to have undistracted time to put his head down and work. The 31-year-old co-founder says a “holiday calendar” doesn’t exist in the startup world. Sharma has found that he can get the most done when he’s not swarmed with meetings which peak during the holiday season. He knows being home with family would ultimately distract him.

“I’m kind of giving up an illusion of attempting to balance these things,” he says.

He fully expects criticism from his relatives, but thinks his family will ultimately understand his decision is because of his passion for business. Especially because he aims to make trips out to see family, who are spread out across the country, during other times of the year that work with his schedule.

“It’s not saying I never want to see you again,” he says. “It’s saying I can’t see you right now.”

Family time is a core tenet in his family, but he says maintaining those relationships and showing respect takes different forms. It doesn’t have to mean showing up during the holiday months, he says, especially if he’ll be distracted and potentially resentful down the road.

And it’s not all or nothing for Sarah either. The one member of Sarah’s family she still stays in contact with is her father, who she describes as her best friend and isn’t associated with her other side of the family. She does plan to see just her Dad for Christmas, and says the door isn’t closed with the rest of her family, but right now, it’s not in her best interest to make the effort.

The internal battle of whether or not to make the trip home is not a simple one.

“Spending time with others, especially when someone is feeling ambivalent about it, can be a complicated mixture of love and avoidance,” Ghinassi says.

He asks people to question their motive: “Is the decision to go home and spend time with family based on a desire to be with them, or based on guilt about being ‘the one who doesn’t go home’? Are you willing to sacrifice some of your own peace of mind in order to not feel guilty or [be] labeled as selfish?”

While the term self-care can induce eye rolls, taking care of yourself means listening to your gut about what you need which can oftentimes allow you to show up in a more authentic way when you do spend time with others.

Looking out for ourselves doesn’t need to look like completely forgoing holiday get-togethers. It can be as simple as when Riley took time alone in her room the morning of a family gathering because she felt burnt out from work and life’s other obligations. After having just a moment to gather herself and slow down, Riley felt less irritable and short tempered when she joined the group. It’s not them or me, she explains, but rather them and me.

To her amazement, no one even noticed she joined the festivities later than usual, Riley says, realizing her people-pleasing nature led her to assume she would be disappointing people by not being holly and jolly at the early birds’ arrivals. She has since chosen to be more intentional about her time, and encourages her clients to do the same.