Skagit Valley, approximately an hour north of Seattle, happens to be one of the world's premier barley growing regions.
BYClay Dillow
August 31, 2019, 11:30 AM UTC 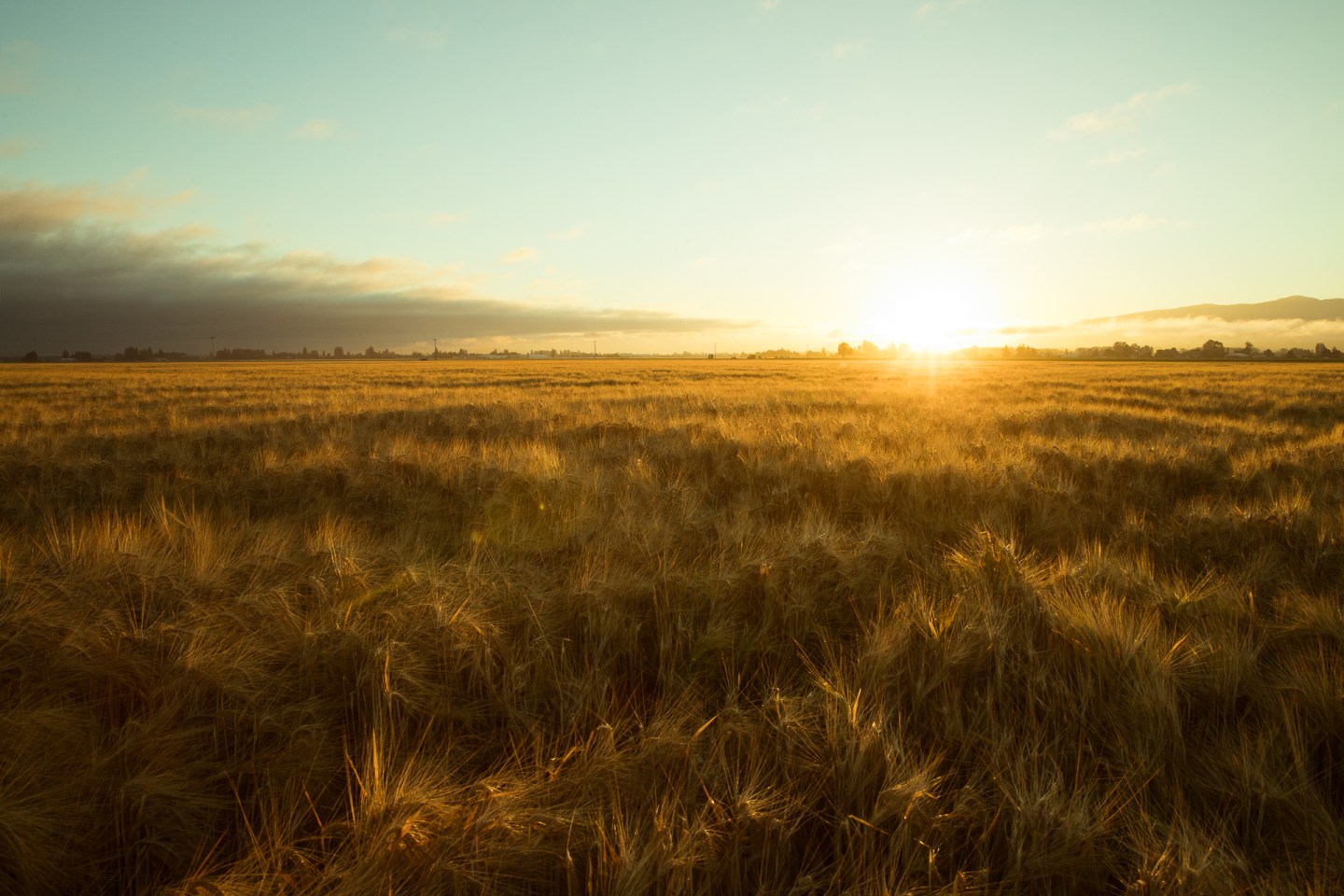 Standing waist deep in a barley field in Washington State’s Skagit Valley, a band of fertile farmland tucked between the mountains and the water an hour’s drive north of Seattle, Steve Hawley is holding forth on the virtues of American single-malt whiskey. We’re here on this increasingly warm July afternoon to talk about barley—not barley generally but this specific barley radiating outward on all sides of us in amber waves of grain—and its role in the four-ingredient formula that makes up a single-malt whiskey.

“We follow all the same rules they do in Scotland: water, yeast, barley, and oak [barrels],” Hawley says. “But to us, the idea that one of those four ingredients doesn’t count is preposterous.”

Unlike their corn-distilling cousins in bourbon country, Westland makes whiskey in a Scottish style, taking advantage of the Pacific Northwest’s ideal barley-growing climate. Its 100% barley-based spirit shares a lot, stylistically, with Scotch whisky, but Westland cofounder and master distiller Matt Hofmann would prefer you not confuse the two. “We are not trying to make a Scottish whisky in Seattle,” Hofmann says. “We’re trying to do something very different, and a lot of that is informed by the culture around us.”

Westland’s entire raison d’être centers on provenance as Hofmann and his colleagues attempt to make single-malt whiskeys that express the unique culture and terroir of the Pacific Northwest. For example, early next month Westland will release the latest edition of its Native Oak Series, a whiskey aged in barrels made from Quercus garryana—or Garry oak—a tree native to the region.

The distillery is in the midst of a multiyear project to produce a peated whiskey using locally sourced peat harvested from a bog on the nearby Olympic Peninsula. (It’s slated for release sometime in the next three years, Hofmann says.) And in June 2020, Westland will release a whiskey distilled from a barley varietal named Alba, one not commonly used in whiskey distillation.

Alba is not alone. Out of as many as 45,000 varietals of barley in the world, the whiskey industry uses just a handful. Most single-malt whiskey makers—including the vast majority of those in Scotland—purchase their malt from just a few big malting operations, which in turn source a specific grain with very particular characteristics (high yield and low cost among them) from farmers.

Farmers, therefore, grow this very specific barley they know they can sell to the malthouses, and the result is essentially a monoculture in which every major distillery is forced by the economics of the industry to use one of a few similar base ingredients. To differentiate their whiskeys they rely on distillation processes and aging techniques rather than raw ingredients. Barley, many distillers agree, doesn’t have a significant impact on flavor.

This is the point Hawley finds preposterous and Hofmann seeks to challenge. Barley absolutely impacts flavor, Hofmann says. The reason many Scotch whisky makers believe it doesn’t has a lot to do with the fact that they’re all using the same malted barley. (Some Scotch whisky makers speak in terms of barley provenance and terroir—Bruichladdich, which is also owned by Westland parent Rémy Cointreau, comes to mind—but they’re few and far between.) And there’s perhaps no better place to test that thesis than in the Skagit Valley.

“This is one of the best barley-growing regions on earth,” Hofmann says. “Honestly, the unpleasant little secret is that this is probably a better barley-growing climate than Scotland is, all told. And barley is where it all starts.”

Barley innovation has been part of Westland’s DNA since Hofmann and cofounder Emerson Lamb launched the company in 2010. Hofmann started experimenting with Westland’s house style from the very first distillations, using an unconventional blend of five different malted barleys and a Belgian brewers’ yeast for fermentation, the latter inspired by the Pacific Northwest’s robust brewery culture. Lamb eventually left, and Rémy Cointreau came aboard in 2016. But Hofmann’s most important partnerships have arguably been the ones he’s established in the Skagit Valley, where a group of farmers, maltsters, and geneticists have coalesced around his vision.

“We believe flavors can come through,” says Steve Jones, director of Washington State University’s Bread Lab, a hybrid science lab and test kitchen devoted to the research and application of new wheat, barley, and other small grain varietals. “We know they do in breads and other things, but are they coming through in whiskey? We’re proving it right now.”

At the Bread Lab, Jones and his students are engaged in a long-term barley evaluation and breeding program for Westland, seeking out barley varietals with promising flavor nuances and, in some cases, selectively breeding them to boost yield, hardiness, and disease resistance. Meanwhile several farmers have partnered to cultivate some of Jones and Westland’s experimental barley varietals. (These farmers need to rotate grains like barley into their fields to restore their soil, but typically make very little money for their trouble; most becomes animal feed.)

And a malting house—Skagit Valley Malting—has developed proprietary malting technologies in part to serve the highly specific, small-batch needs of Westland and other small brewers and distillers in the region. In both cases, Hofmann and company had to convince partners working in yield-centric industries that gross output would need to take a back seat to flavor and quality. They agreed.

Westland’s Cantilever Room is a space for exploration, learning, and enjoyment.
Westland Distillery

Westland now has 15 different whiskeys aging in the barrel distilled from unconventional or new barley varietals, many of them developed by Jones and the Bread Lab. (Some others were bred elsewhere but never widely used.) A full 40% of the spirits coming off Westland’s two stills is part of one or more of these experiments, a massive proportion by any industry norm. Eventually that will make for a whole lot of Westland whiskeys in a whole lot of iterations, much of it untested in the marketplace. But Hofmann is confident that he and Westland’s whiskeys are positioned right where they need to be.

“I think people are seeking out real things with connection to provenance in every aspect of their lives, and whiskey is just now beginning to make that change,” he says. “Fifteen years ago, it would be a very different story. But we feel like we’re right on the cusp of delivering something to a culture that’s changing very rapidly, and we do feel like we’re at the right place at the right time.”