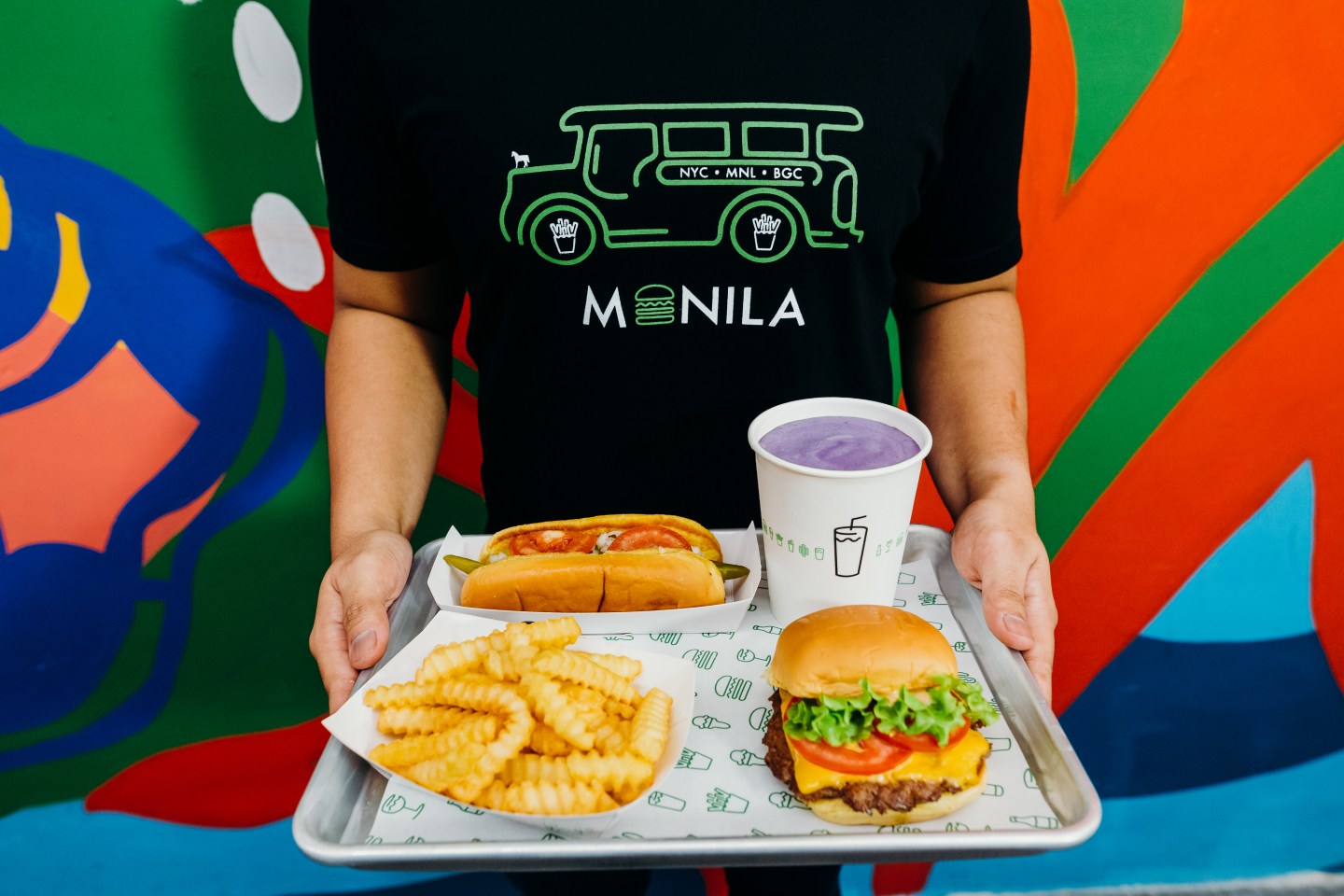 The Shack Burger with fries and an ube milkshake at the new Shack Shack in Manila.
Kristyn Clark

One of the keys to Shake Shack’s supernova success has been the consistency of its menu and food as the burger joint scaled from a single stand in New York City’s Madison Square Park to an international chain with over 250 locations in more than a dozen countries.

But another key to Shake Shack’s success in those new markets is knowing how to read the room and catering to what the locals want.

Shake Shack’s culinary director, Mark Rosati, travels the world routinely, researching flavors for creating new menu items. When Shake Shack prepares to enter a new market, Rosati first eats at many of the local fine-dining—or at least foodie-minded—restaurants in town, seeking inspiration for a new spin on the Shake Shack menu in that market.

“What I try to do primarily is find ways of connecting that Shack or that city with the culinary culture that’s already there,” says Rosati. “Part of the job is to make sure that the burger as people know from the New York City area is the same in those cities or countries.”

A trio of Shake Shack concretes—frozen custard—at the new location in Manila, which opened this year.
Kristyn Clark

Among Shake Shack’s most recent expansions this year were new locations in Manila, Singapore, and Mexico City. In Manila, you can pick up a calamansi limeade you won’t be able to find anywhere else; in Singapore, look for a coconut-and-pandan-leaf beverage that was reportedly a hit with local tastemakers; and in Mexico City, you can order a concrete (the chain’s term for dense frozen custard with mix-ins) with flavors of candied lemon, spice cookies, and local mamey fruit—a dessert developed by Elena Reygadas of the CDMX hotspot Rosetta.

“That’s how I start to kind of understand their dining scene: Try street food to the fine dining and everything in between—little bakeries, the classic old ones like mom-and-pop shops—to see what the young kids are doing,” Rosati says. “And through that I start to see what my own identity would be like in that city. We’ve done this pretty much everywhere we’ve gone.”

Rosati joined Shake Shack in 2007 in the days of the solo location at Madison Square Park, which still sees lines filled with local residents and workers as well as tourists alike. He’s seen the company’s employee base scale astronomically and simultaneously, but he goes back to the theme of consistency as to why Shake Shack has been able to avoid many of the growing pains experienced by small companies that hit it big. That consistency ranges from the same training materials used at every location and office to the same basic ingredients needed to put out food each day.

“We have a very large training team and a very large supply-chain team,” Rosati says. “They are the ones that do all that paperwork, set up all the vendors, catalog all the items, and put together little information packets so the opening location may know where to order that chocolate from and how it comes.”

While stressing that the Shack Burger and fries—Shake Shack staples—are expected to (and therefore, need to) taste the same everywhere, Rosati adds that there is still room to play with and tweak the menu to reflect the local culinary community in each new city. One way Shake Shack has gone about this is through burger and milkshake collaborations with local chefs and restaurants. True to the company’s New York City heritage, Shake Shack’s first few collaborations included a chocolate chip cookie with Manhattan’s beloved Levain Bakery.

Beyond the tristate area, Shake Shack has been working with artisanal brands like craft chocolate maker Ritual Chocolate in Utah and acclaimed chefs such as Danny Yip, the elusive owner behind Hong Kong’s Michelin Guide–reviewed The Chairman restaurant.

“The whole way of going about it, I want it to feel organic,” Rosati says about reaching out to chefs for collaborative projects. “I always like to approach people I know so it’s more of a friendly way of working together. We’ve never cold-called anyone.”

Rosati came across Yip’s food through a recommendation by a friend, and after declaring it the best Cantonese cuisine he had ever sampled, Rosati reached out to Yip for a meeting. Yip replied cordially, but he wasn’t entirely interested in the American fast-casual chain.

“We sat down and I told him, ‘Our whole ethos and how we try to work locally and like I said: Here are the ingredients and bakeries we’re using in your city and also some other ones that might be a little more high profile around the world,’” Rosati says of sitting down with Yip to pitch him about working on a custom Shake Shack burger. “And he goes, ‘Well, again, I don’t do this sort of thing. I worked with one restaurant a few years ago, and I’m actually working with one this year. It’s a restaurant in Japan called Den. The chef, Zaiyu, is a friend.’”

It just so happens Shake Shack had done a burger with Zaiyu three years prior to celebrate the company’s first anniversary in Tokyo. Suffice it to say, the conversation picked up from there, and the pairing ended up in a limited-edition, umami-packed Shack burger featuring Szechuan pepper, a fermented black bean sauce, and a thinly sliced and griddled ox tongue, slow braised in a Chinese five-spice.

“I wanted him to feel comfortable, and I gave him complete carte blanche,” Rosati says. “And anytime I work with a chef, I kind of want that to happen. I don’t want them to feel like they have to fit in a box. I want them to dream. And the way I do that is kind of give a little bit of guardrails and say, ‘You know, if you use our burger and our bun, whatever else you want to do. Hell, we can even maybe talk about a different burger and maybe a different bun.’”

Inside Shake Shack’s Innovation Kitchen, the company’s home for research and development. On the table are fruits and veggies picked up from a local farmers’ market, which will go into special menu items served only at the West Village location upstairs.
Shake Shack

Some of those collaborations have come home—namely a black sesame milkshake that originated in Japan. When it came to New York, Shake Shack sold more than 700 units in one day. (Rosati says that shake is a favorite of cofounder Danny Meyer and CEO Randy Garutti.)

Of course, not all experiments turn out successful results.

For one, Shake Shack had actually released a similar black sesame milkshake years prior to opening in Japan, which Rosati jokes might have been “a little ahead of its time.” Incorporating black sesame and citrus (orange zest, lemon zest, and lime zest), the team called it “Grey Matter,” which they thought was kind of fun and cool—but it didn’t sell as many units as its successor.

“I think there is a little bit of excitement, and people are curious to try something new,” Rosati says. “If it’s photogenic, too, I think that’s really going to make it even that much more like, ‘I need to do this and film that moment.’” Most likely, Grey Matter wasn’t all that photogenic.

A new fan at the Shake Shack opening in Singapore this year.
Kristyn Clark

Another learning experience took place in Dubai. Rosati and his team observed that juice bars are very popular in the region, so they set about drafting a menu of juices, date-based shakes, and mocktails. It should be noted here that Shake Shack’s local consultants are critical to introducing Shake Shack to a new audience. In this case, the local fixer possibly helped the U.S.-based team avert an expensive mistake.

“He says to me, ‘This is great, man. This menu you created is great. I love the juices, I love the dates. But we don’t need this. Like, we know dates. We can make amazing pastries, savory items with dates. We have this whole juice thing down. We do this. We can’t make burgers. We don’t know how to do that. The milkshakes and fries, like that’s what you guys do and that’s probably why we want you to be here. Just come in, be yourself. People are going to come because this is really good stuff. We don’t know this stuff. We can’t do this, and you guys are the best,’” Rosati recalls.

It was at that point, Rosati says, that a light went off in his mind, denoting he was getting caught up in the local scenes because he found them exciting. At the same time, that excitement deviated from Shake Shack’s core mission. “Maybe that menu for Dubai was a little ambitious, but we still do stuff with dates. It’s just a little more restrained,” Rosati says. “We also had to realize that we are an American-inspired modern-day roadside burger stand.”

—Vancouver is a haven for cheap but delicious tasting menus
—Vietnamese egg coffee is taking North America by storm–but what is it?
—Why Charleston’s food scene is stronger than ever right now
—Foraging for high-end meals on Dominica, the Caribbean’s best-kept secret
—Listen to our new audio briefing, Fortune 500 Daily
Follow Fortune on Flipboard to stay up-to-date on the latest news and analysis