Restaurant Review: The New Chef at New York’s Famed Gotham Bar and Grill Is Tearing Up the Old Menu and Starting Fresh 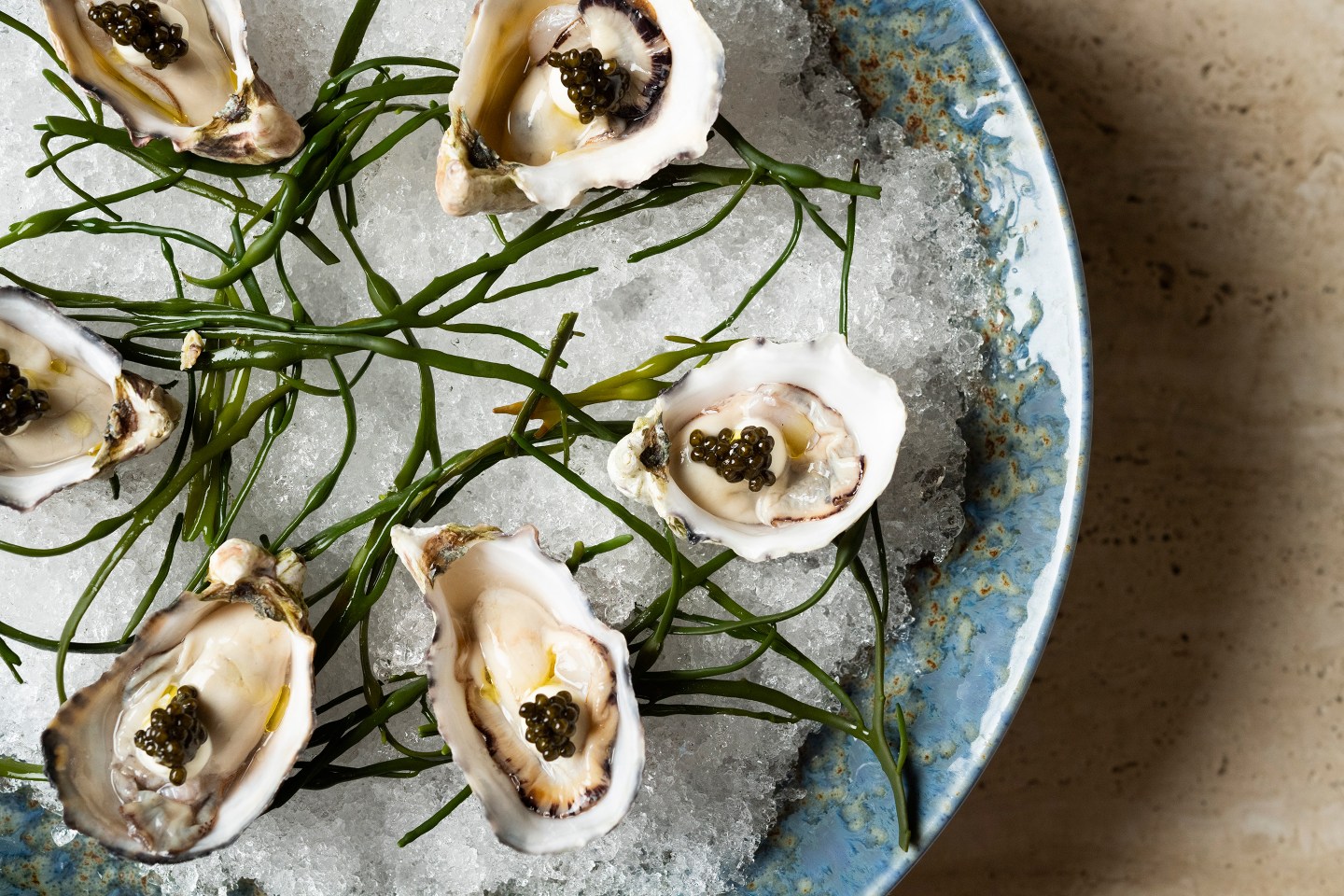 In 2011, the New York Times reviewed Gotham Bar and Grill, debonair broker of power meals near Union Square since 1984, for the fourth time. Then-critic Sam Sifton started in on chef Alfred Portale’s shrimp-and-tomato risotto, saying the dish “would not have been out of place at a pop-up restaurant in some corner of Bushwick, Brooklyn, served by a bearish kitchen poet with a rutabaga tattoo on his forearm.”

So much has changed since then. About food, about everything. But in 2011, the union of rice, tomato, shrimp, bacon, and arugula was “a combination [that] tasted absolutely of now.”

So what does now-now taste like, in the gloaming of 2019?

Ground cherries, their papery husks upturned like capes caught in the wind, dipped in tongue-twisting tamarind jam. A quenelle of maple-kombu butter as smooth as shaving cream. A molded square of foie gras, covered with a shield of truffle-and-seaweed gelée and cut diagonally, like a sandwich. And for making an actual sandwich, seaweed brioche. It tastes, briefly, of the superficial richness of a house-of-cards economy, contrasted with sobering but resolute swells of bitterness, sourness, umami. It tastes like it’s ready for a fight.

This dish’s creator, Victoria Blamey, is. When she replaced Portale last summer, becoming Gotham’s first new chef in 34 years, she knew she was inheriting a legacy. “The first thing I did was nothing,” she says, taking a month to absorb the restaurant’s dynamics. Then she cleaned house.

Blamey grew up in Santiago, Chile, studied history, and cooked as a hobby. “Eventually I realized history could be my hobby and cooking could be my career,” she says. She cooked in England, Australia, Brazil, and in New York at Corton, Atera, and Il Buco Alimentari before landing her first executive chef position at the creaky West Village tavern, Chumley’s, which Pete Wells at the Times called “emphatically worth going to as long as Ms. Blamey remains content to work in that kitchen.” Content she was, but wound up parting ways in late 2017—not, she claims, her decision. “I felt like something was taken away from me. I felt that someone cut off my wings.”

Blamey spent a year and change in the pop-up and event circuit, pitching in at Il Buco, and traveling. When a headhunter contacted her about Gotham, she was in Chile visiting her mother and recovering from an unexpected thyroid surgery. “I obviously knew about Gotham, but I had never been,” she says. “The problem and the excitement of New York is that you have so many restaurants opening, you don’t really pay attention to other things around you. [Gotham] is not on your radar.”

Is it on anyone’s now, now that Blamey has stripped the menu to the studs, sparing not even the sacred seafood salad that was praised in each of Gotham’s Times reviews? The food is certainly more current, informed by a pantry that’s equally representative of Japan, Mexico, and India as it is the Union Square Greenmarket. “I don’t know why people struggle so much [the question of] what’s American food,” Blamey says. “It’s a country of immigrants, so how can the food not be diverse?”

Chiles from the Caribbean, Italy, and Brazil light excited little fires up and down the menu. Seaweed washes up often. Blamey is not afraid to get weird. Though not lacking in luxury ingredients, it’s hard to imagine that foie dish on an old Gotham menu. Like the Addams Family, it’s pleasurably strange, which still means just plain strange to some.

Her oysters are illusions. Nestled into crushed ice, the deep-cupped Eld Inlets from Washington State look like your standard half-dozen, but when you tip one back you’re blasted with a surprise: The oysters are pickled, in a seaweed-and-Chardonnay vinegar brine that turns the wiggly muscles as taut and plump as mozzarella balls. The texture is fantastic, the acid incredible, then comes subtle coating of white chocolate-and-cauliflower puree, followed by salty detonation of white sturgeon caviar crushed between your teeth. These are oysters to chew on, not slurp down.

Chanterelles are another pickled prize. Blamey camouflages the supermodel mushrooms in a heap of creamy roasted eggplant; they’re shooting stars of acid. Rounded out with soft, sweet tomatoes, Sea Island red peas, and smoky lapsang souchong tea broth, the dish (vegan, by the way) isn’t much to look at but the flavors are fully developed.

Blamey was a vegetarian for seven years, and her affection for vegetables shows in each fungus and nightshade and legume. When a fillet of madai (Japanese bream) shows up with moist flesh but flabby skin, I find myself pushing the fish aside to feast on the plump Scarlet Runner beans mingling with sweet green tomato jam and Poblano peppers in smoked tomato jus. I like the glazed lamb duo of shoulder and collar, but I love the accompanying wedges of roasted Kabocha squash, wrinkly charred Jimmy Nardello peppers, and fearsome Calabrian chile sauce. These dishes aren’t perfect, but they take risks.

Gotham’s owners—Jerry Kretchmer, Jeff Bliss, Richard and Robert Rathe, and managing partner Bret Csencitz—may be taking an even bigger risk. You can’t torch a treasured menu without upsetting some regulars, though on the night I’m there, the dining room and bar winds up swelling to capacity.

I arrive just as Gotham opens for dinner service, on time for my reservation. The host curtly informs me they’re not ready to seat yet. Behind her, the army of staff in the rear of the restaurant appears to still be in its pre-shift meeting. The host explains I can go to the bar, where I might order a spicy tequila or mezcal cocktail or a glass of Julien Guillot’s Big Trouble in Little Chenas, a delicious Beaujolais boombox off wine director Josh Lit’s new section of natural wines. I want to save my drinking for the table, so I opt for the sidelines, where I’m ignored for 13 minutes. I sit in the corner and contemplate my millennial role in killing the power lunch.

I also study the museum-like space—its grand bar, its soaring ceilings, its stretch limo of a banquette, its main dining room sunken like a massive midcentury conversation pit. “Fabric chandeliers billow beneath soaring ceilings,” Sifton wrote in 2011. They still do. “Elaborate flowers are everywhere.” They still are. “People dress for dinner and are escorted past marvelous photographs on the way to their tables. It is all very civilized there.” Time seems to have stood still here, as it has for many of the diners. Death becomes her dinner.

When my guest, an editor at a well-known food magazine, arrives, the frosty service melts and becomes as fawning as a White House cabinet member. Fortunately, our server can read a table and lowers the temperature. She’s conversational, smart, and capable. She joins in with our laughter after she tells us about a special, an $85 16-ounce dry-aged rib-eye—“for one.”

Gotham’s prices are an added layer of insulation from the hoi polloi, with $19 salad and $26 crudo to start followed by entrees that begin at a not-unreasonable $27 for black spaghetti with octopus ragu (over-salted) but quickly climb into the $30s, $40s and beyond. Regardless, dessert is a non-negotiable expense. Pastry Chef Ron Paprocki, who’s been at Gotham since 2012, interprets Blamey’s mandate by placing unexpected flavors in classic contexts. The citrus tart jettisons the usual lemon or key lime filling for sharp, floral camalansi curd. It’s bounded in shortbread crust and decorated with piped makrut lime meringue. (Unlike some more woke restaurants, Gotham uses this lime’s other name, a racial slur in South Africa.) Ice cream infused with Thai curry aromatics (lemongrass, ginger, cilantro) pairs perfectly. There’s an otherworldly peach soufflé the coral-pink shade of a Palm Beach apartment. Its hi-def orchard flavor is as impressive as its stability. Rising two full inches above the rim of its cup, the soufflé supports a scoop of tangy goat’s milk yogurt ice cream even as we attack its airy interior with little spoons.

Served in a copper pan, the tarte tatin is the lone stowaway from Gotham’s past. As it’s always been an off-menu special, Blamey spared it, fortunate for us. Smothered in dark caramel, the globes of tender Gala apples and brace of puffy pastry makes for a delectable, almost subversive, conclusion.

The restaurant itself does not feel subversive, the way it may have in the past. “In a city obsessed with the shiny and novel, Gotham Bar and Grill is an outlier,” Sifton wrote. That distinction is dead, now that the backlash against bacon and Brooklyn and backless barstools has begat a traffic jam of cheese trolleys and Caesar salad carts in New York City and beyond. To be sure, cracks in the fine dining renaissance will follow cracks in the emperor’s new economy, but until Occupy Hudson Yards takes root and we’re all subsisting on artisanal pickles again, Gotham will be just another restaurant, trying to get in on the conversation. Blamey’s voice, clear and tenacious, may make the difference. “The challenge,” she says, “is what excites me.”