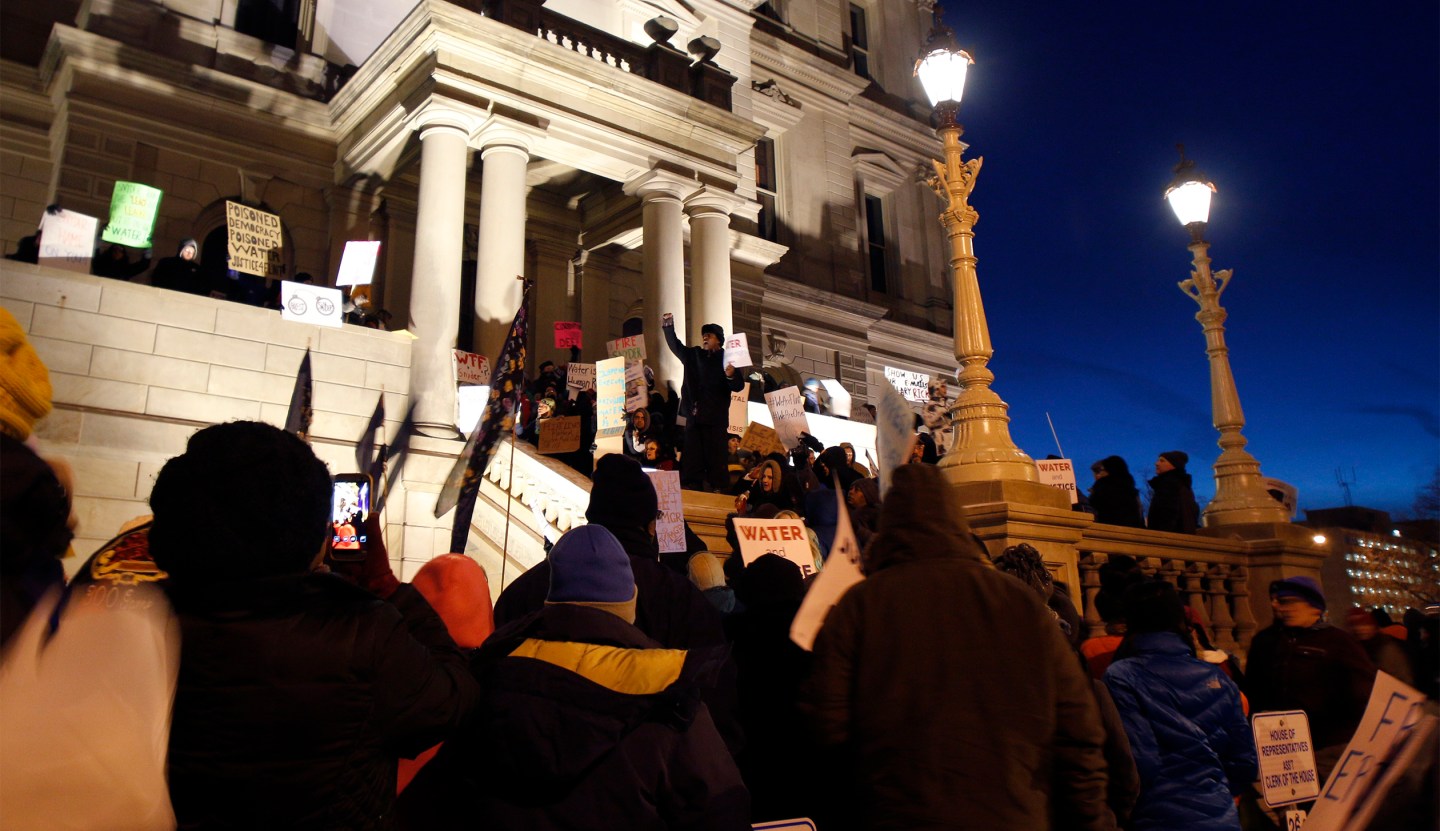 Protesters gather outside the state Capitol before Michigan Gov. Rick Snyder's State of the State address, Tuesday, Jan. 19, 2016, in Lansing, Mich. With the water crisis gripping Flint threatening to overshadow nearly everything else he has accomplished, the Republican governor again pledged a fix Tuesday night during his annual State of the State speech. (AP Photo/Al Goldis)
Photograph by Al Goldis — AP

In Michigan Gov. Rick Snyder’s State of the State speech Tuesday night, the self-proclaimed nerd laid out the facts of the ongoing crisis that led to the lead poisoning of one of Michigan’s largest cities.

Snyder placed primary blame at the feet of the state’s Department of Environmental Quality, the agency responsible for ensuring the safety of the water supply when Flint disconnected from the Detroit Water Authority and began to draw from the Flint River for the first time. “Government failed you at the federal, state, and local level,” Snyder said. “We need to make sure that this never happens again in any Michigan city.”

But at the time that Flint flipped the switch in April 2014 to send the river’s highly corrosive water through lead pipes, the predominantly African-American city didn’t have a working local government. And as the crisis unfolded, with Flint residents flooding city meetings waving plastic bottles of urine-colored tap water, it was state officials who told them to “relax.”

One year later, and more than six months before Governor Rick Snyder intervened to reconnect Flint to the Detroit water system in October 2015, the Flint City Council had voted to “do all things necessary” to do so. The problem was that their vote was merely symbolic: the city was under the control of a state-appointed emergency manager, who said the council’s vote to rejoin the system to the tune of $12 million per year was “incomprehensible.”

It would take two external scientific studies, whistleblowers, and a doubling in the number of children with elevated lead levels in their blood before the City Council’s vote was honored.

Five years ago, Snyder signed legislation that expanded the reasons why the state could choose to appoint a municipal emergency manager, then granted those appointees almost complete power over their assigned municipalities. Under Public Act 4, as it was called, state-appointed emergency managers could break collective bargaining agreements, fire elected officials and determine their salaries, and privatize or sell public assets.”We can’t stand by and watch schools fail, water shut off, or police protection disappear,” the governor said in a statement defending the emergency management law. “Without the emergency manager law, there is precious little that can be done to prevent those kinds of nightmare scenarios. But with it, we can take positive action on behalf of the people to quickly avert a crisis.”

Emergency management is a way to short-circuit democracy when a city faces financial insolvency, with the idea that a leader free from accountability to voters can make unpopular but necessary decisions. But Michigan voters rejected that law in a state-wide referendum, as many unions and civil rights groups raised alarm that this new breed of emergency managers could break union contracts and usurp local governance. A month later, the state legislature passed a replacement law that made minor adjustments and one major one: an appropriation banning a referendum on the new law. That was 2012.

By 2013, six Michigan cities—and almost half of the state’s African-American population—were under emergency management. In many of these cities, public services were pared down to the minimum. Pontiac’s emergency manager whittled the city’s employees to around 10% of their previous number, outsourcing almost every city service down to its cemetery workers. In an exit interview with Michigan Radio before the Flint water crisis reached its zenith, Flint’s fourth and final emergency manager, Jerry Ambrose, reflected on the limited city that emergency managers had left behind. “There’s just a point in time there’s just not enough gas in the tank. There’s just not enough revenue from the local taxpayers to solve the problems that are here,” he said. “Whether the city’s here or not, people will be here. And they’re going to have some basic needs that have to be met, one way or another.”

Critics of the emergency manager law have long protested that the appointees cut services to realize short-term savings, with little eye to the long-term structural problems the cities face. “The assertion is that these are cities that are running deficits because the elected governments are not capable of keeping spending under control. The problem from my perspective is that these really are structural deficits…It’s almost impossible for anyone to solve these problems,” says Peter Hammer, a law professor at Wayne State University and a director of the school’s civil rights center. Structural problems like the fact that 40% of Flint’s residents live in poverty—presenting an impossible tax base for the city to draw upon—go unanswered.

That short-term budget logic is exemplified by the decision that led Flint to switch its water supply. Sourcing from the Detroit Water and Sewerage Department was expensive, and though Flint planned to join a cheaper regional water authority, that infrastructure wouldn’t be completed for a few years. So, under emergency manager Darnell Earley, Flint turned to the Flint River—a notoriously polluted nearby tributary—as a temporary solution that was projected to save the city $5 million in just two years.

More than 150 protesters from Flint and Detroit chant in solidarity in the main lobby, asking for the resignation of Gov. Rick Snyder in relation to Flint’s water crisis on Thursday, Jan. 14, 2016 at the Capitol in Lansing, Mich.Photograph by Jake May — AP

City officials initially supported the move to the Flint River water supply; in fact, it was then-mayor Dayne Walling who pushed the symbolic button to disconnect from Detroit. (Walling would later say that he privately disagreed with the plan, but decided to publicly endorse it after the emergency manager decided.) But detractors of the law say that the lack of democracy in Flint prevented the city from making careful decisions. “When you remove all democracy, it’s a system set up for failure, where they’re not accountable to the people that they’re serving,” Progress Michigan’s executive director Lonnie Scott says. “Their sole focus is the bottom line.”

Without the checks and balances present in a democratically-elected government, the emergency manager was able to make unilateral decisions. “Having one person as the decision maker, the idea is that you can get things done quickly and efficiently, but most of these emergency managers are people like city managers and financial experts,” says Eric Scorsone, the founding director of the Michigan State University Extension Center for State and Local Government Policy. “They don’t have the expertise they need. They aren’t civil engineers, and they aren’t health experts. You need to have other voices in the room.” Scoresone said that emergency managers need to work with other state agencies to bring holistic change to the cities under their care—not just cost cutting.

In October, Earley, Flint’s former financial manager, wrote an op-ed in The Detroit News defending his innocence in the water crisis. “The mayor’s approval of the plan and the subsequent near unanimous vote by City Council were in no way coerced, forced or demanded by the state, nor any emergency manager,” he wrote. That’s true: Flint’s decision to join the regional water authority was supported by city officials. But the decision to pursue the Flint River as a temporary source seems to have been set into motion by Earley’s predecessor, Edward Kurtz.

A Pastor holds up a bottle of Flint water as Michigan State Police hold a barrier to keep protesters out of the Romney Building, where Gov. Rick Snyder’s office resides on Thursday, Jan. 14, 2016, in Lansing, Mich.Photograph by Jake May — The Flint Journal-MLive.com via AP Images

Says Wayne State University law professor Laura Bartell: “There is plenty of blame to go around for the Flint water situation, and the former emergency manager bears some of that blame. But city councils also make mistakes, some of them very bad mistakes. People are fallible, and leaders are fallible, especially when they operate in a financially troubled city.”

Emergency managers have an undeniably difficult job. Some critics, like Hammer, say it’s impossible. But some in Michigan are calling for the state to rethink how much control emergency managers should have. Maybe, says Scoresone, emergency managers’ roles should be reduced back pre-Public Act 4 levels, where their power is still checked by local governments. “Flint is the real threshold here: it’s a game-changer to the concept of emergency management,” says Hammer.

In Snyder’s speech Tuesday night, he spoke of one other problem in Michigan besides Flint: Detroit’s Public Schools, where teacher shortages, dilapidated buildings and enormous deficits have led to teacher protests. Both problems in Southeastern Michigan spiraled out of control under state-appointed emergency managers. The Detroit Public Schools’ current emergency manager? Darnell Earley, the man who once ran Flint.

For more on Fortune’s coverage of the water crisis in Flint, check out the following stories:

The Water in Flint, Michigan Has Poisoned Children

Celebrities Are Speaking Out About the Flint Water Crisis