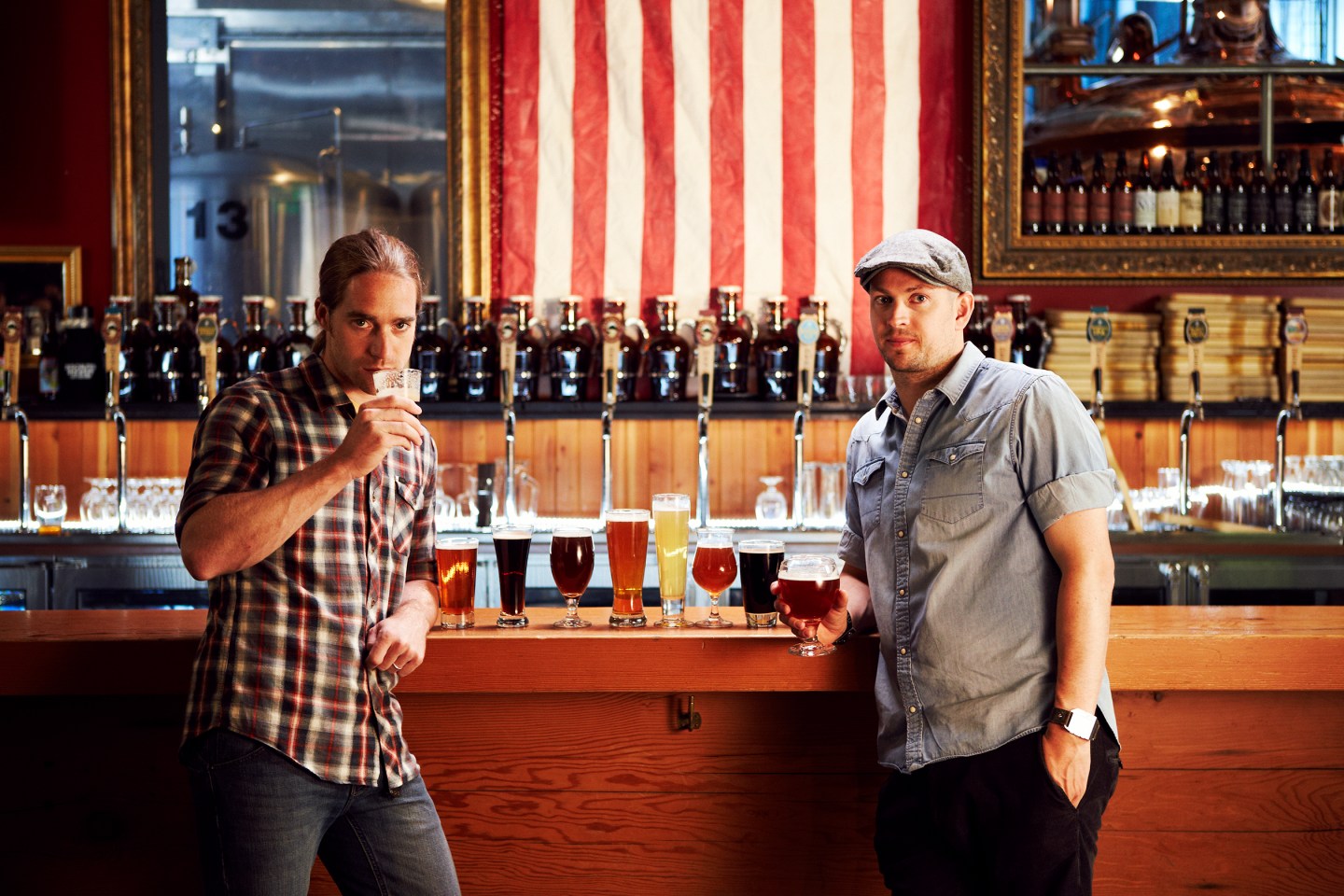 Invasion of the Punks

Brewdog is an oxymoron: A small craft brewer seeking to become a global presence. Can the Scottish company find a niche in the U.S., where craft-beer lovers prize local roots?

Even when things are going pretty smoothly for BrewDog cofounder James Watt, the 34-year-old Scotsman seems to be a magnet for controversy. Upon returning home in October from a U.S. business trip, the craft-beer impresario got hit with a cease and desist letter. It was for a fight Watt didn’t even remember picking, involving Elvis Presley.

It was a bit of a buzzkill. Back at BrewDog global headquarters in Ellon, in northeast Scotland, Watt had lawyers breathing down his neck from Authentic Brands Group, a trademark firm that owns the intellectual-property rights to more than two dozen fashion brands and celebrities, from Frederick’s of Hollywood to The King.

ABG demanded that BrewDog stop using the late performer’s name to market one of its bestselling craft beers, a potent blood-orange-and-grapefruit-infused IPA called Elvis Juice. Watt and his cofounder, Martin Dickie, who have been friends since childhood, were hardly all shook up.

They devised a plan to spin the bad news into free publicity. To protect against the infringement claim, they legally changed their first names to Elvis. The renamed Elvis Watt and Elvis Dickie tried to get all 650 BrewDog staffers to do so too, but, alas, got no takers. They also took a swipe at one of their favorite punching bags, Budweiser parent Anheuser-Busch InBev, the $216 billion colossus, which uses another word closely associated with Presley. Why not, they suggested in a blog post, go after Bud for calling itself the “King” of beers?

Preparing to drop stuffed cats into London’s financial district to celebrate raising money from fans rather than “fat-cat bankers.”Courtesy of BrewDog

It was a classic BrewDog move. Changing their first names may have been a dubious legal tactic, but the duo succeeded in getting in a very public jab at the suits who sought to shut them down, while reinforcing their underdog appeal with fans, or “punks,” as they affectionately call them. They managed to score some free publicity, and their moves lit up Twitter for a few weeks. “We quite like it when our backs are up against a wall,” Watt says, “and we have to think of solutions to get out of it. We saw this as an opportunity to stand up and remind people how we do things as a business and what we believe in, and to have fun doing it.”

Clearly, sticking a thumb in the eye of any perceived business threat is a standard tactic for the BrewDog founders. You get the sense that Watt and Dickie, both of whom are droll with a dry manner, enjoy it too. They practice a form of guerrilla marketing perfected by Virgin’s Richard Branson with elements that conjure master attention grabbers ranging from Kenneth Cole back to P.T. Barnum. “Over the years we’ve gotten decent publicity by sticking to our guns,” Watt allows, “by standing up for something that most conventional businesses would probably never do.”

For more on BrewDogs, watch this Fortune video:

In the U.K., BrewDog’s millennial cofounders have become household names as much for the capers they’ve pulled as for their bestselling beers. In 2015 they dropped stuffed cats from a helicopter into London’s financial district to celebrate a round of funding raised from beer drinkers rather than “fat-cat bankers.” To protest a Russian law targeting homosexuals, they put a lipstick-and-eye-shadow-wearing Vladimir Putin on the label of a new beer and shipped him a case. In another gag, they projected a 60-foot image of themselves in the buff onto the Houses of Parliament to declare a craft-beer revolution sweeping the land.

The BrewDog founders have used their rebel streak to create the U.K.’s fastest-growing food and drinks brand. Sales are expected to top 70 million pounds ($86 million) this year, a sevenfold increase since 2011. The company projects operating profit of $4.5 million.

Now BrewDog, which has been selling token quantities of beer in the U.S. for years, is planning a Scottish invasion, slated for early 2017. The company is building a North American base 12 miles outside downtown Columbus. Once completed, the facility will hold a 100,000-square-foot brewery, plus a taproom, restaurant, canning operation, and distribution hub. It will have a production capacity of 640,000 barrels; producing that much would put BrewDog in the top 10 of U.S. craft-beer makers. Should the company’s plans work out, BrewDog will soon have its own bars across the country.

Outsider appeal, it turns out, is a mixed blessing when it comes to artisanal suds. The $24 billion U.S. craft-brew market, the world’s largest, prides itself on being hyperlocal, and for many aficionados, the more obscure the brand, the better. Regional tastes rule. Pacific Northwest IPAs, for example, differ dramatically in aroma and hoppiness from those IPAs made and consumed in New England and Southern California, notes Bart Watson, chief economist at the Brewers Association.

BrewDog’s offerings get high marks, but competition is fierce. There are nearly 5,000 craft brewers in the U.S., all vying for a market that’s showing signs of losing its froth. First-half 2016 sales in the category grew 8%, flat by previous years’ standards, says Watson.

Pouring hops at the company’s Scottish brewery.Courtesy of BrewDog

No craft import has sold well across the U.S., Watson notes. “BrewDog is a well-known brand,” he says, “but I think they’re going to have challenges away from Ohio. Some markets are pretty competitive.”

Watt is well aware of the challenge that being an outsider entails. Lest anyone question BrewDog’s geographic bona fides, the company has already sunk $35 million into the Columbus brewery, and it has locked in U.S. distributors. “The key thing for us at the moment is to build strong local roots,” says Watt. “That means build a massive presence in Columbus and a base from there in Ohio to grow from.”

Like so many craft brewers, Watt and Dickie started making beer as a hobby, out of a musty shed in their native Aberdeen, with Radiohead blasting in the background. They started with mostly American pale ales, a kind they liked to drink but couldn’t easily find at the local liquor store. (Their expertise in American styles is part of what makes them so hopped up to break into the U.S. market.)

In 2006, when both were 24, they entered one of their creations in a London tasting event and won. It was a life-changing moment. Within a year the duo decided to quit their day jobs. They took out a 30,000-pound loan (the equivalent of a bit more than $50,000 at the time) and went into business doing what they love. Watt, a former ship’s captain, handled the business side. Dickie, the brewmaster, oversaw production.

Related: The Hottest Craft Beer You’ve Never Heard Of Is Launching in America

At first they sold their beers out of the back of their Volkswagen Golf at festivals and farmers’ markets around Scotland. “We bottled everything by hand back then,” Watt says. “We were just two guys and a dog. A few dog years later and we’re at 650 employees.”

BrewDog’s big break came in 2008 when it landed a contract to sell its beers in Tesco, the U.K.’s biggest grocery-store chain, giving it a national footprint. Riding the popularity of its Punk IPA brand, BrewDog began selling abroad within three years of launching. Today it operates 50 bars in cities around the world, including Tokyo, Rome, and São Paulo.

Like a lot of new businesses, BrewDog struggled to raise capital in its early years, a challenge that was exacerbated by the financial crisis. So the company improvised, turning to its customers for equity crowdfunding. Through four rounds in Europe, the tiny droplets of capital from fans—the average investment is between $400 and $500, according to Watt—have ­added up to 26 million pounds ($32 million).

Now BrewDog is replicating that approach in the U.S. In August it launched “Equity for Punks USA,” directed at American investors. For a minimum of $95, investors get two shares in its American affiliate, BrewDog USA Inc. As with most crowdfunding efforts, the more you invest, the more goodies you get. For those who buy more than $50,000 worth of shares there’s a free trip to Scotland to tour the brewery with the founders.

“We were just two guys and a dog. a few dog years later and we’re at 650 employees.”

Equity crowdfunding on this scale is new in the U.S. The Securities and Exchange Commission green-lighted it in June 2015 as part of the JOBS Act. The Obama administration hailed equity crowdfunding as a faster, simpler way for startups to raise capital. In truth, the process may be streamlined relative to a traditional offering, but Watt was still overwhelmed by the quantity of paperwork. “We had to have the SEC sign off on 200 pages of documents,” he says. BrewDog is one of the first craft brewers to test equity crowdfunding in the U.S. (By contrast, in late October, 26 brewers were trying to raise smaller sums on the far less scrutinized platforms Kickstarter and Indiegogo.)

So far the company is off to a slow start, with no sign it will reach the $50 million target it originally set. Halfway into its six-month campaign, according to Watt, the company has raised $2.9 million. With its Ohio construction budget already allocated from the company’s regular budget, he professes to be unconcerned. Watt says $5 million is a more realistic fundraising goal. But to hit even that modest target, BrewDog will need to find new ways of generating attention.

And that, of course, has always been the company’s strong suit. Watt and Dickie are already known to some in the U.S. They’re the stars of a TV series, Brew Dogs (think two genial Anthony Bourdain–like hosts sampling the local brews in different U.S. cities), albeit one that aired on cable’s lightly watched Esquire Network through 2015. And their various social media feeds teem with hundreds of thousands of craft-beer fanatics. In fact, it was BrewDog Twitter fans from Columbus who persuaded Watt to make it the company’s U.S. base of operation.

In his book, Business for Punks, Watt wrote that the best way for a startup to stand out in a tough market is to take risks. He certainly followed his own advice with the Elvis stunt. It may not have amused Authentic Brands (an ABG spokesperson says the proceeding against BrewDog continues), but it did generate plenty of attention, which put BrewDog’s crowdfunding campaign back on the radar.

Still, the whole affair left Watt in an awkward predicament. “At the moment my legal name is still Elvis. I plan to change it back at some stage,” he says. “I’m just not sure when I’ll be able to.”