With FTX on the verge of collapse, customers are wondering what happens to their crypto. Here’s what to do if you have an account there 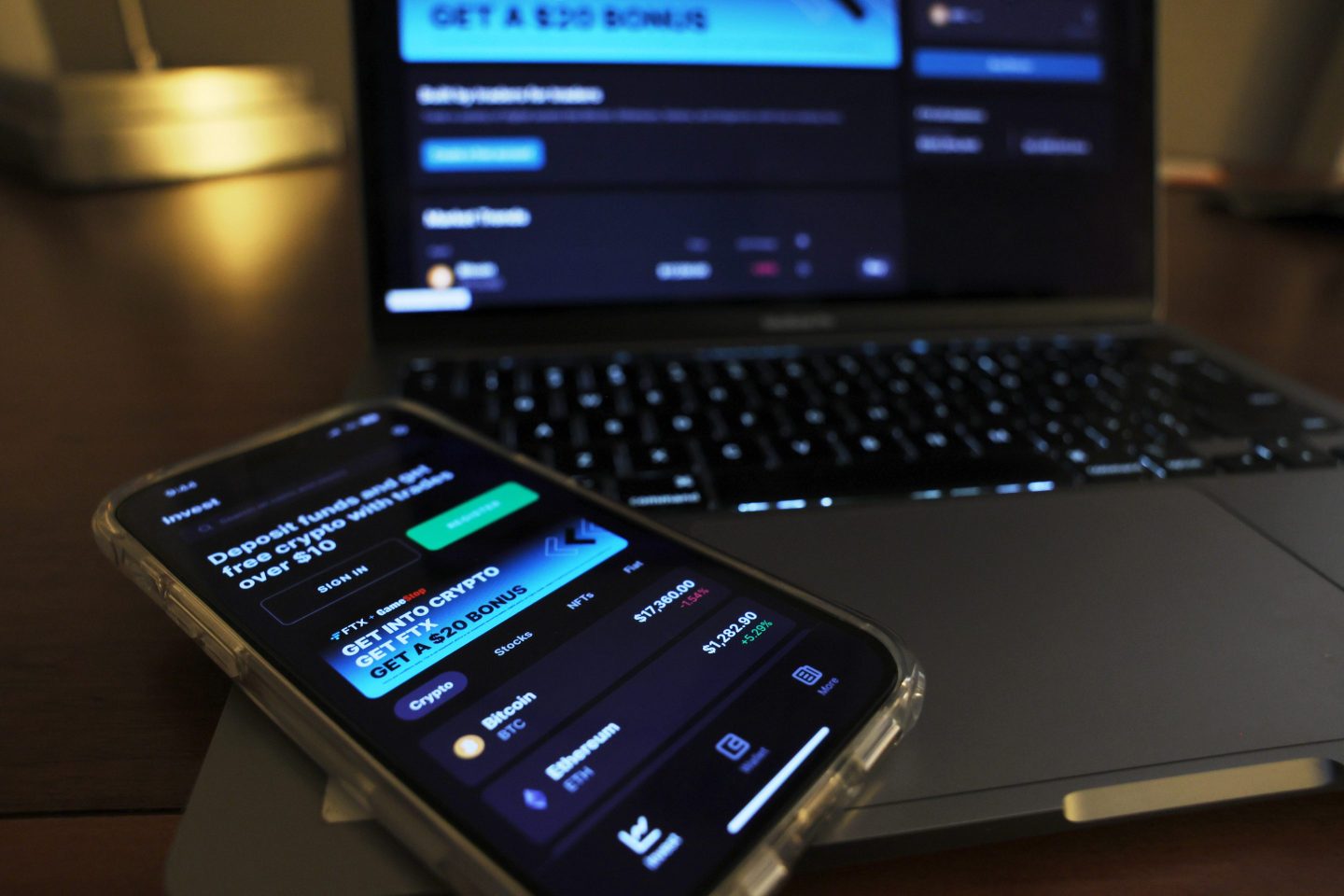 With Binance’s deal to acquire FTX dead in the water, the beleaguered crypto exchange faces an uncertain future—and even more so for its customers.
Michael M. Santiago—Getty Images

Cryptocurrency exchange FTX continues to scramble this week to cover a liquidity shortfall of as much as $8 billion, but it’s becoming more and more unlikely that CEO Sam Bankman-Fried will find backers after Binance walked away from a potential fire-sale deal.

“Sam needs to abandon his delusions of cobbling together some deal. There’s no one on earth that’s going to bail FTX out, unless the Fed is inclined to do it. It’s just not going to happen,” Nic Carter, cofounder and chairman of Coin Metrics and general partner at Castle Island Ventures, told Fortune’s Leo Schwartz on Thursday.

If FTX does go under, it could trigger a messy end for individual investors, the venture capital community, backers, and even other crypto businesses. “There are going to be big victims here,” Carter said. A lot of startups, especially in emerging markets, were custodying their funds on FTX since the firm did have a fairly large institutional focus.

“There will be a lot of innocent victims, not just individuals but also other firms like fintech firms, crypto firms that were providing access to end users,” Carter says. “There is going to be some extremely tough knock-on effects.”

U.S. and international regulators may have their hands tied

Cryptocurrency and the related business entities aren’t regulated in the U.S. the way other financial institutions like banks or credit unions are. Checking and savings accounts held by many consumers are backed by the Federal Deposit Insurance Corporation (FDIC), which promises to step in and reimburse customers whole if a bank fails.

Retail and institutional investors used FTX to buy and sell cryptocurrency, as well as stocks, ETFs, futures, options, leveraged tokens, and non-fungible tokens (NFTs). Customers could use FTX’s native cryptocurrency token FTT to get a discount on trading fees by paying for trades using the FTX token—the more FTT a user held, the bigger the discount. But unlike FDIC-insured accounts, no such safeguards exist for crypto investors using a platform like FTX.

That basically means there’s no guarantee that customer assets are safe right now—a reality Bankman-Fried subtly acknowledged. Although he tweeted Monday that FTX client assets were fine, Bankman-Fried quietly deleted that claim as of Wednesday.

“At this time, it is not clear what protections FTX has in place for its customers in case the company goes out of business,” Brock Pierce, crypto billionaire and chairman of the Bitcoin Foundation, tells Fortune.

In fact, there’s little regulation whatsoever in the crypto industry, which makes it difficult for federal agencies like the Securities and Exchange Commission or the ​​Commodity Futures Trading Commission to get involved. The CFTC is monitoring the situation, but told reporters that “any regulatory issues right now are unclear,” according to Axios. Meanwhile FTX’s collapse is under investigation by the SEC, two people apprised of the situation told the New York Times.

Part of the FTX issues seem to stem from the fact that it lent about $10 billion in customer assets to help prop up its sister company, Alameda Research. Given FTX had about $16 billion, that represented more than half of its total assets.

“If these are indeed the facts then it does appear to be possibly the largest financial fraud ever within the brokerage space—across all asset classes,” says Gene A. Grant II, founder and CEO of LevelField Financial, a financial services company based in Houston.

If fraud was involved, it could trigger investigations and investor lawsuits, but the details and circumstances involved remain murky at the moment. Bottom line, Grant says, it doesn’t look good for investors.

“Should it be true that FTX lent Alameda funds, and Alameda no longer has those funds, then the cryptocurrency is likely gone forever. Customers should be prepared to take significant losses,” Grant says. “Customers who interact with offshore enterprises, like FTX Trading, are accepting significant risks that are not entirely obvious when things are going well.”

Bankruptcy seems to be on the table, but exactly how any liquidation proceedings would work is up for debate. Unlike Celsius and Voyager, two failed U.S.-based crypto firms that have billions of investor funds tied up in bankruptcy proceedings, FTX is an international company headquartered in the Bahamas and incorporated in Antigua and Barbuda.

“There is a question as to what will be the appropriate jurisdiction for FTX Trading to submit the bankruptcy filing. Given it is an offshore corporation should it file in the USA? It is unclear,” Grant says.

If FTX does go the bankruptcy route, the exchange’s funds could be seized by an administrator to cover its debts. FTX customers would likely become unsecured creditors, meaning they’re at the back of the line of those who want to be reimbursed.

“They become mere unsecured creditors in the bankruptcy and can only hope there is a distribution to such creditors. Absent some relief program instituted by the government, I’m not sure there is any other redress for the customers,” says Jonathan Pasternak, a bankruptcy lawyer with Davidoff Hutcher & Citron.

In the string of recent crypto bankruptcies, failed crypto companies have mostly taken the position that customer funds are property of the estate and can be used for whatever they want, Pasternak says. “A lot of these monies were likely already burned up by the company.”

If FTX goes under, the outcome could be similar to that of Mt. Gox, a Japanese Bitcoin exchange that abruptly ceased operations in 2014, says RA Wilson, chief technology officer at 1GCX, a crypto exchange specializing in the trading of tokenized commodities and carbon credits. “Bankruptcy proceedings [will] occur, and it will take years for anybody with locked capital to see any resolution.”

It goes back to the old adage in the world of cryptocurrency “Not your keys, not your coins,” says Metallicus CEO Marshall Hayner. “Most likely, a bankruptcy proceeding that will draw out for years, and eventually creditors may receive somewhere between less than 10% to 25% of their funds returned,” he adds. “One can only hope that cryptocurrency can appreciate in the time it takes for the legal proceedings to finish.”

It’s worth noting that Bankman-Fried, also known by his initials SBF, said in a statement on Twitter Thursday that the current liquidity crisis does not involve the company’s U.S. subsidiary FTX.US.

“This was about FTX International. FTX US, the U.S.-based exchange that accepts Americans, was not financially impacted by this shitshow. It’s 100% liquid. Every user could fully withdraw (modulo gas fees, etc.),” Bankman-Fried wrote in a tweet.

But FTX investor Sequoia Capital wrote down the full value of its $214 million investment in FTX.com and FTX.US on Wednesday, a troubling indication the VC firm doesn’t see a path forward.

What retail investors can do now

For U.S. customers, Bankman-Fried has said they should be able to fully withdraw their funds. In recent days, customers have already pulled out more than $6 billion from the exchange. International customers have seen withdrawals paused this week, though the team has said it’s working through the backlog of requests.

“If consumers have an account on FTX, their only recourse is to wait patiently, and if their capital is freed up, to take it off the exchange immediately,” Wilson says.

Going forward, customers should consider using decentralized exchanges such as Defi Swap and Uniswap where they do not give up the custody of their cryptocurrency, Hayner says.

If FTX does go under, it would likely put a strain on the industry in the short term, Pierce says. “However, in the long term, the crypto and blockchain sector will continue to thrive. This is ultimately an opportunity for the industry to improve and learn through the process of trial and error.”