The Night $1 Million in Crypto Began Raining From the Sky 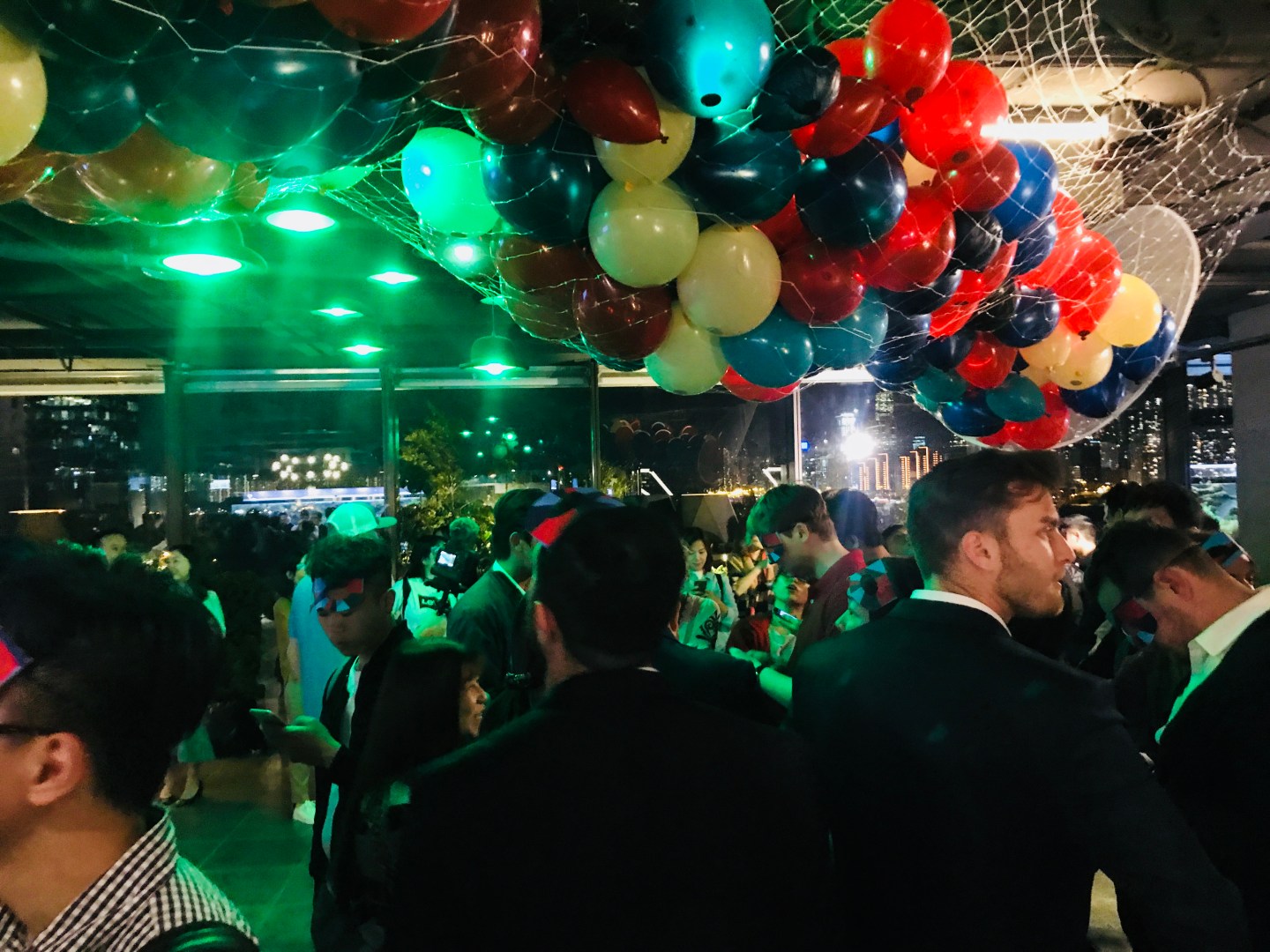 Free cryptocurrency tokens fell from balloons in Mainframe's first "airdrop" in Hong Kong on March 20, 2018. It was part of a giveaway in which the secure messaging company will release a total $1 million worth of crypto coins.
Photograph by Jen Wieczner

HONG KONG—The crowd, most of them wearing masks, squinted up at the raft of multicolored balloons floating near the ceiling, trying to make out the silhouettes of the coins suspended inside each one. And then, against the backdrop of Hong Kong’s neon-rainbow skyline, they raised their hands as the countdown began: “10, 9, 8…FREEDOM!” they screamed, amid a shower of confetti. Suddenly, the loud popping of a fireworks show filled the room as the balloons exploded, and the crypto tokens they contained fell into eager hands.

The spectacle Tuesday evening, held at the inaugural Token 2049 conference, released tens of thousands of dollars’ worth of free digital money. But it was just the first of 25 events in which a Utah-based secure messaging startup called Mainframe will give away about $1 million of its cryptocurrency—by literally making it rain crypto coins upon the heads of enthusiasts.

It’s also an example of the creative lengths to which blockchain companies are going in order to stay in-bounds of a threatened crackdown by the U.S. Securities or Exchange Commission on initial coin offerings, or ICOs. The SEC has said ICOs—in which companies sell digital tokens in order to raise startup capital—could constitute an illegal sale of securities. But Mainframe and others have found a way to dodge that dreaded label: Just give the crypto away for free.

Enter the so-called “airdrop,” in which companies bestow a sprinkling of their crypto coins upon select supporters via the Internet. Now, Mainframe is pioneering a version of that concept in the real-life, physical world.

“We are taking it literally,” Mick Hagen, Mainframe’s CEO and founder, told Fortune just moments before the tokens splashed down like it was Times Square on New Year’s Eve. “We thought, what if we do a real airdrop?”

A company literally just dropped tens of thousands of $ worth of crypto coins from these balloons, calling it the first-ever live “air drop” #token2049 pic.twitter.com/6MSCIoGdcH

It’s believed to be the first time anyone has introduced a brand new cryptocurrency via physical distribution (though in actuality, Mainframe’s tokens were to be exchanged for codes, which could then be redeemed online for virtual “MFT” coins). Mainframe initially sold its tokens in a private pre-sale exclusively for accredited investors (several of whom witnessed the airdrop), raising 27,000 of Ethereum cryptocurrency that’s currently worth some $15 million.

The capital will fund Mainframe’s development of a messaging service that is not only encrypted, but masks the trajectory of messages using “dark routing,” in order to be “censorship-resistant and surveillance-resistant.” Such technology, the company argues, will better preserve users’ freedom.

But while Mainframe had originally considered holding an ICO, it felt it unwise “given the regulatory environment.” SEC chairman Jay Clayton said in November that he had “yet to see an ICO that doesn’t have a sufficient number of hallmarks of a security,” and testified in a Senate hearing last month that he believed ICOs were in violation of the law. In a separate hearing on ICOs in Congress last week, Mike Lempres, chief legal and risk officer for cryptocurrency exchange Coinbase, said the company does not trade ICO tokens because it “cannot take the risk of inadvertently trading an asset that is later found to be a security.”

It’s unclear if Mainframe’s literal “air drop” would pass legal muster in the United States, or if regulators in other countries will agree the gimmick does not violate securities laws.

Whereas the SEC has mostly been concerned with protecting investors from financial harm, Mainframe also wanted to make sure its token recipients would be safe from physical injury. “There were a lot of different logistics to work through. We don’t want anyone to get hurt,” added Hagen, who describes himself as a Princeton drop-out and Mormon on his Twitter profile. After all, the tokens, roughly the same size and weight as poker chips (and valued at 0.1 Ether, or about $56 apiece), could be dangerous if dropped from high.

So Mainframe opted to insulate the tokens with inflatables. “When the balloons fall it shouldn’t hurt because of the balloon,” Hagen said. “We want people to walk away thinking, this was a fun airdrop.”

The display conjured visuals of the economic idea, advocated by former Federal Reserve chairman Ben Bernanke, of “helicopter money.” A metaphorical term for how a central bank could stimulate the economy by creating money from thin air, Bernanke wasn’t literally suggesting dropping it from a helicopter.

Mainframe, however, did consider that possibility. “We were thinking drones, but if [the token] hits somebody’s head, it might hurt,” Hagen said.

For those who missed the first-ever live airdrop, Mainframe will bring the show to four more cities in the next two weeks—Shanghai, Beijing, Seoul, and Tokyo—with more to follow. The company is calling this method of distribution “proof of being,” a play on Bitcoin’s method of verifying transactions, known as proof of work.

There are also two other ways to scoop up the free tokens if you can’t attend in person: “Proof of freedom,” which Hagen said could be some form of expression about Mainframe such as an essay, video or blog; and “proof of heart,” which the company is not yet willing to explain in detail.

But Hagen is envisioning it as an antidote to the “get rich quick” mindset that has pervaded the crypto world, a way to ensure Mainframe token holders aren’t just in it for the money. After all, the airdrops strictly limit attendees to leaving with just a single token. “We wanted to have methods to make sure we have true believers in technology, and true believers in Mainframe,” Hagen said.