The ‘Doomsday Clock’ just moved 90 seconds to midnight: Who sets it, and does anyone really care? 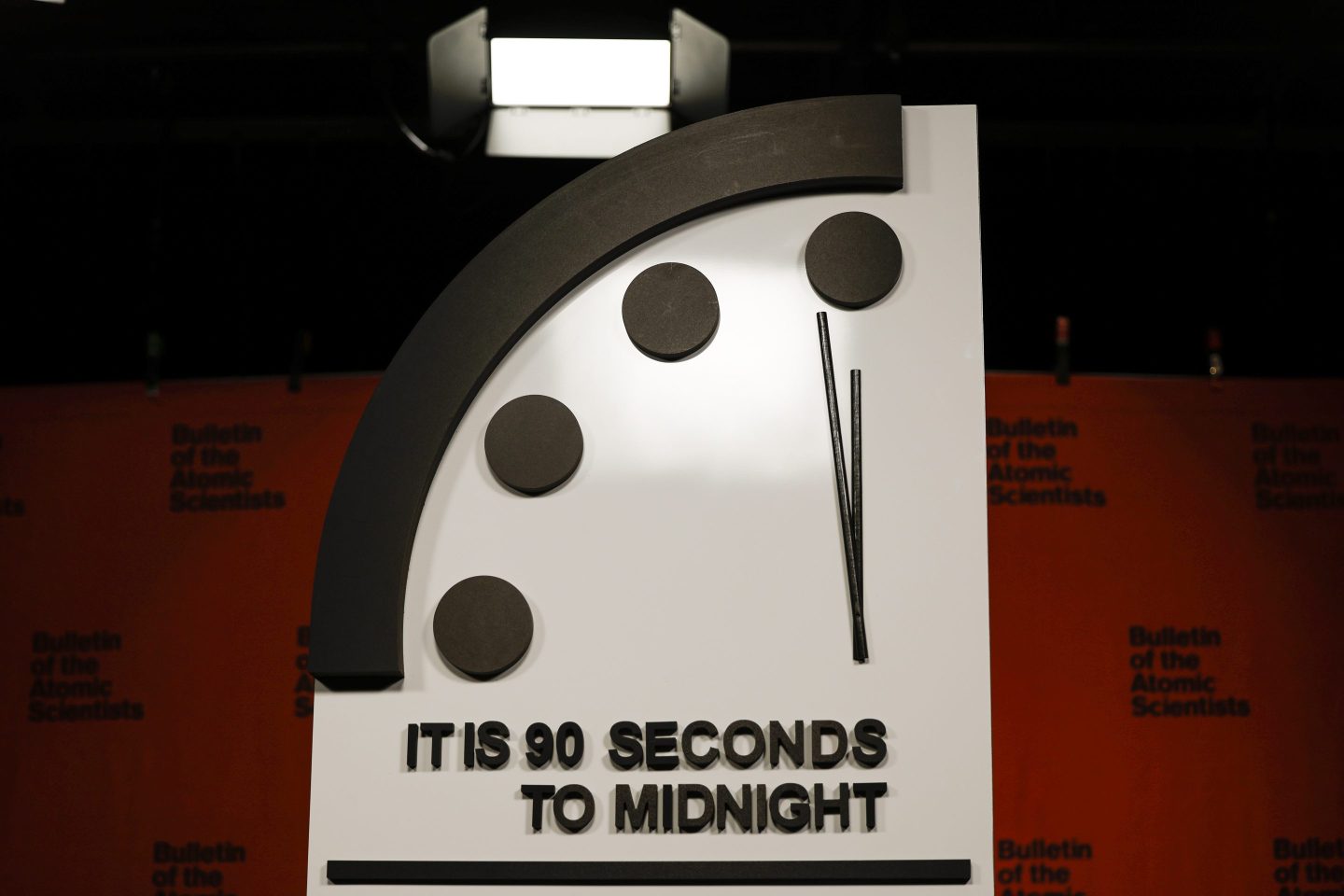 During the COVID lockdowns in 2020, the world felt so dystopian, that the Doomsday Clock was set to 100 seconds to midnight—the closest to a global apocalypse since the metaphoric clock came into existence more than seven decades ago.

The closest, that is, until now.

In brief, Armageddon is no longer a remote abstraction.

“Nuclear risks increased significantly last year due largely to Russia’s unprovoked invasion of Ukraine,” said Steve Fetter, professor of public policy at the University of Maryland, announcing the new setting on Tuesday. Russian President Vladimir Putin, he said, “has repeatedly raised the specter of nuclear use.”

Of course, the Doomsday Clock is not a timepiece you can put on your bookshelf, although there is a physical reiteration of it in the University of Chicago Keller Center on New York City’s Upper East Side, indicating year by year how close we are to doom—at least according to the group charged with measuring the global threat level.

What is the Doomsday Clock’s purpose?

The Ukraine War, climate disaster, and the pandemic have all given the Doomsday Clock fresh relevance. But in many ways, it is a Cold War relic.

After the U.S. exploded the nuclear bombs over Nagasaki and Hiroshima in Japan in 1945, effectively ending World War II, Albert Einstein and other physicists at the University of Chicago began sounding the alarm about the bombs’ existential threat to the planet.

They feared that a Cold War arms race between the U.S. and the Soviet Union could result in obliterating entire parts of the world.

“Scientists were saying it was necessary to make judgments about what to do with their inventions,”  John A. Simpson, one of the original scientists, said later on.

So, in 1947, an artist drew the first Doomsday Clock for the cover of the University of Chicago’s Bulletin of Atomic Scientists, showing the setting of seven minutes to midnight. The image stuck, and has since served as a yearly snapshot for the state of the world.

Who sets the Doomsday Clock?

While that seven-minutes-to-midnight setting seemed alarming back in the 1940s, that level is the most relaxed the Doomsday Clock has been since 2002. The most peaceful year of all was 1991, when the Soviet Union collapsed, ending the Cold War and with it, Communist rule in central and Eastern Europe. It stood at 17 minutes to midnight.

Since then, the clock’s doomsayers have sounded more and more anxious, as they have begun weighing new threats; the setting is set each year by a group of 18 experts, including climate and health scientists.

The clock, he says, aims to “give a sense of the catastrophic risk that we face as a planet, largely through our own deliberate activities.”

Does anyone really care?

But leaving aside the Doomsday Clock, there is no shortage of international organizations—many better resourced—that research major threats, including the United Nations; the U.N. Secretary General Antonio Gutteres told the global body last year that “humanity is just one misunderstanding, one miscalculation away from nuclear annihilation.”

That has left the old Doomsday Clock open to accusations that it is a dated icon which should be retired.

“The clock is a publicity stunt—and a successful one,” Lawrence M. Krauss, who headed the Doomsday Clock’s group of scientists between 2009 and 2018, wrote in 2020, when the clock setting was moved to 100 seconds to midnight.

But Krauss says the clock should not be regarded as a true measurement of risk.

“Not only is the Doomsday Clock unscientific,” he said, “the factors of its setting are now dominated more by policy questions than scientific ones.”

When the clock’s keepers announced its record disaster level on Tuesday, the tweets questioning its value came thick and fast.

Ninety seconds to midnight? “Nonsense,” responded Twitter user Tom Nolan after the announcement. “In reality, it is at about lunchtime.”