Inflation made groceries a lot more expensive, but had zero impact on food insecurity, experts on food and agricultural economics say 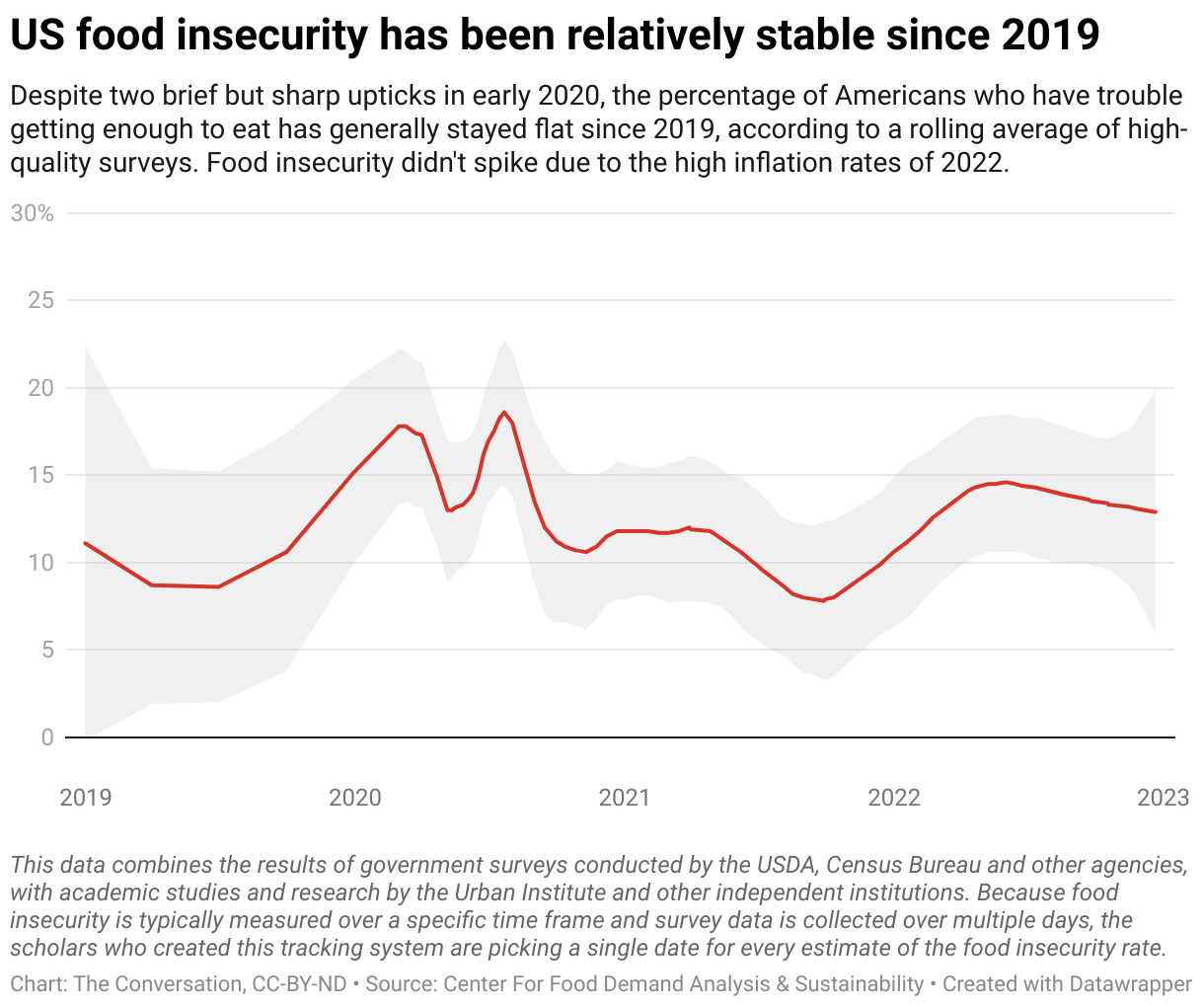 The food insecurity rates look a lot different than the inflation rates.
The Conversation

Grocery prices soared by 11.8% in 2022 – the swiftest pace since the early 1980s. Rapid inflation is, naturally, leading to concerns that it’s getting harder for Americans to put food on the table.

Indeed, Feeding America, a nonprofit that supports and connects roughly 60,000 food banks and pantries nationwide, has said that at least half of its members are seeing more demand for their services. And many journalists are reporting about struggling parents waiting in long lines for free food.

We are experts on food and agricultural economics. Together we have created a new data dashboard that tracks U.S. food insecurity – the technical term for having trouble getting enough nutritious food – based on publicly available information.

The data we’re collecting ourselves, as well as the information that we’ve compiled from other sources, including the Census Bureau, isn’t yet reflecting a sharp uptick in households without enough to eat. U.S. food insecurity has remained at troubling and yet relatively flat levels.

Based on all the data we’ve included in our dashboard, we estimate that over the course of 2022 somewhere between 11% and 15% of those living in the U.S. struggled with securing their next meal.

This range relies, in part, on internet-based surveys that can often produce food insecurity estimates that are higher than official government data. Because it is expensive to reach a true random sample of Americans, cheaper online surveys are commonly unrepresentative of the U.S. population but still prove to be a key tool for measuring changes compared with previous online surveys.

Food insecurity is officially assessed based on a series of survey questions developed by the U.S. Department of Agriculture Economic Research Service. Every December, the federal government uses this measure to assess food insecurity for the past year. Following extensive analysis, it releases that data in September of the next year.

During those same three years, however, other researchers detected both lower and much higher rates. Our average of these surveys suggests that national levels may have peaked at nearly 19% in the months following the onset of the COVID-19 pandemic the U.S. in March 2020.

Within about six months, food insecurity returned to the 10%-11% range, based on our average of available data.

A mismatch between the facts and the coverage

Why are reports of long lines at food banks and increased demand for free food apparently at odds with the relative stability in the national food insecurity rate?

One reason could be that food insecurity rates, which generally overlap with social and economic inequality, can differ sharply.

For example, Nassau County, which spans many of New York City’s largely affluent Long Island suburbs, had a food insecurity rate of 5.7% in 2020. In nearby Bronx County, New York state’s lowest-income county, the food insecurity rate was more than three times that, at 19.7%, according to Feeding America’s Map the Meal Gap study.

As a result, food security can get worse or better in particular communities without affecting the national rate.

Another explanation could be that government programs and nonprofits that help people get enough food are succeeding. The number of people getting Supplemental Nutrition Assistance Program benefits, sometimes referred to as “food stamps” and generally just called SNAP, increased by 2.8% from January to October 2022, to 42.3 million.

In some states, SNAP benefits remain at the elevated levels instituted when the COVID-19 pandemic began.

Survey data from our Consumer Food Insights reports also shows that the average length of time households receive SNAP benefits increased from 9.5 months to 12.4 months in 2022.

Nearly 7% of households were visiting food pantries in December 2022, according to the Census Bureau, up from 4.4% in 2019. At the same time, the USDA announced an additional US$2 billion in funding to emergency food providers to deal with elevated food costs.

The charitable food system is decentralized, making it hard if not impossible to determine whether the amount of food donated to Americans overall has changed. As Feeding America reports, the 2.5 billion meals that its network provided in the first half of 2022 came from a range of donors, with its corporate partners playing a big role.

The data further suggests that, while consumer confidence about the overall economy is at a historically low level, fears of an economic downturn don’t reflect the fact that many people still have more money saved up than they did before 2020. Similarly, unemployment, which dipped to 3.5% in December 2022, is at the historically low levels last seen before the COVID-19 pandemic.

Finally, researchers have found that incomes over time and accumulated savings are more closely tied to whether families will experience food insecurity than what their breadwinners currently earn. Because the disposable incomes of many Americans rose in 2020 and 2021, it will probably take a deeper economic shock than the nearly 12% increase in grocery prices registered between December 2021 and December 2022 to make food insecurity soar.

To be clear, we do not mean to suggest that food insecurity is not a serious issue or that having more than 1 in 10 Americans struggle to get enough to eat is acceptable.

Rather, we noticed that policy and research interest in food insecurity spiked in the year following COVID-19 shutdowns, resulting in much more data on the topic before dwindling in 2021. Today, the public is paying more attention to the topic again.

Food banks and SNAP benefits collectively have provided around $130 billion in annual economic relief for low-income Americans in recent years, a number that includes a sharp increase in benefits. We believe that these efforts are vital.

We propose that conducting and releasing more frequent high-quality surveys would help bring sustained attention to the issue, clarify trends and allow experts like us to make better predictions.

And because all food insecurity surveys are subject to sampling errors and offer only a snapshot regarding a single time frame, we believe that pooling the multiple surveys featured in our data dashboard can better inform policymakers and charities that seek to address food insecurity and rapidly respond when levels spike.