Southwest Airlines’ holiday week from hell may cost the company up to $700 million. Here’s what boards can learn from the fiasco 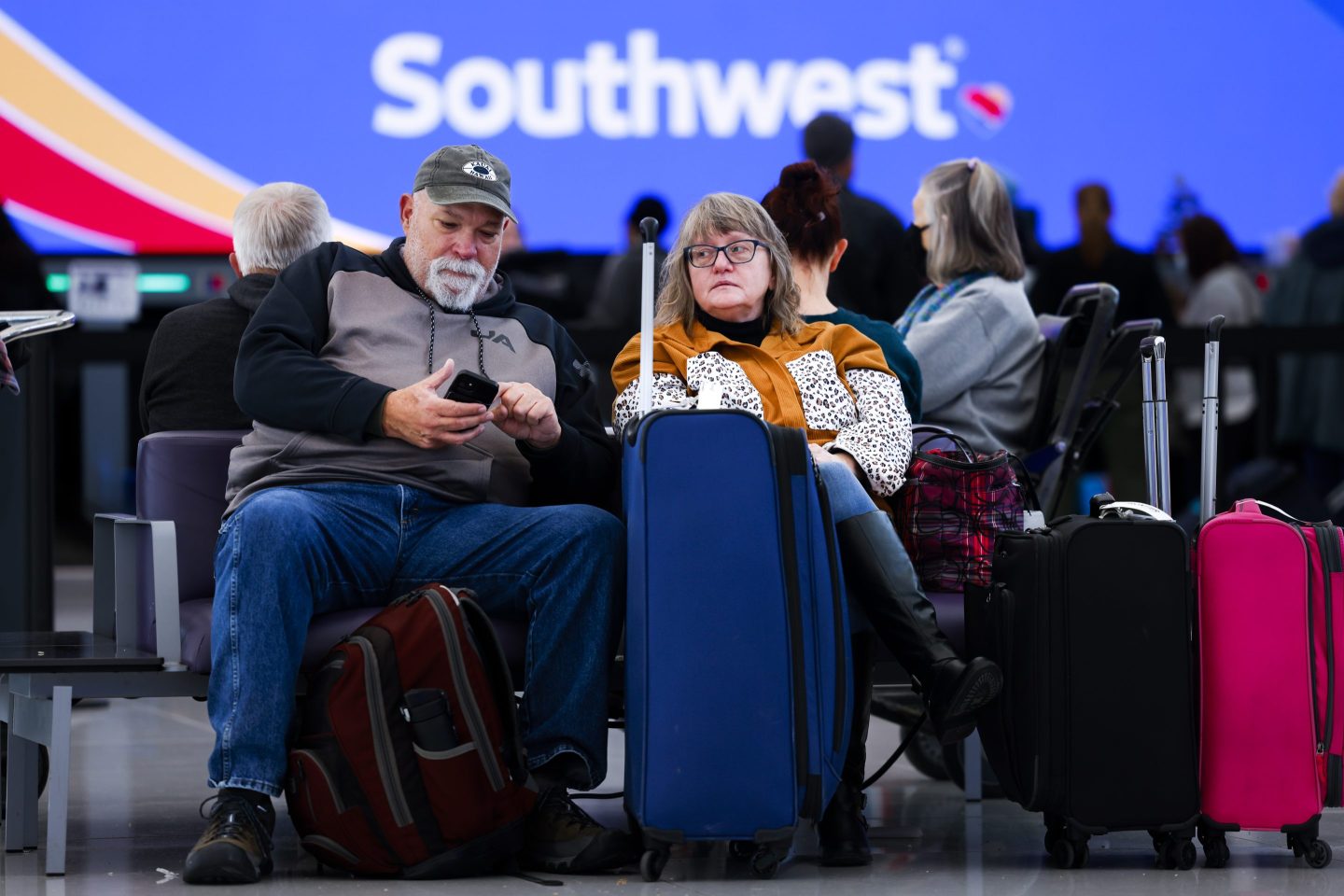 Starting Dec. 22, the company canceled more than 15,000 flights as it tried to recover from a winter storm, leaving thousands of people stranded. In all, some estimate that 1 million customers may have been affected.

The airline blamed its outdated crew scheduling software for the chaos, reporting that the digital infrastructure became overwhelmed by the volume of changes it had to process, which forced staff to painstakingly find and reassign crews manually.

This debacle raises an obvious question: How did the Southwest board overlook a technological time bomb that may eventually cost the company $300 to $700 million?

One possibility is that Southwest directors and executives have been focused on the wrong metric—short-term stock price—over the past few years. As Zeynep Tufekci writes for the New York Times, it’s not uncommon for CEOs to practice willful denial when pressed to upgrade old software. Instead, they may look for cheap fixes, kicking the cost of a tech revamp down the road so the company doesn’t take a short-term financial hit, which could dent the stock price and CEO pay.

Gianvito Lanzolla, a professor of business strategy at Bayes Business School in London, tells Fortune that boards are sometimes complicit in this digital shortcoming, often by being too controlling or simply unaware of a company’s tech deficiencies. His recent research offers takeaways for corporate boards that want to avoid Southwest’s fate.

In a study published last year, Lanzolla and two other researchers examined the board’s impact on digital transformation by analyzing S&P 500 data and the language used in shareholder letters. They found that investors value companies most when a CEO plans to invest in digital technology that exceeds that of competitors. Secondly, investors know that CEOs need board support for such expenditures, even if the payoff won’t materialize soon. As a result, investors also assess whether the board is thinking strategically.

Companies in the study were rewarded with higher valuations when their boards allowed and supported experimentation with new technologies. In other words, boards that are too focused on monitoring a company’s cash flow are not always positively perceived.

Lanzolla notes that the most effective boards have a diversity of knowledge and independent directors with digital expertise that complement and support the CEO’s vision. Investors typically see such boards as less likely to fall victim to groupthink and more likely to enable meaningful tech adoption.

Southwest’s corporate board falls short of the knowledge diversity measure. As Michael Hiltzik of the L.A. Times writes, concerning their occupational background and perspectives, “The board is as homogeneous as they come.” It includes CEO Bob Jordan, chairman and former CEO Greg Kelly, a former chief legal officer for the airline, and two ex-CEOs of other companies. No board members are obvious tech leaders, Shivaram Rajgopal of Columbia Business School writes in Forbes. He and other academics suggest that boards need a new type of committee dedicated solely to technology and innovation and staffed by directors with the right expertise to guard against a Southwest-style failure.

To be sure, it’s possible that Southwest got its priorities wrong. The airline told Fortune in a statement that it has an annual capital spending plan that includes funds for tech investments. In recent years, the company has upgraded its reservations, ground operations, and maintenance technology. “The tools we use to recover from disruptions serve us well outside of extreme circumstances,” a spokesperson said. “But Southwest will remain vigilant to continue already existing plans to strengthen processes and systems.”

That brings us to another truism about technology that Lanzolla says many boards do not take to heart. “Digital transformation is not a destination.” Rather it’s “a set of choices within a set of possibilities enabled by technology.” Finding solutions, Lanzolla adds, is a journey.

The board’s job is to ensure that trip is not interrupted.

—A question leaders should ask to strengthen their relationships with employees, according to Jim Detert, a professor at the University of Virginia’s Darden School of Business

👓 Read: Between remote work, the war in Ukraine, and government warnings, boards are finally taking their cyber risk more seriously. Here’s a look at what executives and governance experts see changing and where progress has stalled.

📖 Bookmark: In a war on greenwashing, European regulators proposed restricting the use of buzzwords like “climate” and “impact” in product titles. This summary of the suggested guidelines includes a handy table of key features.

AMC added Keri Putnam, former Sundance Institute chief and Miramax production president, and veteran IT professional Denise Clark to its board. AMC director Lee Wittlinger, of Silver Lake, is resigning. TIAA appointed Ramona Romero, general counsel at Princeton University, to its board of trustees. Southern Company announced that Chris Womack, CEO of Georgia Power, will be Southern’s next CEO and a board director beginning March 31, when Thomas Fanning will step down as CEO and chairman, becoming executive chair. Alliant Energy’s board tapped Stephanie Cox, a seasoned energy executive, as an independent director; she will replace longtime director Dean Oestreich. Appian added Shirley Edwards, most recently a global client service partner at EY, to its board.

- The FTC proposed a rule blocking companies from asking employees to sign noncompete agreements. Critics of such contracts say they hold down wages for middle earners; companies say they offer protection from startups.

- One of the many Tesla shareholders frustrated with CEO Elon Musk’s preoccupation with Twitter has submitted a resolution on whether the board ought to produce a key-person risk report. It may be just one of several proposals addressing Musk’s leadership at Tesla’s annual meeting in May.

- The board at Noris Medical says its late CEO hid knowledge of his terminal illness from directors, which jeopardized the business. Now it’s suing the former CEO’s estate.

- Rumors of capitalism’s demise have been greatly exaggerated, writes Fortune executive editor Nick Lichtenberg. Now that the “everything bubble” has popped, he says, it’s time to prepare for “retro capitalism.”

- Besides a dose of glamor, what do celebrity directors—Serena Williams, Shaq, Emma Watson—bring to boards? Business professors weigh in.

A picture of a post-Trump Republican party is coming into focus, and its most prominent figure might be Florida Gov. Ron DeSantis, who won reelection to a second term in November. In a deep dive for Bloomberg, Joshua Green digs into DeSantis’s bizarro-world strategy for setting his GOP brand apart: attacking big business.

“As DeSantis moves toward a possible presidential bid, he’s expanding his fight against corporate America, this time going after big asset managers and Wall Street banks. In an attack over the summer he declared, ‘Masters of the Universe are using their economic power to impose policies on the country that they could not do at the ballot box.’ He returned to the theme in his swaggering victory speech on election night. ‘We will fight the woke in corporate America,’ he said. ‘Florida is where woke goes to die.’ Conjuring up a distant, shadowy financial elite and vowing to fight it on behalf of the little guy is textbook populist politics—and another move borrowed from Trump, who made big banks and famous financiers into useful villains in his 2016 presidential campaign. DeSantis is betting he can generate enough resentment about ‘woke capital’ to keep his momentum going. If he’s right, he may go from emulating Trump to succeeding him.”

Read the rest here and enjoy your weekend.