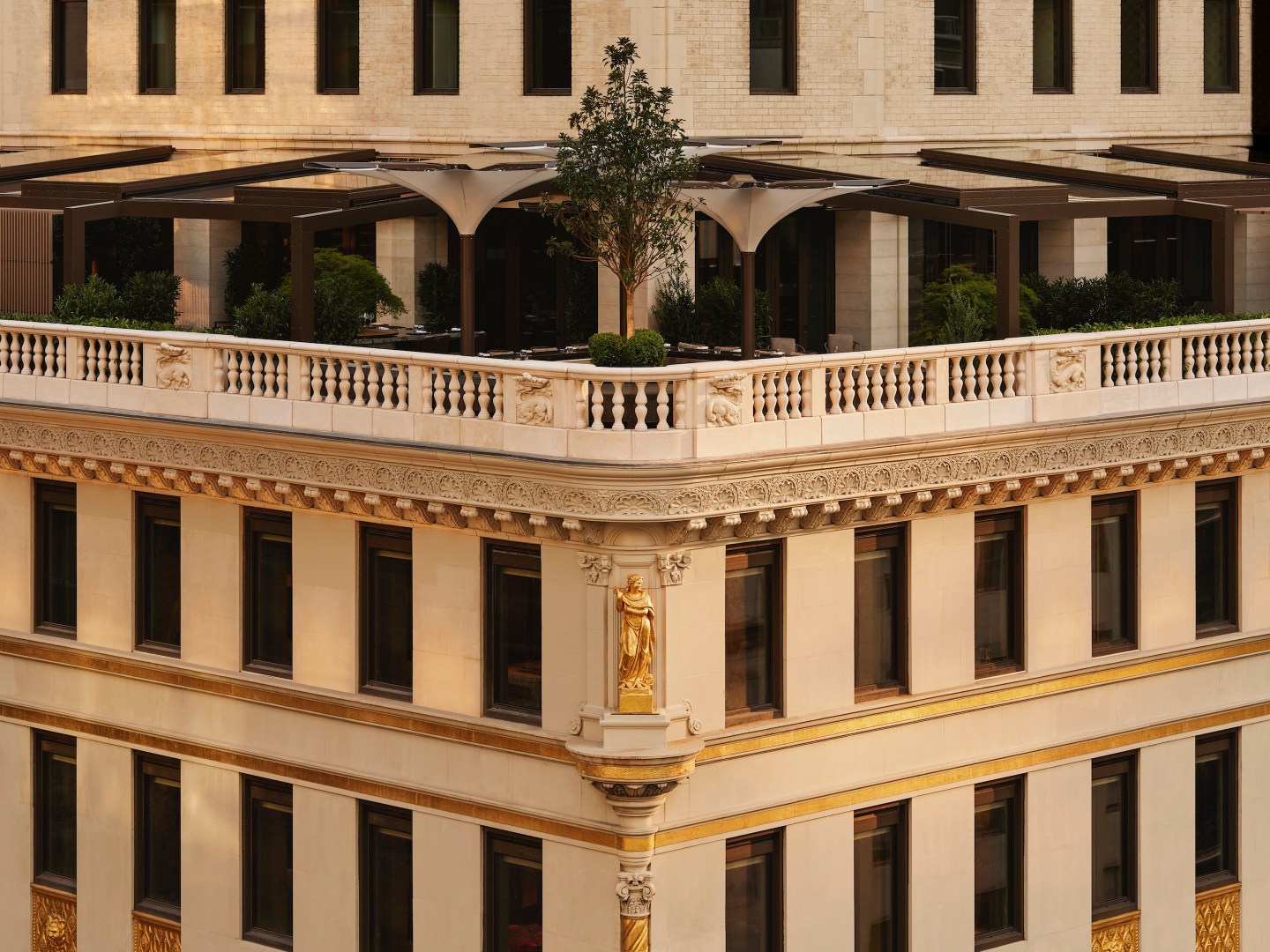 Whether you’re a tourist new to the city or a tried and true New Yorker who has lived here for decades, one thing is for certain among everyone: Midtown Manhattan is madness.

There are few places where one can catch a breath, and Aman’s newest luxury hotel here has surely done the impossible: it has built a veritable oasis in the middle of one of the most bustling intersections in the United States. When one passes the velvet rope and enters through the double doors at ground level before heading into the elevator to the lobby on the 14th floor of the new Aman New York, which just opened in August, gone is all the noise—the cars honking, the people yelling, the endless and mindless chatter. Here, you really can get away from it all from just a few feet away.

The third Aman property in the United States and 34th worldwide, the Aman New York, located in the Crown Building, hosts 83 suites—and spacious ones at that as the starting square footage is around 750, nearly double the average studio apartment in the area— and 22 residences as well as a private membership club central to the hotelier’s global brand.

The 14th-floor wraparound garden terrace restaurant offers year-round dining, a rarity in one of the most densely populated cities in the world.
Robert Rieger

The doors to Crown Building—originally known as the Heckscher Building, as it was named the—first opened in 1921. But it wasn’t till 1922 when the tenants finished moving in. At that time, it was the second tallest building in New York City—second to the Woolworth Building downtown in the Financial District—and the tallest building in Midtown Manhattan. It wasn’t until the completion of the Chrysler Building in 1930—and subsequently the Empire State Building in 1931—that it was surpassed in the neighborhood.

And the city was really growing around Midtown at that time. After World War I, it was still primarily a residential neighborhood, with very little commercial presence. Quite a contrast to the present as the intersection at 57th Street and Fifth Avenue now includes flagship stores belonging to Louis Vuitton, Bulgari, and Bergdorf Goodman.

Inside the bedroom of a corner suite.
Robert Rieger

When the Heckscher Building first went up, 57th Street was known as Marble Row because of the large marble mansions that dotted the street then. (With its skyscrapers, designer department stores, and luxury condos, today it is often referred to as Billionaires’ Row.) The largest of the homes on Marble Row was the Vanderbilt home, right across the street from where Bergdorf Goodman sits now. It was around this time, inspired by European culture (and wealth) that the matriarchs of the Vanderbilt and Rockefeller families assembled a collection of 101 art pieces to build and found the Museum of Modern Art (MoMA), which was first housed in the Heckscher Building. The collection lived in the building for six years before moving to the Rockefeller townhouse, which is now the garden area of the MoMA, and the present structures were built around it. Many of those 101 works still remain as part of the MoMA’s permanent collection, and the Aman New York offers its guests special tours here led by PhD-accredited art historians.

For the first several years, the building was inhabited by gallery merchants, fashion designers, shoe cobblers, and leather goods artisans.  And representing another European cultural touchstone and influence, French fashion house Christian Dior opened his first location in both New York and the United States in the building in 1948. The building has had a tumultuous ownership history over the decades since, which included the renaming of the structure to the Crown Building in 1983, when lighting designer Douglas Leigh was commissioned to gild and illuminate the façade with 30 gallons of liquid gold.

All of the hotel’s 83 suites include working fireplaces—a first for New York City.
Robert Rieger

When renovations for the Aman New York after the site was chosen in 2015, the designers painstakingly restored both the gilded façade and the interior, a great deal of which was made with marble in a nod to Marble Row. One of the things that architect Jean-Michel Gathy of Denniston Architects is known for creating intimate spaces within larger ones, mostly through the use of light. So light really makes up approximately 50% of the design plan. The team also balanced East Asian and Southeast Asian design influences with the use of mostly Western materials as well as contemporary artists. (Several of the original artworks in the corner suites, for example, were made with materials found in North and South America.)

And in tradition with other Aman properties, the architects pulled many design notes from Aman’s portfolio of more than 30 properties worldwide. Upon entering, guests might notice in the double-height atrium that the latticework patterns on the ceiling and the marble floor match, which were inspired by the shingle roofs of Indonesian architecture. (Aman has five properties in Indonesia.) And the reflecting pools on the outdoor terrace on the 14th floor were constructed as a nod to Aman’s first property, the Amanpuri in Phuket, Thailand, which opened in 1988.

The East-meets-West theme continues in the Aman New York’s two restaurants. Arva—which serves breakfast, lunch, and dinner—is led by Chef Dario Ossola, who moved from the Aman Venice to New York for this project. Primarily an Italian restaurant, the restaurant is stressed to be very ingredient-centric thanks to a partnership with more than 900 local food purveyors and farmers, and 80% of the produce used in the restaurant is sourced locally.

Aman doesn’t usually design bars or restaurants based on the cuisine, but they are designed with hints to the menu and experience. For example, at Arva, the petrified wood in the ceiling is meant to be reminiscent of the sandy bottoms of the Mediterranean. And even the latticework underneath the bar evokes the waves, as seen from a bird’s eye view.

Outside of Arva and the lounge is a 6,000-square foot terrace, built to be open year-round. For winter, the snowmelt floors and heaters on full blast mean guests only need a good jacket or maybe a light blanket for a very cozy time. And in the summer, the glass walls and ceiling retract for a total open-air experience.

On the other side of the lobby is Nama, a Japanese restaurant spearheaded by Chef Takuma Yonemaru, serving dinner and custom craft cocktails, with a special dedicated bar off the side of the entrance just for the omakase menu. The designers took the omakase dedication very seriously—so much so that the table is made from one massive slab of hinoki wood (a type of cypress), sourced from northern Japan. Otherwise, most of the restaurant’s design is very much Frank Lloyd Wright-inspired architecture, with central atriums that separate the dining areas, speaking to the verticality of the space.

If the kitchen is the heart of the home for most people, then the heart of the home for any Aman property is the spa. And at Aman New York, the hotel has dedicated three floors to its wellness spa and fitness center, spanning 25,000 square feet in total. And while many of the treatments draw upon Eastern practices of wellness, the hotel also wanted to bring more Western medicine into the mix. The hotel tapped Dr. Robert Graham, a Harvard-trained medical doctor who is also an advisor to New York City Mayor Eric Adams on food and health policy, to oversee the health assessment program. Doctors are available onsite weekly for consultations on nutrition, vitamin mineral composition, blood panels, and more, and they routinely host luncheons and symposiums on topics like gut health, stress levels, and more in-depth topics with discussions about diabetes and obesity.

From a design aesthetic perspective, the interior of the spa lobby and boutique is much lighter in color, which is meant to open the aura. Aman touts itself as a spiritual brand, and it very much believes in energy and wanting to design a space that helps guests with that. The 24-hour fitness center is a bright space with the same lighter tone wood panels and floor to ceiling windows, with an array of Technogym cardio machines—and even a pair of infrared machines (one treadmill and one elliptical) so that guests and members can train in alternative conditions. (For example, even if the thermostat is set at a moderate room temperature in the gym, a guest can adjust the settings in these machines for warmer or colder temperatures with varying humidity should they be training for a marathon somewhere else.) And just outside the fitness center, there is a fully standalone cryotherapy chamber (not just pods), where guests and members can reserve a three-minute time slot for an extra deep freeze to get the blood moving.

Right below the fitness center is the Pilates and yoga studio as well the spa treatment and locker rooms. And while certainly massages and facials are on the menu, that’s on the beginning of what’s on offer. Guests can book treatments that last anywhere between one to nine hours. (A happy medium might be the “New York Signature Treatment,” a two-hour session that includes a full body scrub and a 60-minute massage.) Guests looking for an extra special spa day might consider booking one of the private suites, which include a private relaxation area, a private outdoor terrace (constructed similarly to the one on the 14th floor with snowmelt floors and a retracting roof), a private treatment room, a private sauna, and even a private hammam for a full scrub. The private suites also come with tasting menus with mezzes, so you really can spend the whole day there.

But much like anything new and luxurious in New York, accessing of the Aman New York’s amenities is quite exclusive. For starters, with the exception of the Jazz Club on the underground cellar level, these spaces aren’t open to the public for drop in drinks or dinner. (A considerable exception could be the spa, as customers could make a reservation for a day pass, treatments, the hammam, etc.)

The hotel does host some small corporate events for dinner—or even full buyouts—so it’s possible local residents could enter that way. Otherwise, access is reserved for hotel guests, residents, and Aman club members. (Membership rates start around $200,000, and hotel stays currently start at $2,600 per night.) That said, while many of the hotel’s clientele comes from around the U.S. as well as Europe, the Middle East, and Asia, hotel management does note a considerable number of its guests are actually New Yorkers booking short-term staycations, especially during the holidays for those who want a memorable and luxurious experience without the hassle of traveling.

And Aman New York is just the beginning for the brand over the next couple years. Joining the rustic but still extremely chic and luxurious resorts Amangani in Wyoming and Amangiri in Utah, Aman plans to expand its portfolio in Miami Beach in 2024 and Beverly Hills in 2026.