Doctors are so short of organ transplants that they are considering bioengineered pig organs: ‘It all sounds science fiction-ey but it’s got to start somewhere’ 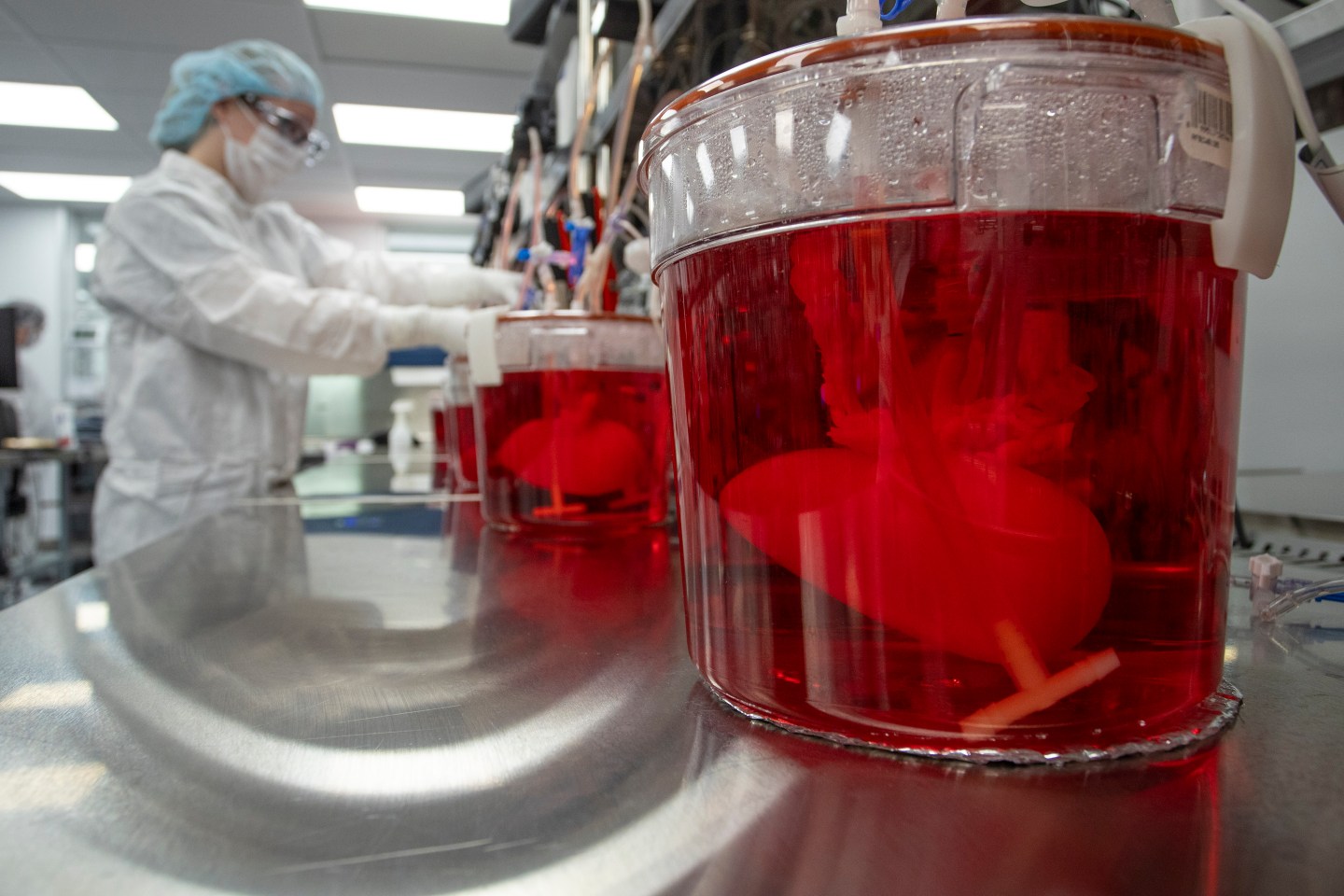 The ghostly form floating in a large jar had been the robust reddish-brown of a healthy organ just hours before. Now it’s semitranslucent, white tubes like branches on a tree showing through.

This is a pig liver that’s gradually being transformed to look and act like a human one, part of scientists’ long quest to ease the nation’s transplant shortage by bioengineering replacement organs.

The first step for workers in this suburban Minneapolis lab is to shampoo away the pig cells that made the organ do its work, its color gradually fading as the cells dissolve and are flushed out. What’s left is a rubbery scaffolding, a honeycomb structure of the liver, its blood vessels now empty.

Next human liver cells — taken from donated organs unable to be transplanted — will be oozed back inside that shell. Those living cells move into the scaffolding’s nooks and crannies to restart the organ’s functions.

“We essentially regrow the organ,” said Jeff Ross, CEO of Miromatrix. “Our bodies won’t see it as a pig organ anymore.”

That’s a bold claim. Sometime in 2023, Miromatrix plans first-of-its-kind human testing of a bioengineered organ to start trying to prove it.

If the Food and Drug Administration agrees, the initial experiment will be outside a patient’s body. Researchers would place a pig-turned-humanlike liver next to a hospital bed to temporarily filter the blood of someone whose own liver suddenly failed. And if that novel “liver assist” works, it would be a critical step toward eventually attempting a bioengineered organ transplant — probably a kidney.

“It all sounds science fiction-ey but it’s got to start somewhere,” said Dr. Sander Florman, a transplant chief at New York’s Mount Sinai Hospital, one of several hospitals already planning to participate in the liver-assist study. “This is probably more of the near future than xenotransplantation,” or directly implanting animal organs into people.

More than 105,000 people are on the U.S. waiting list for an organ transplant. Thousands will die before it’s their turn. Thousands more never even get put on the list, considered too much of a long shot.

“The number of organs we have available are never going to be able to meet the demand,” said Dr. Amit Tevar, a transplant surgeon at the University of Pittsburgh Medical Center. “This is our frustration.”

That’s why scientists are looking to animals as another source of organs. A Maryland man lived two months after receiving the world’s first heart transplant from a pig last January — an animal genetically modified so its organs didn’t trigger an immediate attack from the human immune system. The FDA is considering whether to allow additional xenotransplantation experiments using kidneys or hearts from gene-edited pigs.

“That is something that in the long term may very likely contribute to the development of organs we can use in humans,” said Pittsburgh’s Tevar. He’s not involved with Miromatrix — and cautioned that the planned outside-the-body testing would be only an early first step.

The Miromatrix approach stems from research in the early 2000s, when regenerative medicine specialist Doris Taylor and Dr. Harald Ott, then at the University of Minnesota, pioneered a way to completely decellularize the heart of a dead rat. The team seeded the resulting scaffolding with immature heart cells from baby rats that eventually made the little organ beat, garnering international headlines.

Fast forward, and now at university spinoff Miromatrix sit rows of large jugs pumping fluids and nutrients into livers and kidneys in various stages of their metamorphosis.

Stripping away the pig cells removes some of the risks of xenotransplantation, such as lurking animal viruses or hyper-rejection, Ross said. The FDA already considers the decellularized pig tissue safe for another purpose, using it to make a type of surgical mesh.

More complex is getting human cells to take over.

“We can’t take billions of cells and push them into the organ at once,” Ross said. When slowly infused, “the cells crawl around and when they see the right environment, they stick.”

The source of those human cells: donated livers and kidneys that won’t be transplanted. Nearly a quarter of kidneys donated in the U.S. last year were discarded because hospitals often refuse to transplant less than perfect organs, or because it took too long to find a matching recipient.

As long as enough cells still are functioning when donation groups offer up an organ, Miromatrix biologists isolate usable cells and multiply them in lab dishes. From one rescued human organ the company says it can grow enough cells to repopulate several pig liver or kidney scaffolds, cells responsible for different jobs — the kind that line blood vessels or filter waste, for example.

In 2021, researchers with Miromatrix and the Mayo Clinic reported successfully transplanting a version of bioengineered livers into pigs.

That set the stage for testing a “liver-assist” treatment similar to dialysis, using bioengineered livers to filter the blood of people in acute liver failure, a life-threatening emergency. Doctors now have little to offer except supportive care unless the person is lucky enough to get a rapid transplant.

“If you can just get over the hump, then you might actually recover” — because the liver is the only organ that can repair itself and regrow, said Mount Sinai’s Florman. “I’ll be excited when they get their first patient enrolled and I hope that it’s with us.”

It’s not clear how soon that testing can begin. The FDA recently told Miromatrix it has some questions about the study application.

If the outside-the-body liver experiment works, what’s next? Still more research aimed at one day attempting to transplant a bioengineered organ — likely a kidney, because a patient could survive with dialysis if the operation failed.

While regrowing kidneys isn’t as far along, “I was completely stunned” at the progress so far, said Dr. Ron Shapiro, a kidney transplant expert at Mount Sinai.

He treats many older patients on dialysis who “will wait for years and years to get a kidney and likely die waiting on the list who would be perfect” for such experiments — if they come in time.

Jan 19, 2022: The photo caption of this story has been corrected to identify that the company is Miromatrix Medical.