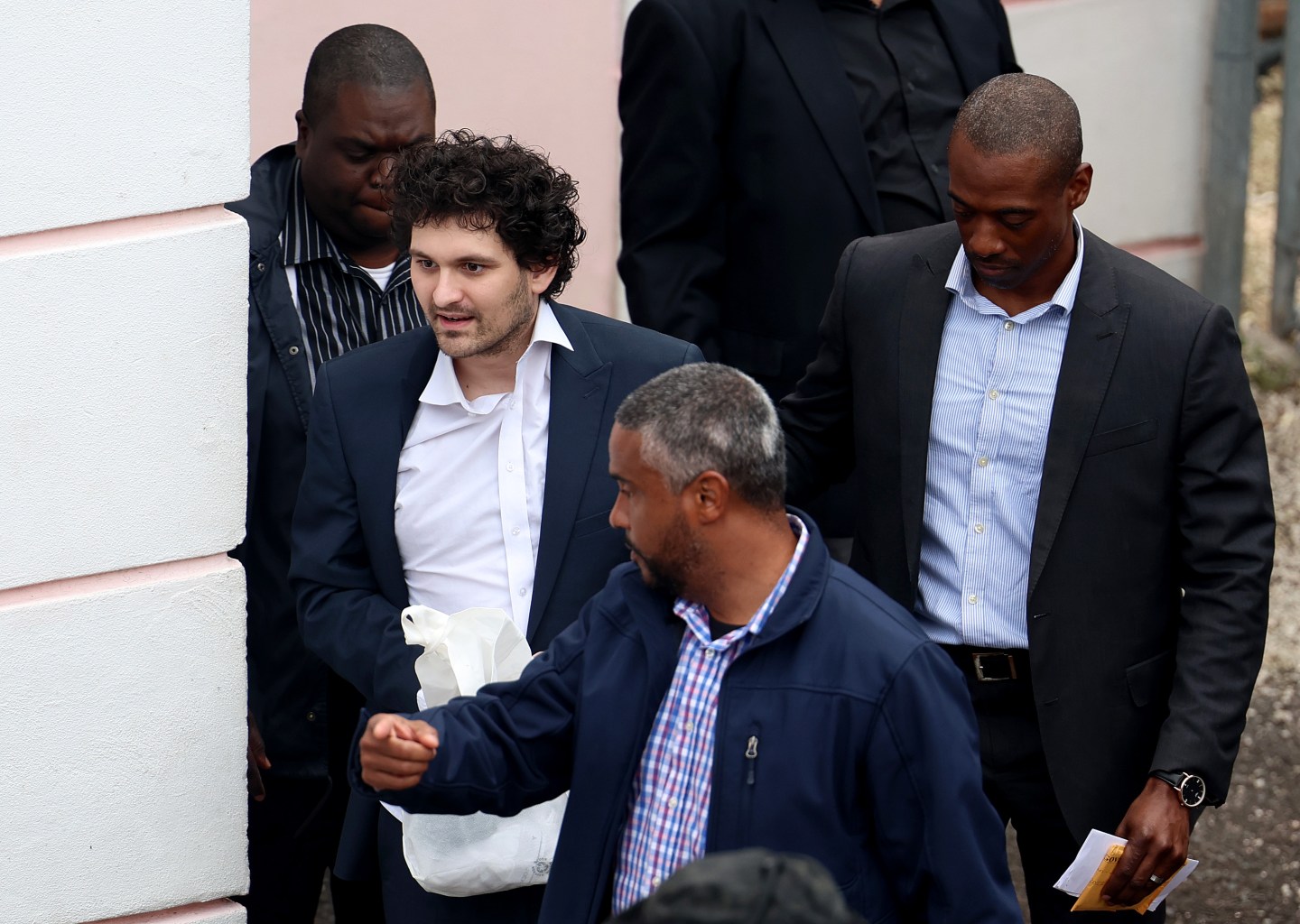 FTX co-founder Sam Bankman-Fried is escorted out of the Magistrate's Court on December 21, 2022 in Nassau, Bahamas.
Joe Raedle/Getty Images

Sam Bankman-Fried was released on a $250 million bail package after making his first US court appearance to face fraud charges over the collapse of FTX, the cryptocurrency exchange he co-founded.

Shackled and wearing a blue suit, Bankman-Fried appeared Thursday before a magistrate judge for the bail hearing in Manhattan federal court. He did not enter a plea, which will take place later before the judge presiding over his case.

The bail package includes a $250 million personal recognizance bond secured by his parents’ house in California. Its terms require him to stay with them and submit to electronic monitoring.

US Magistrate Judge Gabriel Gorenstein said that the risk that Bankman-Fried would flee was small and said he presented no danger to the public in terms of future financial crimes.

Bankman-Fried, 30, was charged in an indictment unsealed Dec. 13 by Manhattan federal prosecutors with orchestrating a yearslong fraud in which he used billions of dollars of FTX customer funds for personal expenses and high-risk bets through the exchange’s sister trading house, Alameda Research.

FTX’s collapse reverberated across an already-embattled cryptocurrency industry, prompting calls for further regulation as well as accountability for those who led the exchange. It was a stunning downfall for Bankman-Fried, a leading industry figure who was once estimated to be worth more than $25 billion and had emerged as major political donor.

In numerous media interviews following FTX’s November bankruptcy filing, Bankman-Fried has tried to argue the exchange’s collapse was due to management missteps, rather than intentional fraud.

That defense may be harder to maintain after Manhattan US Attorney Damian Williams announced Wednesday night that two of Bankman-Fried’s closest associates, former Alameda Chief Executive Officer Caroline Ellison and former FTX Chief Technology Officer Gary Wang, had pleaded guilty to fraud and were cooperating with the prosecution.

Bankman-Fried’s New York court appearance caps a roughly weeklong drama over his return to the US to face trial. Arrested Dec. 12 in the Bahamas at the request of US authorities, he initially indicated he would fight extradition.

After he was denied bail in Nassau and sent to the notorious Fox Hill prison, Bankman-Fried changed his mind. But his return to the US was delayed amid confusion in the Bahamas Magistrate’s Court until he finally left the island on a US government-chartered flight Wednesday night.

Williams announced Ellison and Wang’s pleas while Bankman-Fried was in the air.

Ellison pleaded guilty to seven offenses, including wire fraud and conspiracy to commit money laundering, in an agreement she signed on Dec. 19. Wang pleaded guilty to four charges. They face decades in prison on those counts but will almost certainly received leniency recommendations from the government based on their cooperation.

Legal experts have said the money being transferred to Alameda is very hard to explain as mismanagement rather than fraud, and his former associates’ testimony could be devastating for Bankman-Fried. Confronted by such witnesses, defendants in other cases have tried to turn the tables and cast them as the true bad actors.

Bankman-Fried could try to make a deal himself, but he may not get much leniency since he’s likely at the top of the prosecution’s target list. Meanwhile, more cooperators could emerge. Williams issued a warning to potential witnesses in a statement Wednesday night.

“If you participated in misconduct at FTX or Alameda, now is the time to get ahead of it,” Williams said. “We are moving quickly and our patience is not eternal.”